To attract pollinators the Australian Proteaceae join their columns together in floral compositions. Cunning in the green world and pyrotecnical look. 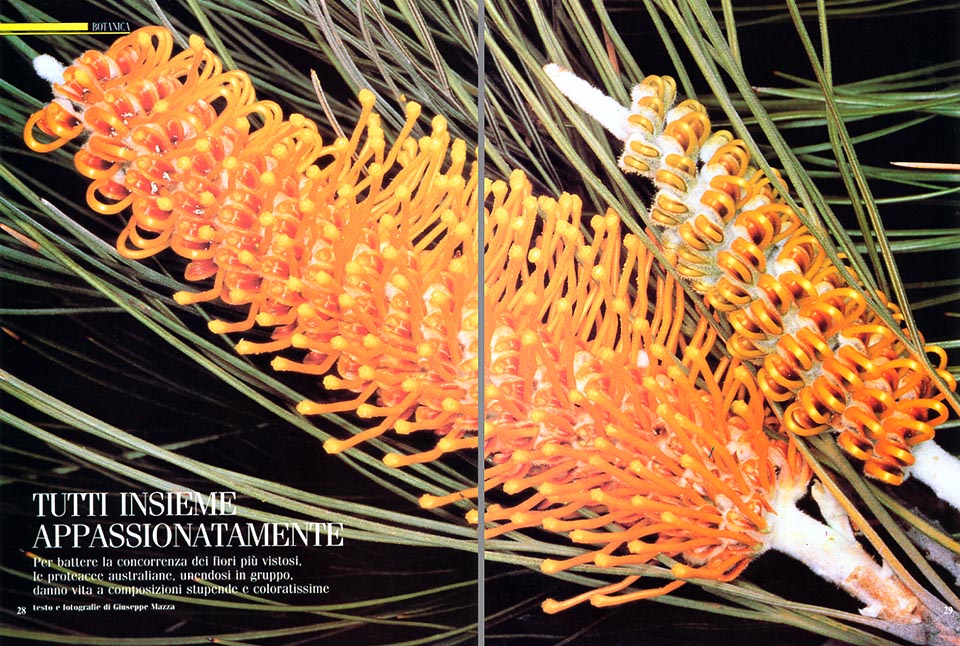 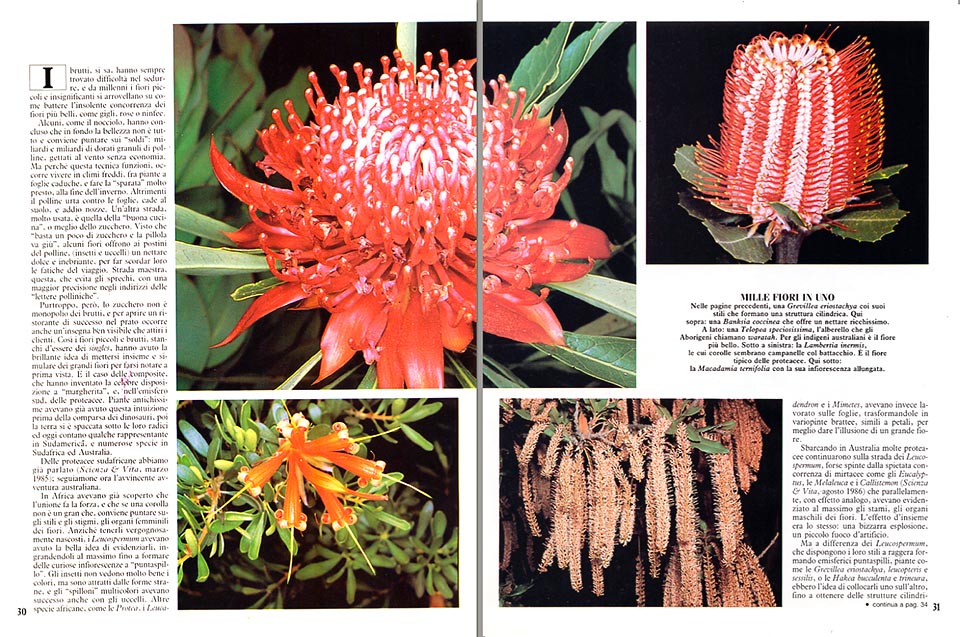 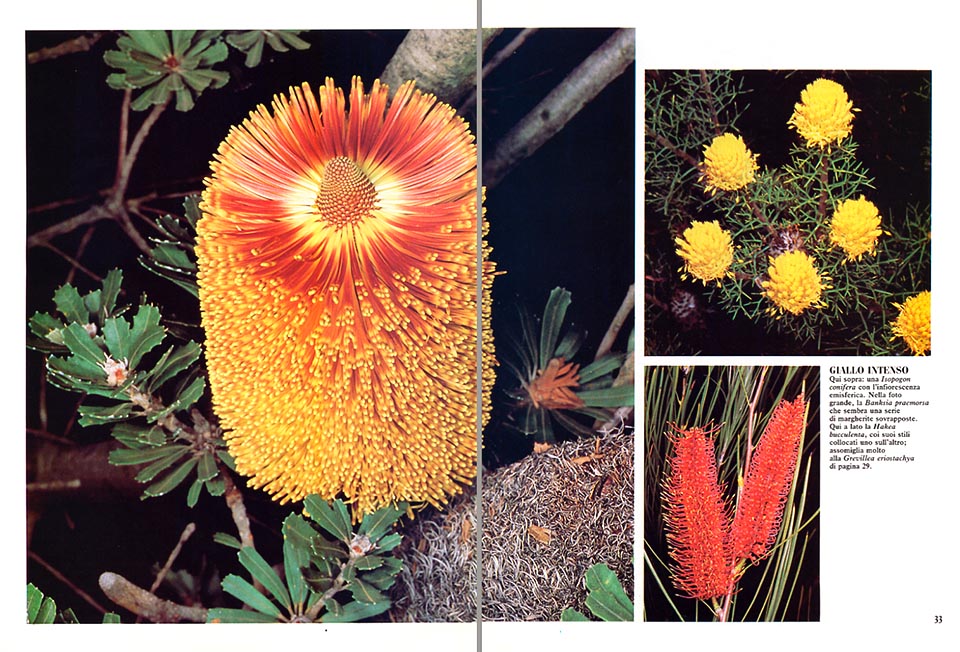 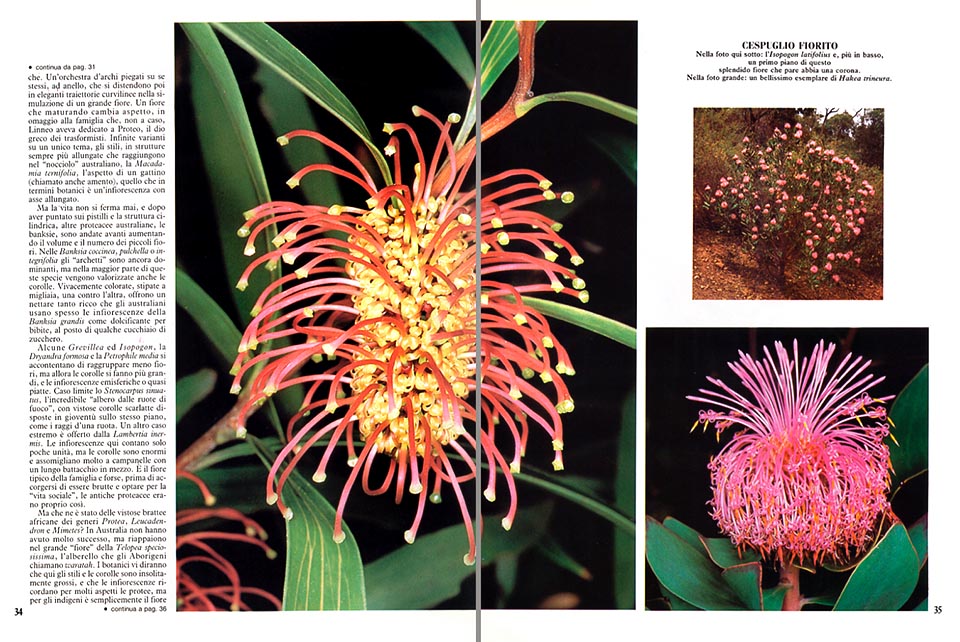 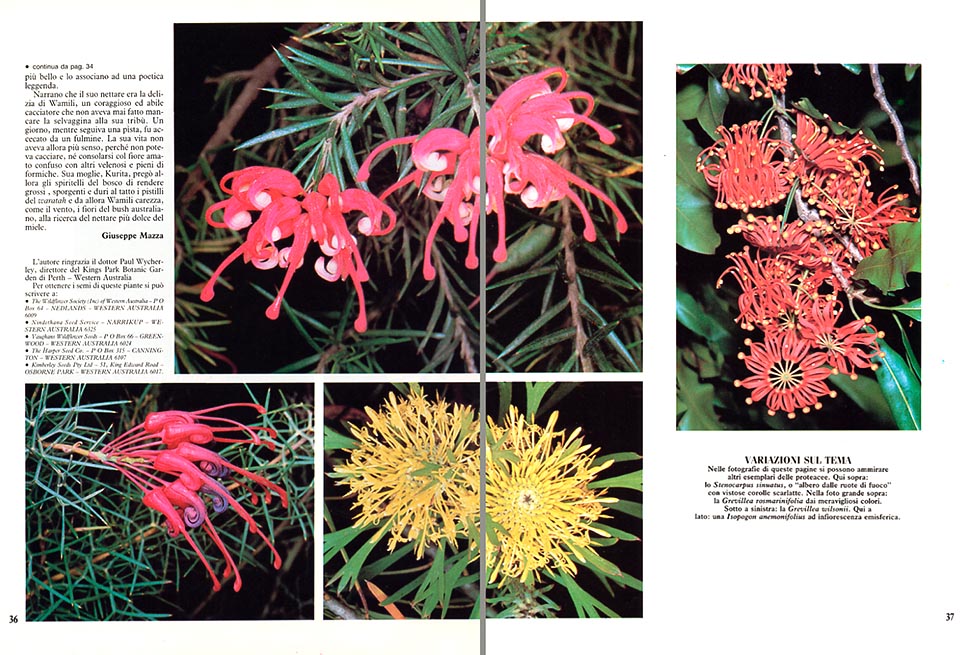 The ugly ones, it’s public domain, have always had difficulties in seducing, and since millennia the small and negligible flowers rack their brains about how to beat the competition of the lilies, the roses, or the water-lilies.

Some of them, such as the hazel, have concluded that, after all, beauty is not all, and that it is better to wager on the “money”: billions and billions of golden granules of pollen, thrown to the winds, freely. But, in order that this technique works, it is necessary to live in cold climates (where the life is difficult, odd coincidence, the money has always had a major grip), between plants with deciduous leaves, and effect the boasting very soon, by the end of winter. Otherwise, the pollen bumps against the leaves, falls on the ground, and goodbye marriage.

Another way, much used, is the one of the “good cuisine”, or better, of the sugar. Seeing that, as all know, “it suffices little sugar, and the pill goes down”, to offer the postmen of the pollen, insects and birds, a sweet and intoxicating nectar, with which they will forget the labours of the trip. Main road, this, which avoids the wastes, with a better precision in the addresses of the “pollen letters”.

Unluckily, however, the sugar is not monopoly of the ugly ones, and for opening a restaurant meeting with success in the meadow, it is required also a well visible signboard to attract the clients.

So, the small and ugly flowers, tired of being “single”, have had the idea, brilliant, to get together and simulate huge flowers, for being noticed at first sight. It is the case of the asteraceae, which have invented the celebrated “daisy-like” disposition, and, in the southern hemisphere, of the Proteaceae.

Very ancient plants had already got this intuition before the appearance of the dinosaurs, then the earth has split under their roots, and now they have some representatives in South America, and several species in South Africa, and Australia.

We have already been talking about the South African Proteaceae, now we shall follow their exciting Australian adventure.

In Africa, they had already discovered that union is strength, and that if one corolla is not up to much, it is better to concentrate on the styles and the stigmata, the feminine organs of the flowers.

Instead of keeping them modestly hidden, the Leucospermum had the nice idea to put them in evidence, enlarging them at the maximum, till to form odd “pincushion” inflorescences. The insects do not see well the colours, but are attracted by the strange shapes, and the many-coloured “pins”, were meeting with success also with the birds.

Other African species, such as the Protea, the Leucodendron, and the Mimetes, had, on the contrary, operated on the leaves, transforming them in variegated bracts, similar to petals, for better giving the illusion of a big flower.

Arriving in Australia, many Proteaceae continued on the way of the Leucospermum, maybe pushed by the pitiless competition of Myrtaceae, like the Eucalyptus, the Melaleuca, and the Callistemon, which, in a parallel way and with analogous effect, have emphasized at the maximum, the stamens, the masculine organs of the flowers.

The effect of the whole was the same: an odd explosion, a small firework.

But, unlike Leucospermum, which dispose their styles like a halo of rays, forming hemispherical pincushions, plants like the Grevillea eriostachya, G. leucopteris and G. sessilis, or the Hakea succulenta and H. trineura, they had the idea to place them one over the other, thus obtaining some cylindrical structures.

An orchestra of bows bent on themselves, like a ring, which then stretch in elegant curvilinear trajectories in the simulation of a great flower. A flower which changes look while ripening, a homage paid to the family, which, not by chance, Linnaeus had dedicated to Proteus, the Greek god of the quick-change artists.

Endless variants on a unique theme, the styles, in structures always more prolonged, which reach, in the Australian “hazel, the Macadamia ternifolia, the look of a kitten.

Odd return to the first solution of the ugly ones, odd analogy, for the plants, with the evolution of the marsupials which have “remade”, in their own way, in Australia, the typical forms of the placentate animals.

But life never stops, and after having operated on the pincushions and the cylindrical structure, other Australian Proteaceae, the banksias, have gone ahead, increasing the volume and the number of the little flowers.

In the Banksia coccinea, B. pulchella or B. integrifolia, the “bows” are still predominant, but in most of these species are emphasized also the corollas. Lively coloured, packed by thousands, one against the other, offer such a rich nectar, that the Australians utilize often the inflorescences of the Banksia grandis as sweeteners for drinks, in lieu of some spoons of sugar.

Some Grevillea and Isopogon, the Dryandra formosa and the Petrophile media, content themselves in uniting less flowers, but then the corollas become bigger, and the inflorescences almost flat or hemispherical.

A marginal case if the Stenocarpus sinuatus, the incredible “Queensland Firewheel Tree”, with showy scarlet corollas, placed, when young, on the same level, like the radiating bars of a wheel.

Other extreme case is offered by the Lambertia inermis. Here the inflorescences are very few, but the corollas enormous: similar to little bells with a long clapper in the middle. It is the typical flower of the family, and maybe, before realizing that they were ugly, and therefore opting for the “socialist life”, the old Proteaceae were like this.

But, what happened to the showy African bracts of the genera Protea, Leucodendron and Mimetes ?

In Australia, they did not meet with much success, but they apepar again in the huge “flower” of the Telopea speciosissima, the sapling natives call waratah. The botanists will tell you that here the styles and the corollas are unusually large, and that the inflorescences recall, under many aspects, the proteas, but for the natives, it is simply the most beautiful flower in the bush, and associate it to a poetic legend.

They say that its nectar was the delight of Wamili, a brave and skilful hunter who had always provided of game his tribe. One day, while following a trail, he was blinded by a thunderbolt. His life then became meaningless, because he could not go hunting any more, and not even could he be comforted by his loved flower, muddled with others, which were poisonous, and full of ants. His wife, Kurita, prayed then the elves of the wood, to render large, projecting and hard to the touch, the pistils of the waratah, and since then, Wamili fondles, like the wind, the flowers of the Australian bush, looking for their nectar, which is sweeter than honey.