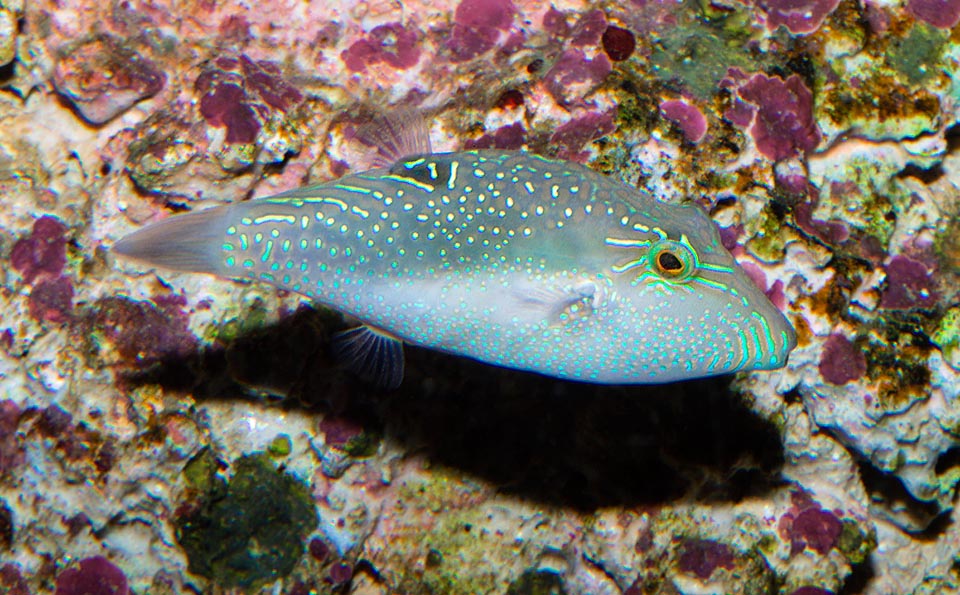 Canthigaster bennetti, present in all Indo-Pacific tropical waters, is one of the less gaudy of the group, with a livery extremely changeable depending on the environment © Giuseppe Mazza

The name of this genus, comes from the Greek “Κανθήλια” (kanthelia) = basket and “Γαστήρ” (gaster) = belly, due to the capacity these fishes have of inflating the belly like a balloon, filling it up with water. The species bennetti, of Bennet in Latin, honours the memory of John Whitchurch Bennett who lived between 1816 and 1827 in Ceylon, presently Sri Lanka, publishing a book about the local fishes. 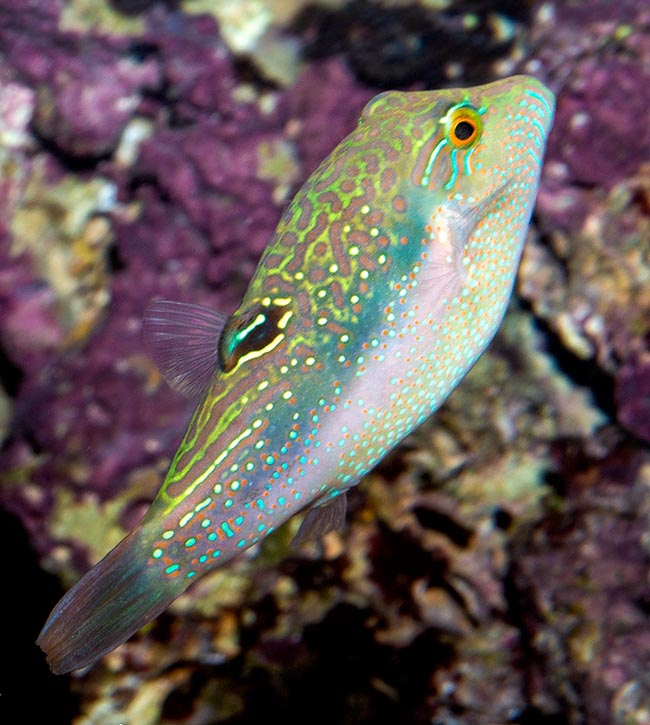 Actually, the Canthigaster bennetti has a much wider diffusion seen that it can be found in all tropical waters of the Indo-Pacific.

It stands out at first sight from the congeners because of the less showy and rather variable livery depending on the environment, with greenish and sand colour livery, more consistent with the seagrass meadows and the detrital and sandy bottoms it frequents: flat coasts covered by algae and the calm waters of the lagoons with few madreporic formations, sites usually having no bright colours.

Rarely goes down under the 15 m of depth and it can be found also in one metre of water.

The stocky body, vaguely oval and compressed on the sides, does not exceed the 10 cm of length and in the whole follows the pattern typical of the Canthigaster: no scales and a sort of under-skin armour with openings for the eyes, the mouth, the fins, the gills and the anus.

The muzzle, as usual placed in advanced position, ends in a beak formed by 4 teeth: the two incisors of the upper jaw and the equivalents of the lower one. All other teeth have been lost, little by little, during the evolution of the Tetraodontidae whilst in their close relatives, the Diodontidae, these last two incisors have merged in one unique solid tooth per jaw.

The upper part of the body is at first sight greenish but observing well we note reddish brown patterns and more or less pale yellow traits, depending on the environment where it moves, until to completely disappear during the sleep of the night hours. 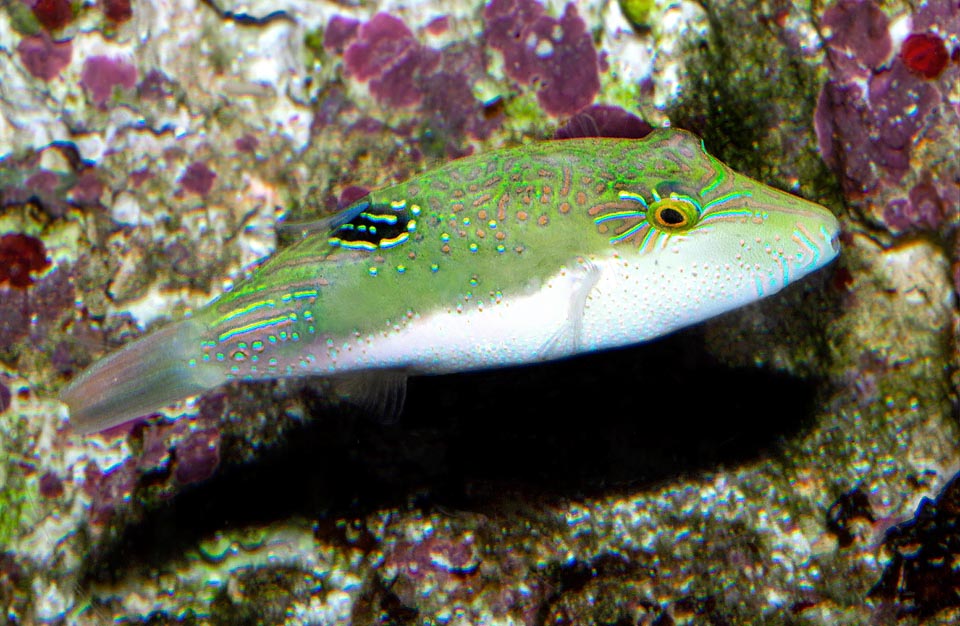 Even if not forgetting gasteropods, bryozoans, small worms, sponges and tasty bites to the appendages of cirripedians, its diet is based mostly on the filamentous green algae. It lives mainly in calm waters on detrital bottoms and in the submerged prairies, where the back gets green and the belly, like the sand, turns pinkish white © Giuseppe Mazza

The livery continues downwards with a white-pinkish belt and small pink spots whilst the ventral zone displays a pale, greenish blue dotting, merged in traits towards the muzzle.

A black yellow circled dot at the base of the dorsal fin, reminds us the Canthigaster solandri whilst the showy rays starting from the eye follow the scheme of the Canthigaster amboinensis. Beyond a clear air of family, to camouflage the eyes with drawings that confuse the ideas and create fake eyes in backward position is a classical strategy of survival in the vast world of the small fishes. 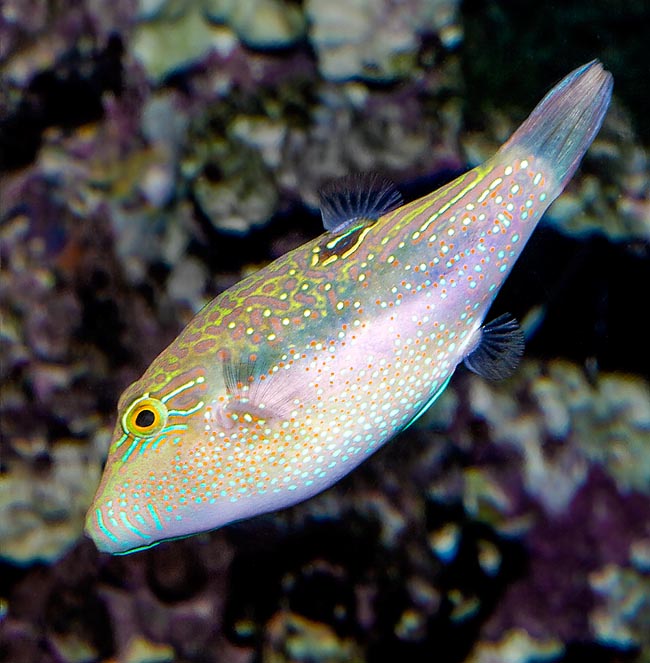 Moreover, gulping water up almost to burst, also the Canthigaster bennetti can transform in a ball difficult to grab and swallow, not to mention that the skin, as well as the bowels, are soaked with a powerful deterrent venom: the tetrodotoxin.

This species mainly nourishes of filamentous green algae, but also of small invertebrates such as sponges, gasteropods, bryozoans, small worms and some greedy bite to the appendages of the cirripedians and to the sponges.

Camouflaged as it is, usually it avoids unpleasant encounters, but if attacked, like all Canthigaster, it swells with water in order to appear bigger and so not to be seized, perhaps also a way to remind the predators that its skin and the bowels are imbued with a powerful venom: the tetrodotoxin.

The adult males, little bigger than the females, have a territory that incorporates the smaller fiefs of the partners that form its harem.

When one of these is ready to lay, it builds a small nest of algae and attracts the male with a nuptial parade, at once reciprocated.

As soon as laid, the eggs are fecundated, but then, as customary for these fishes, the paternal cares stop here. The larvae, that are born after a few days, are dispersed by the currents.

The resilience is good, with populations that, in case of need, can double in less than 15 months, and considered also the enormous diffusion of the species, nowadays (2019) the vulnerability index of the Canthigaster bennetti stands among the lowest extant ones, marking only 10 on a scale of 100.

Canthigaster bennetti was last modified: May 3rd, 2022 by Peppino