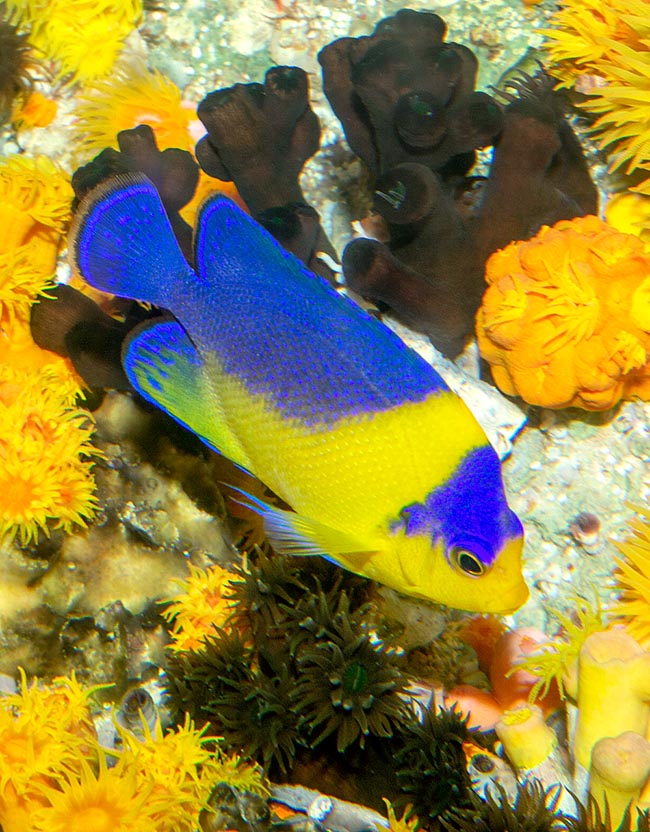 Described only in 1969, Centropyge venusta is a species with relatively modest area in West Pacific © G. Mazza

Centropyge venusta (Yasuda & Tominaga, 1969),  known in various languages as Blue-backed angelfish or Purple Mask angelfish, belongs to the class of the  Actinopterygii, the ray-finned fishes, to the order of the  Perciformes, and to the family of the  Pomacanthidae, rightly the one of the Angelfishes, that, counts 8 genera and almost one hundred coloured species.

Fishes that at times may even exceed the 40 cm, like the majestic Pomacanthus maculosus or the Pomacanthus annularis, frequent guests of the public aquaria, such as the Pomacanthus paru, the Holacanthus ciliaris,  or the Holacanthus bermudensis, but also small fishes like those belonging to the genus Centropyge, the most numerous of the family that nowadays counts, in 2020, more than 30 species.

The Pomacanthidae gather marine tropical fishes of rather shallow waters, characterized by a body strongly compressed on the sides and an eye-catching defensive spine at the base of the operculum.

There are of course no exceptions for the genus Centropyge, which derives from the Greek “kέντρον” (kentron)  = sting, and “πυγή” (pyg)  = back, with reference to this spine facing the tail.

The specific term  venusta  comes from the Lain “venustus” = full of carm, perfect in beauty and movements, like the goddess Venus, that finds however an analogous root in the Latin “venus” = beauty.

Described only in 1969, Centropyge venusta  presents with a relatively modest distribution area in western Pacific. We find it in the Palau Islands and then, northwards, in the Philippines, Taiwan and in the Ryukyu Islands, upto southern coasts of Japan.

It is a sedentary species, shy and difficult to approach, that lives hidden among the corals, solitary, in couples or in small schools  led by a male. At times can be found camouflaged upside down, in the cliff grottoes and in the steep overhangs of the reefs, usually at 10-40 m of depth. 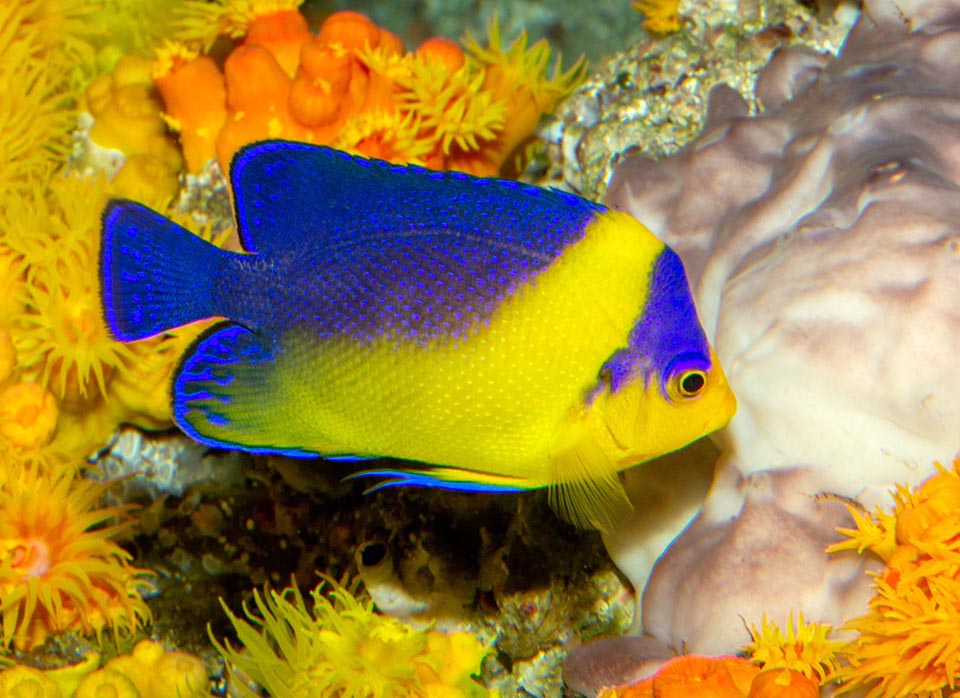 Very shy fish, at most 12 cm long, living hidden among corals, solitary, in couple or in small schools led by a male defending a small territory © Giuseppe Mazza

The head, pointed, shows big fleshy lips equipped like the Chaetodon  of tiny teeth arranged like a brush. Finally, is not absent, as we have seen, the usual spine typical to the Pomacanthidae at the base of the operculum. 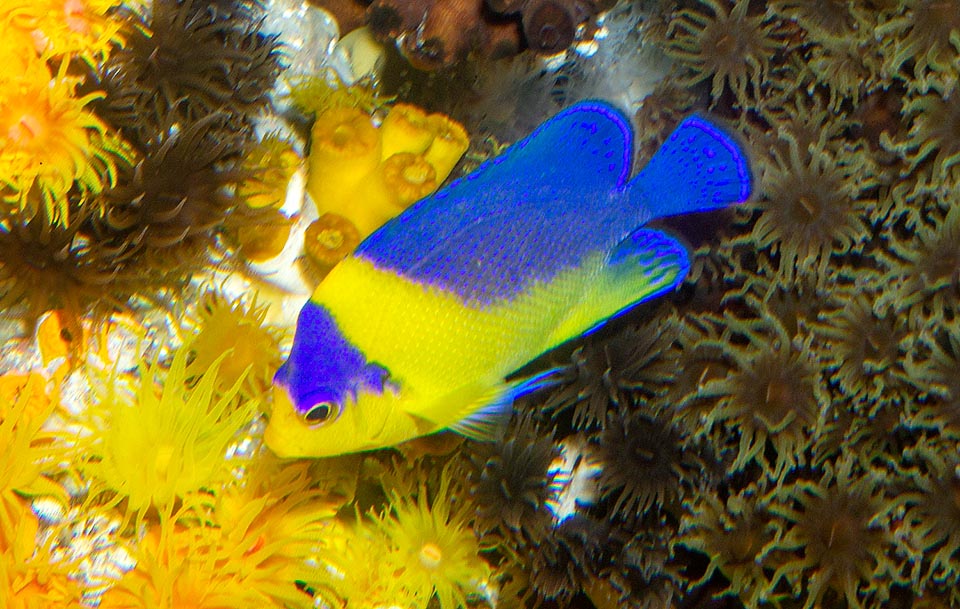 The yellow and blue livery divides in two diagonally the body. Blatantly boisterous, is actually mimetic in the light and shadow reefs play © Giuseppe Mazza

Centropyge venusta nourishes of algae, tunicates, sponges and sea squirts. Even if at times it is fished for the domestic aquaria, by sure it is not a fish for beginners, because, nutritional problems aside, it gets easily sick and does not tolerate the slightest pollution. It is a proterogynous hermaphrodite species with one dominant male and some females inserted in a small harem. When the leader passes away, the biggest female may change sex and take over the command. 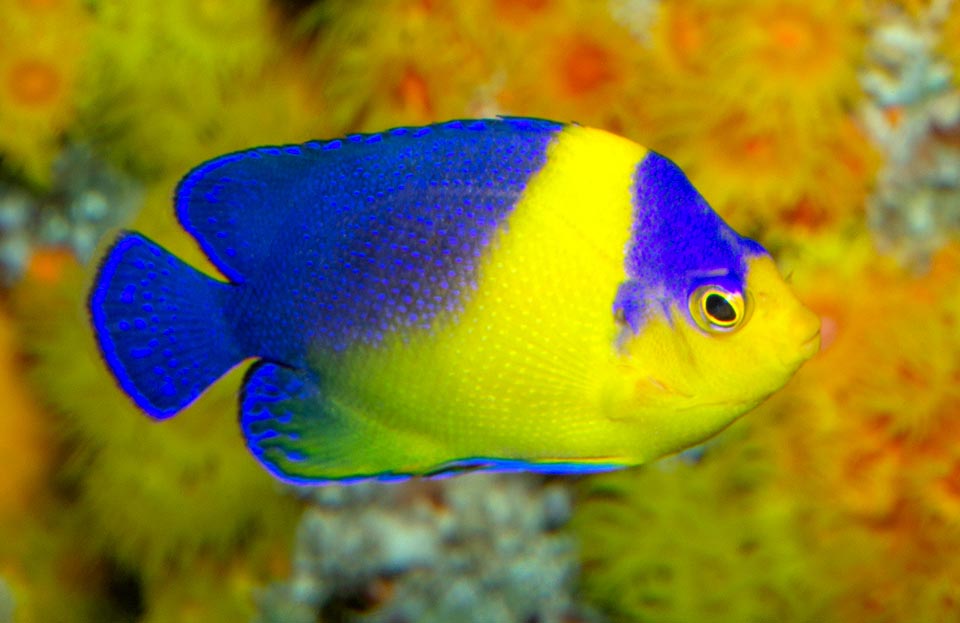 It’s a proterogynous hermaphrodite species with females that can change sex. It hybridizes with Centropyge multifasciata © Giuseppe Mazza

The fecundation takes place on the surface and are possible hybridizations with Centropyge multifasciata, species with a vaster distribution area, partly overlapped. Eggs and larvae are pelagic.  Once exhausted the small reserves of the yolk sac, they nourish of plankton and the small fishes get quickly the look of the adults. In nature the populations can double in less than 15 months and the vulnerability index is presently moderate, marking 28 in scale of 100.