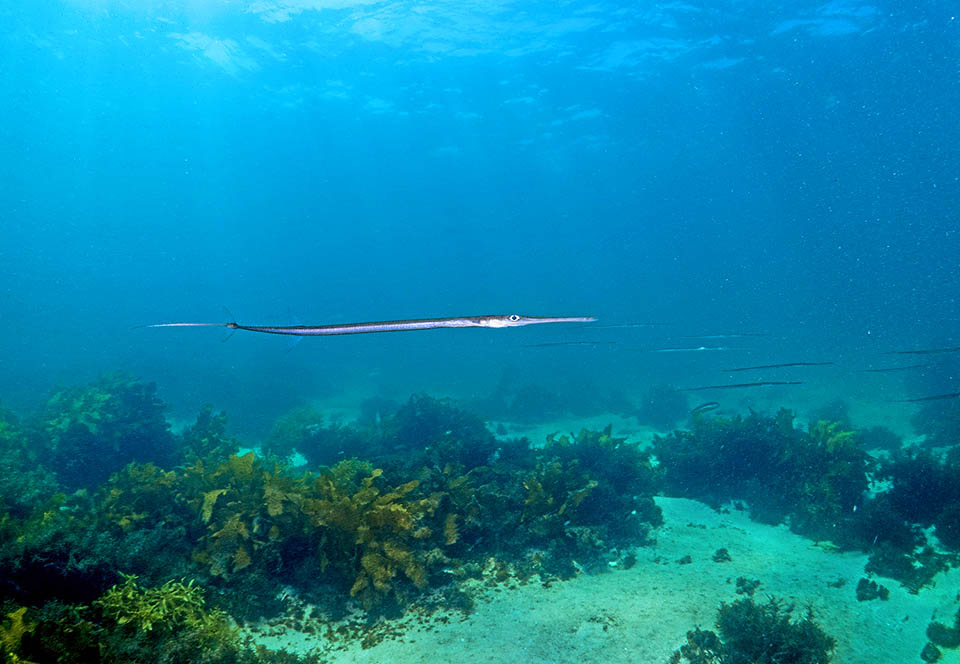 But there is something in common. 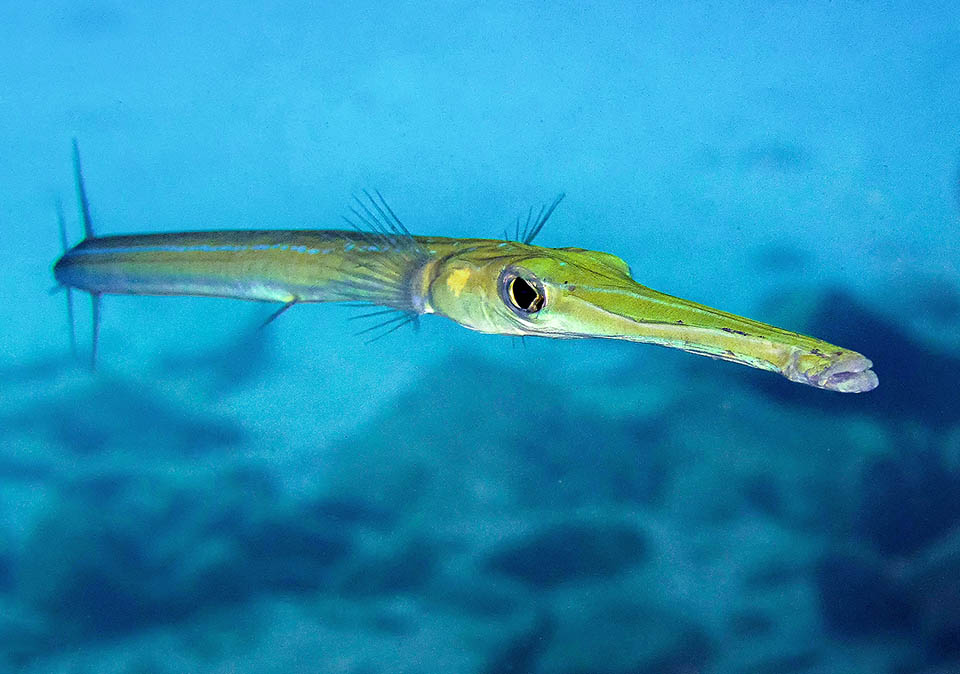 Inserted in the family of the Fistulariidae, the Smooth flutemouth in fact belongs with these to the varied and imaginative order of the Syngnathiformes, the ray-finned bony fishes that have in common the body protected by a series of bony rings and a characteristic long cylindrical snout that immediately catches the eye, except the small Bulbonaricus brauni that has it only when young because loses it while growing.

It is a particular suction tube, born from the fusion of the jaws, that these fishes utilize as a pipette for catching the preys. 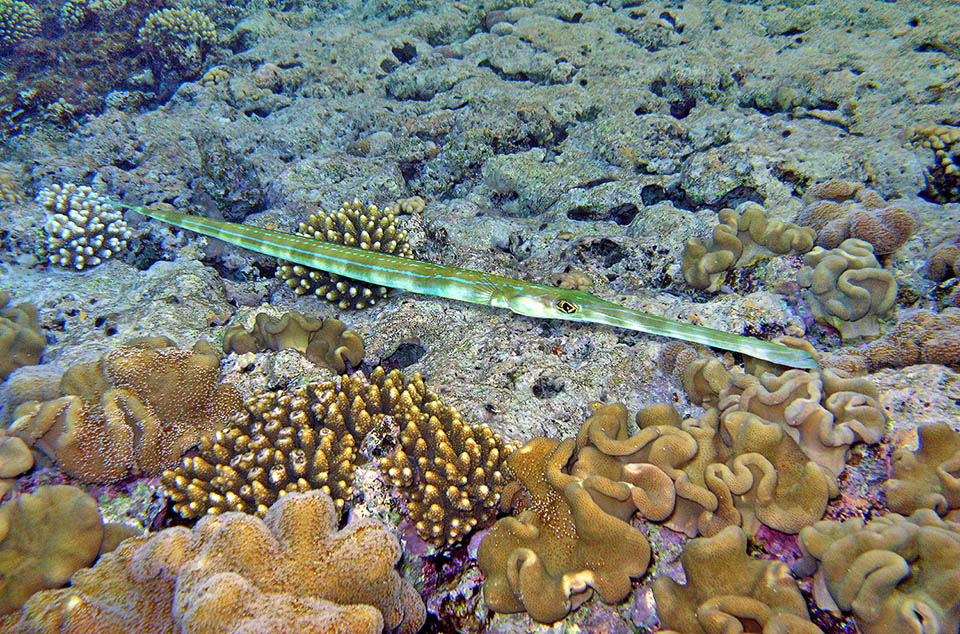 The very slender body with a slight dorso-ventral flattening, can reach 160 cm. The head itself occupies about 1/3 of the length © Gianemilio Rusconi

The name of the genus Fistularia originates once more, with reference to this tool, from the Latin “fistula”, tube, flute, whilst the specific term Commersonii honours the memory of Philibert Commerson (1727-1773), well known French botanist and ichthyologist, world traveller with the famous expedition of Bougainville, who then abandoned him, extremely angry, in the island of Mauritius, as, against the rule, had brought his wife aboard disguised as a valet. 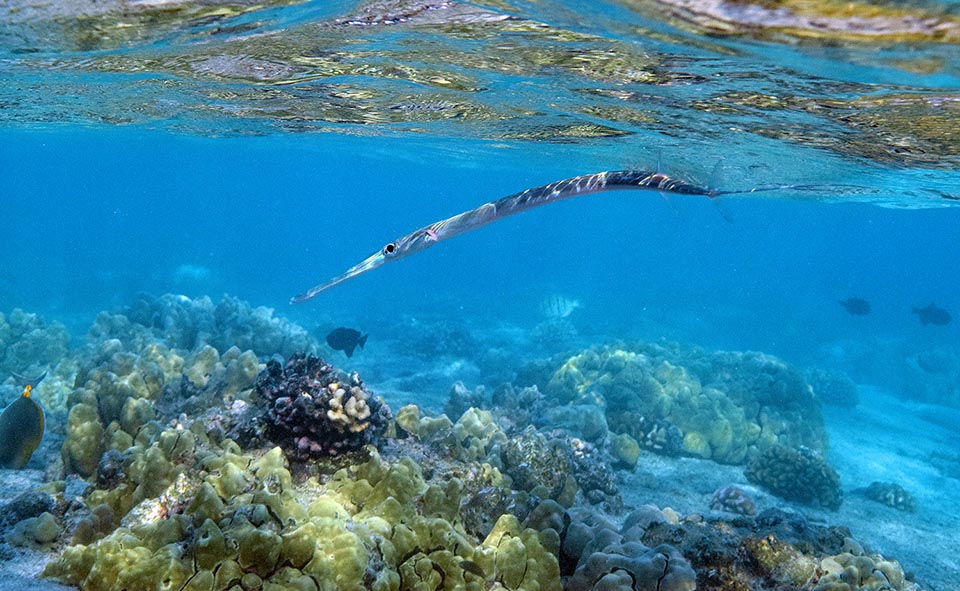 It often swims, like this, in shallow waters but can go down up to more than 130 m of depth accepting temperatures between 15 and 30 °C © Kris Bruland

Indicatively, starting eastwards from the Red Sea, we find it along the whole African coast up to South Africa, and then along the Madagascar ones, the islands of Mayotte, Comoros, Seychelles, Réunion, Mauritius and Rodriguez.

It is present in the Chagos Islands, the Maldives, the Andaman, Christmas Island, in Timor-Leste, in Indonesia, Malaysia and Papua New Guinea.

From here, northwards, after the Philippines, it reaches Vietnam, Taiwan, China, Korea and Japan, whilst southwards, after Australia, has colonized, heedless of the cold, the waters of New Zealand. 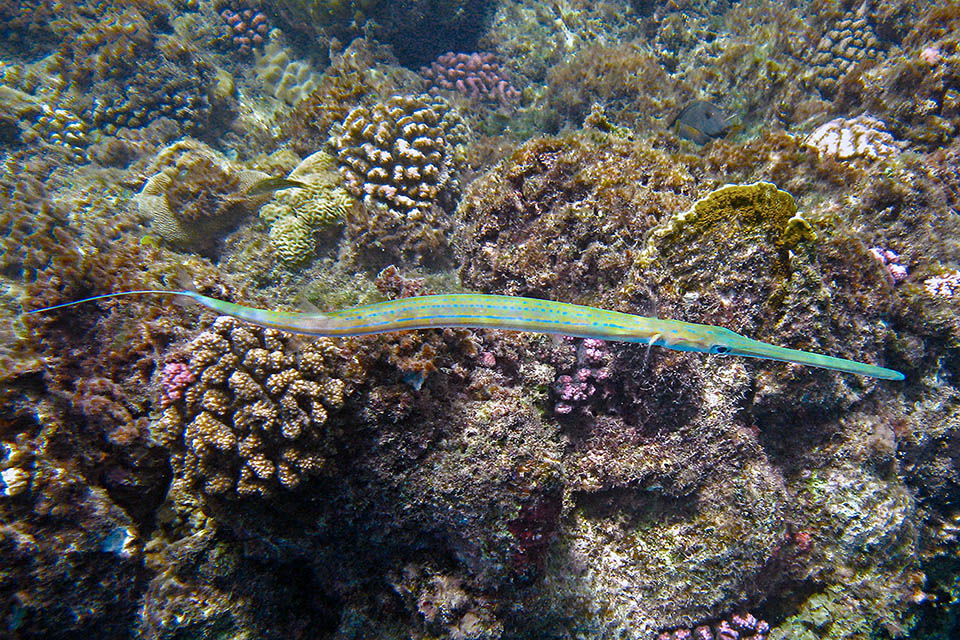 Usually moves very slowly, with almost imperceptible movements of the fins, but goes ahead also, when necessary, waving the body © Gianemilio Rusconi

No one stops it to the east, as, after Micronesia, Polynesia and Hawaii, it reaches the Galapagos, Mexico and all the Pacific American coast up to Chile.

With all this we might already talk of a record, but not yet satisfied, coming from the Red Sea through the Suez Canal, the Smooth flutemouth has also invaded the Mediterranean thus joining the numerous Lessepsian species, so called with reference to Ferdinand de Lesseps, promoter and executor of the Canal.

In 2001 Fistularia commersonii was caught for the first time in Greece and in Turkey; in 2004 it reached southern Italy and Tunisia, and nowadays is present also along the southern coasts of France and Spain. 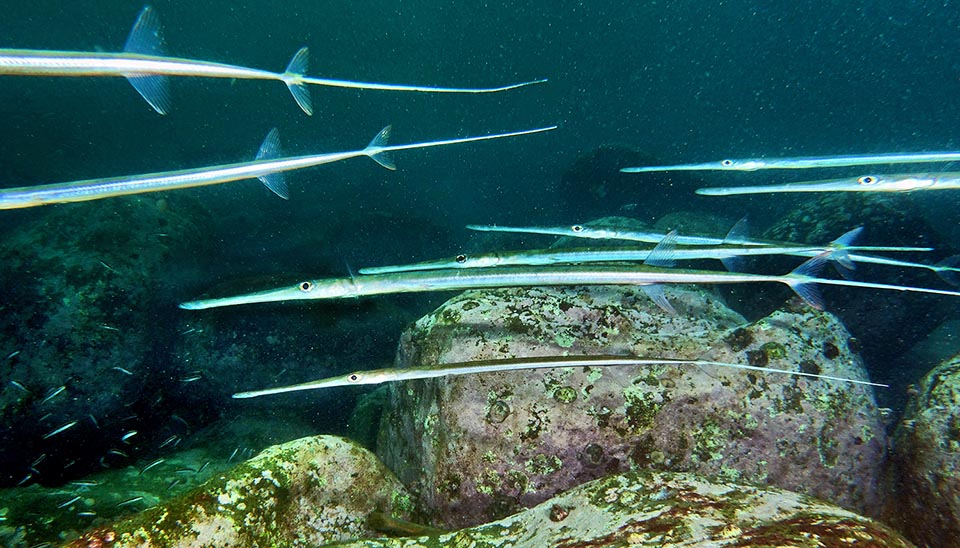 It seems that all this has been generated by a small school of invaders, entered only once, by chance. As a matter of fact, in the Mediterranean, even if the species is growing strongly, that generic diversity met elsewhere is absent.

Infrequent on the mobile bottoms and in the submerged grasslands, the Smooth flutemouth does not hesitate to venture in very shallow waters among rocks and corals, reaching, as it has been observed, the 132 m of depth. 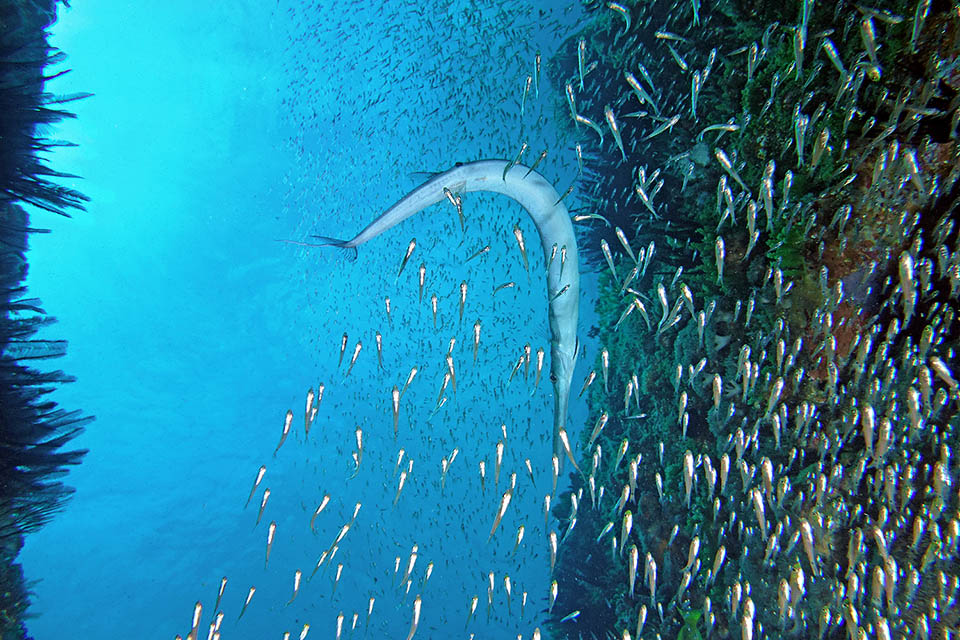 Swooping from above with a rapid inversion this will kill a school of fry. The Smooth flutemouth nourishes also with small crustaceans and cephalopods © John Turnbull

Benthopelagic, it adapts to various environments and temperatures included between 15 and 30 °C.

Usually, Fistularia commersonii measures about one metre, but in the bigger males it may reach 160 cm and a weight of 4 kg.

The body, with a slight dorso-ventral flattening, is particularly slender. 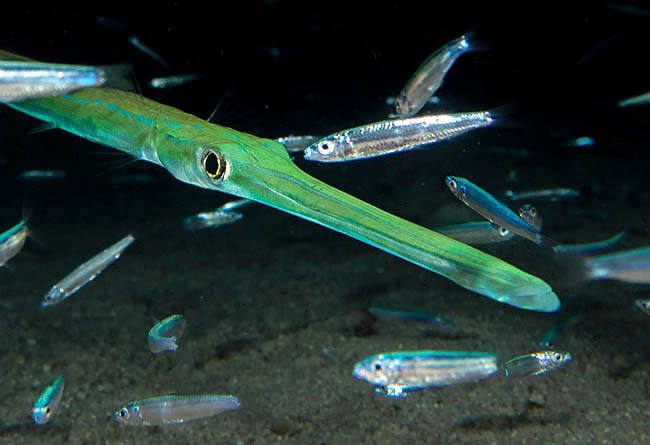 This one, with its innocent look, seems to look for a bigger fish © Rafi Amar

The head, tapered in the long tube, occupies itself about 1/3 of the total length, with a small mouth that contracting and expanding rapidly, sucks up the prey.

Proportionally, the eye is very big with an unusually elongated snout.

The modest pectoral ones have 13-15 rays and the pelvic, almost invisible, 6 rays.

But what is most surprising is the bifurcated caudal fin with a long white filament in the centre, formed by two rays and rich in sensors it utilizes for locating the preys.

The Smooth flutemouth usually swims very slowly, with almost imperceptible movements of the fins, but goes ahead also waving the body that can impress, by folding on itself, even rapid changes of direction and jerks.

Usually, the back is of a pale-olivaceous beige colour tending to green, run by two light blue-bluish lines that enclose two rows of mimetic spots of analogous colour.

The belly is silvery for camouflaging, seen from below, with the shimmering surface of the sea and reveals by night a livery with dark vertical bands it uses at times with lesser intensity also during the day when it is stressed and wants to evade intrusive glances. 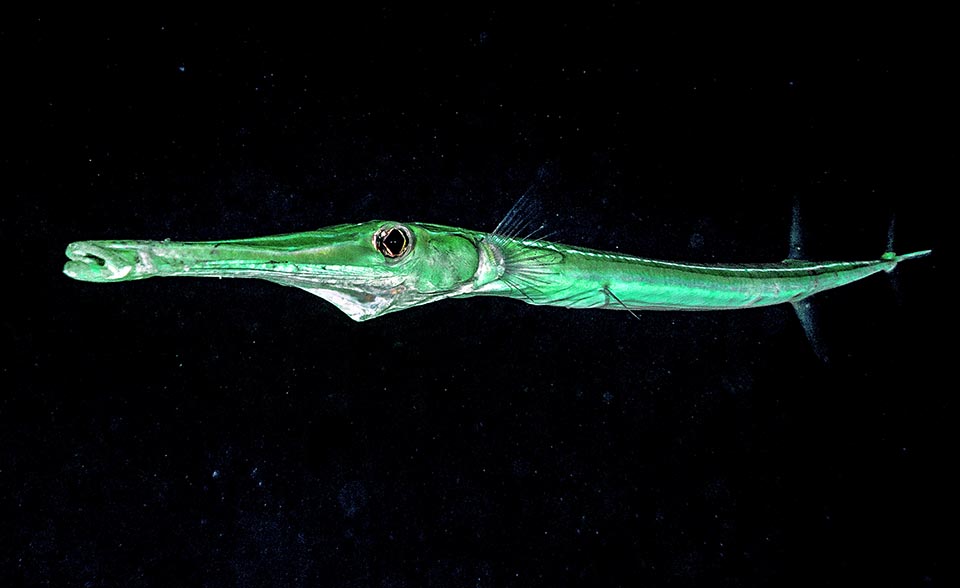 The sucking tube, meteoric, has just gulped down the prey. Note also the unusual big eye with pupil pointing towards the snout © Rickard Zerpe

Sometimes it surprises them by going adrift like a wood, a little bit like they do inside the same order the Common seadragon

(Phyllopteryx taeniolatus) or the Robust ghost pipefish (Solenostomus cyanopterus), but goes hunting also mixing with fishes that are peacefully moving in school, way also this for not being seen, as does with the same surprise effect the Aulostomus chinensis, another Syngnathiformes that often swims in the shade of turtles and of big fishes. 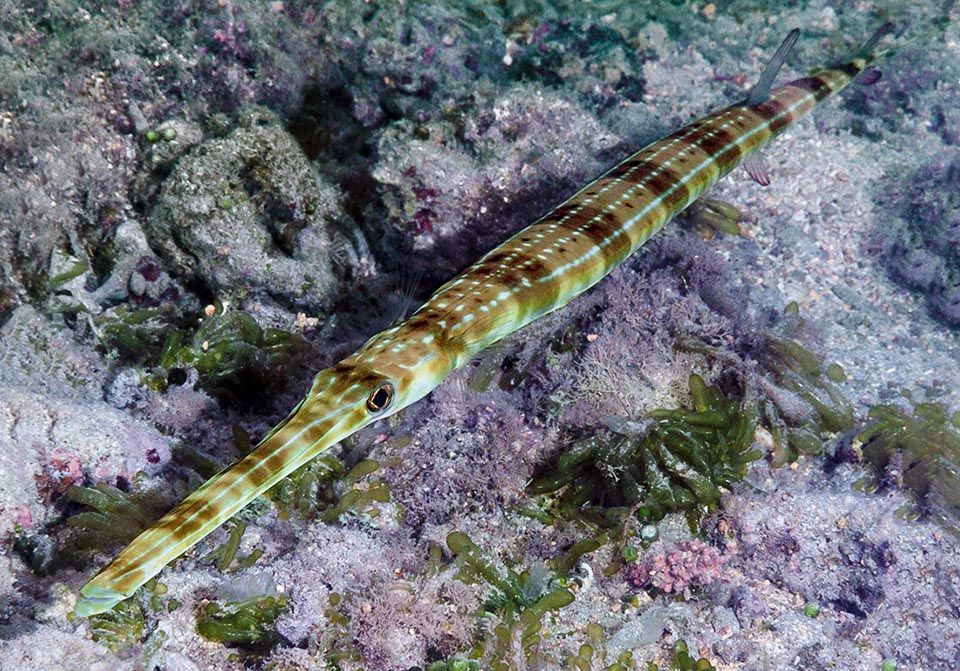 When stressed the Smooth flutemouth often overlaps to the normal livery, weakly, the night one, with a drawing having dark rings © François Libert

But, unlike the seahorses, the Smooth flutemouth does not guard the fecundated eggs in a pouch and does not even dream to stick them under the tail as dragonfishes and pipefishes do.

Little is known about the modalities and the duration of the reproductive season that may last even several months depending on the temperature of the water.

Off the California coasts, for instance, the matings occur between June and August. 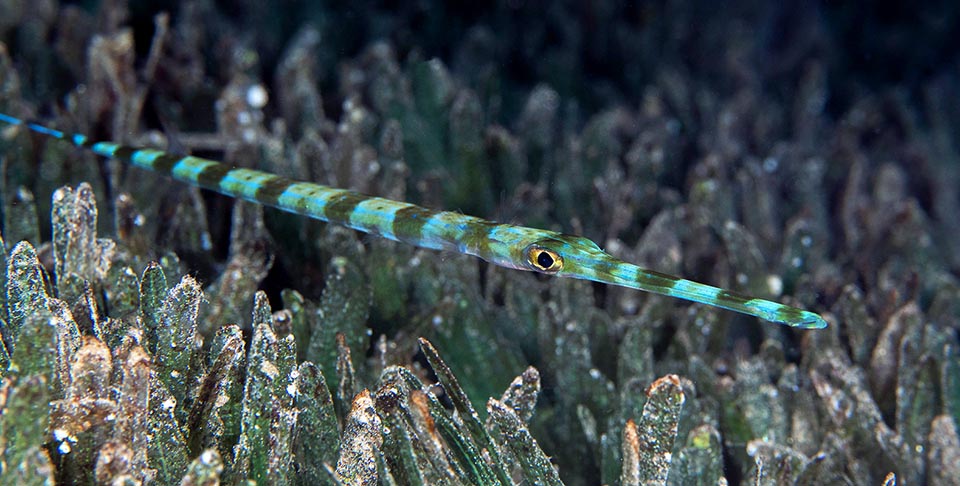 If these bands during the day contribute to mimicry, in the night darkness they completely break the outline of the fish rendering it almost invisible © Rafi Amar

After the fecundation in the open sea, the eggs are entrusted to the currents, as indeed happens with the razorfishes (Aeoliscus strigatus), they too close relatives.

The larvae have a very long pelagic life, and if on the one hand they run big risks, this has contributed to the enormous diffusion of the species.

The Smooth flutemouth is edible and can be consumed fresh, salted, dried or smoked, but surely its flesh is not prized and the catch is mainly transformed into fish flour. 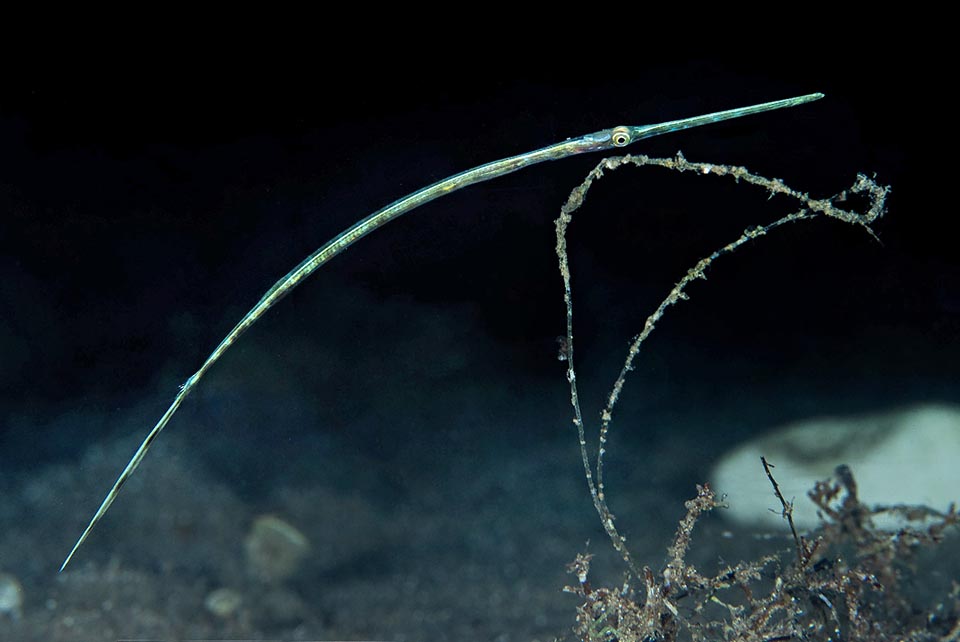 Fistularia commersonii doesn’t guard the eggs in a pouch like the seahorses, or under the tail as the dragonfishes and the piperfishes do but entrusts them to the currents. The larval pelagic life is long and full of dangers, but on the other hand has allowed the vast diffusion of the species. Here a juvenile having recently reached the bottoms © Rafi Amar

Presently, in 2022, the resilience is good with a possible doubling of the populations in less than 15 months and a still moderate vulnerability to fishing that marks just 42 on a scale of 100.

It appears, therefore, as “Least Concern” in the Red List of the endangered species, because at the moment does not cause great concern.