From the far east to Rome the route of spices

From the far east to Rome the route of spices. 2000 years ago pepper, cinnamon, nutmeg, clove and many other spices no longer used, already arrived in the Mediterranean. 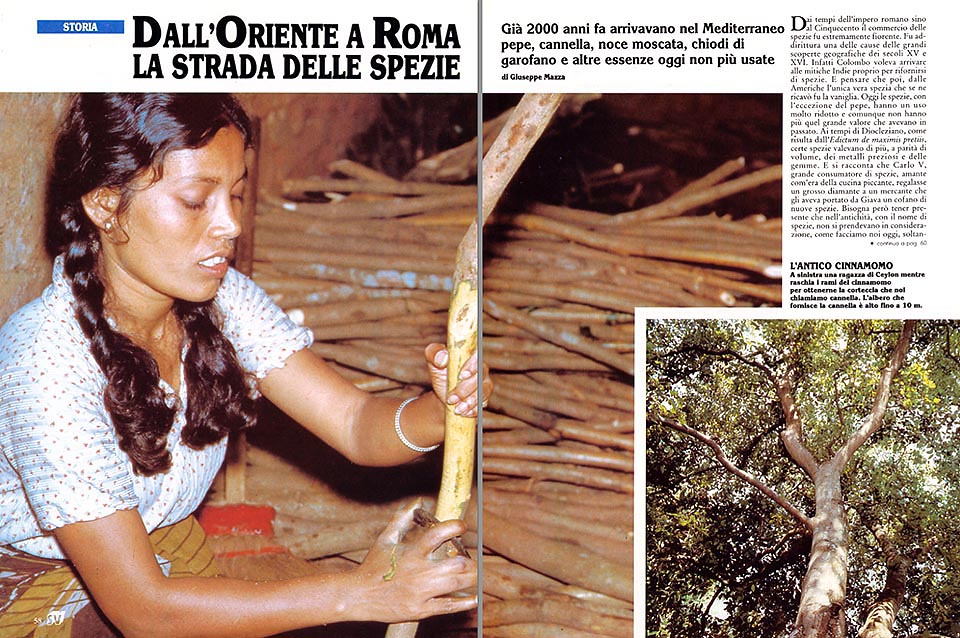 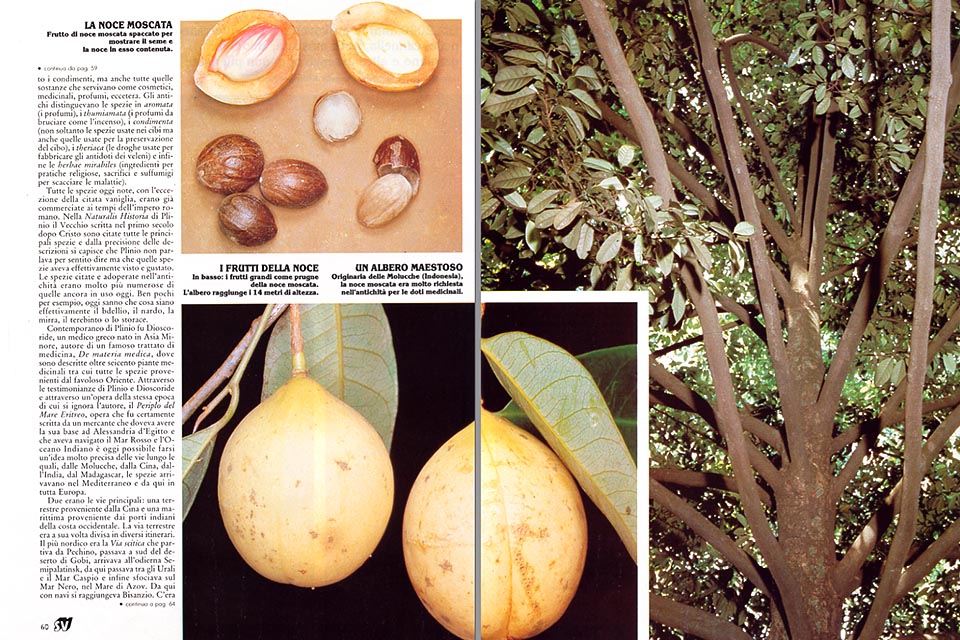 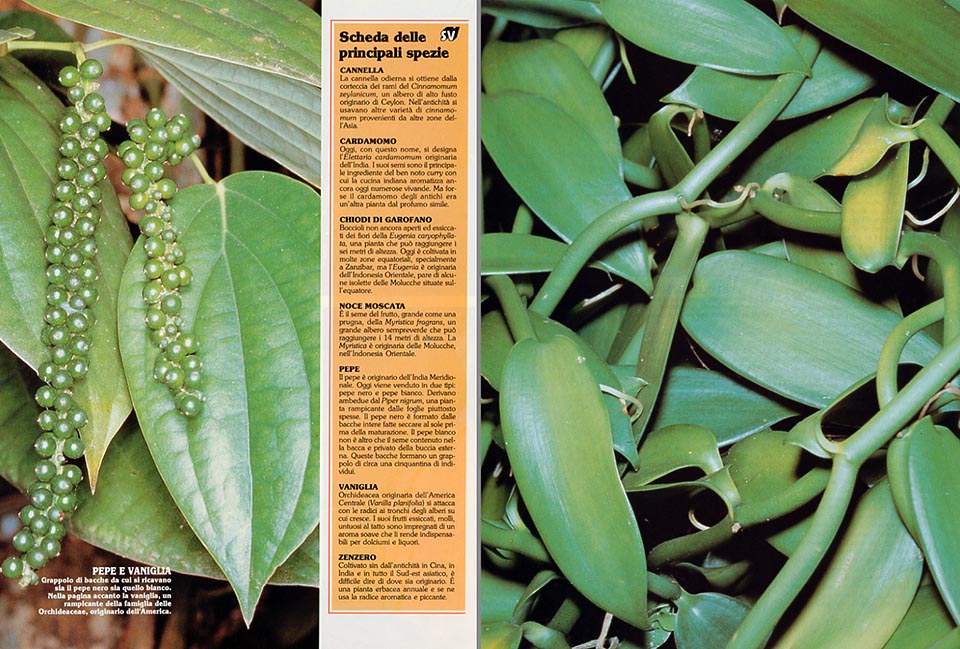 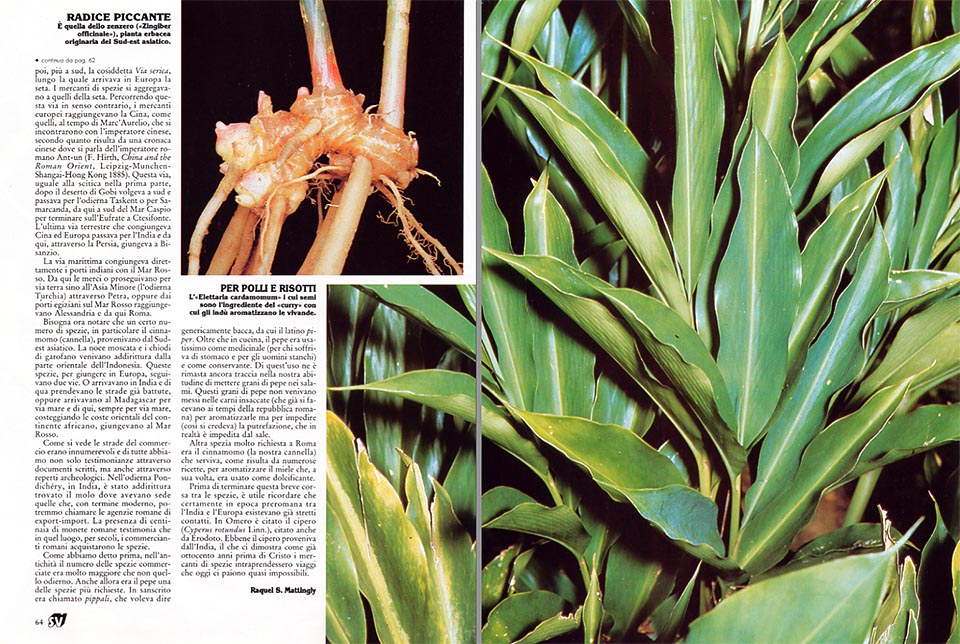 From the times of the Roman Empire till the sixteenth century, the trade of the spices was extremely thriving. It was even one of the causes of the great geographical discoveries of the XV and XVI centuries.

As a matter of fact, Columbus wanted to reach the mythical Indies just for getting spices. And we have to think that later, the only real spice which came from the Americas was the vanilla.

Nowadays, the spices, but the pepper, have a very reduced use and, in any case, they do not have any more the great value they held in the past.

In Diocletian times, as it results from the “Edictum de Maximis pretiis”, some spices were more expensive, at a parity of volume, than the precious metals and the jewels. And they relate that Charles V, great consumer of spices, loving the hot cuisine, gave a big diamond, as a present, to a merchant who had brought him, from Java, a chest of new spices.

We have, however, to keep in mind that in the ancient times, with the name of spices, they were considering not only, as we do now, the condiments, but also all the substances which were
utilized as cosmetics, medicines, perfumes, etc.

The ancients were distinguishing the spices in “aromata” (the perfumes), the “thumiamata” (the perfumes to burn, like the incense), the “condimenta” (not only the spices used in the foods, but also those used for the conservation of same), the “theriaca” (the spices used for fabricating antidotes against the poisons), and, finally, the “erbe mirabiles” (ingredients for religious practices, sacrifices and inhalations for fighting the diseases).

All the spices known today, with the exception of the cited vanilla, were already on the market at the times of the Roman Empire.

In the “Naturalis Historia”, by Pliny the Elder, written during the first century A.C., are cited all the main spices, and from the accuracy of the descriptions, we understand that Pliny was not talking for hearsay, but that he had really seen and appreciated those spices.

The spices quoted and used in the old times, were much more numerous of those still in use today. Very few, for instance, today know what are actually the bdellium, the nard, the myrrh, the terebinth, or the storax.

Contemporary to Pliny, was Pedanius Dioscorides, a Greek physician, born in Asia Minor, author of a famous treatise of medicine, “De materia medica”, where are described more than six hundred medicinal plants, between which, all the spices coming from the legendary Orient.

Through the narrations of Pliny and Pedanius Dioscorides, and a work of the same time, whose author is unknown, the “Periplus of the Erythraean Sea”, work which was by sure written by a merchant who, most probably, was based in Alexandria, and who had been sailing in the Red Sea and the Indian Ocean, it is possible today to get the idea, quite accurate, of the routes along which, from the Moluccas, China, India, Madagascar, the spices were reaching the Mediterranean, and from this one, all Europe.

The main itineraries were two, one, by land, coming from China, and one, by sea, coming from the ports of the western coast of India.

The land itinerary, was, itself, subdivided in various routeing.

The northernmost, was the “Via scitica”, which was leaving from Beijing, passing to the south of the Gobi Desert, arrived, at the present Semipalatinsk, from which it was going between the Ural Mountains, and the Caspian Sea, and at last, was getting on the Black Sea, in the Azov Sea. From here, by vessel, they were reaching Byzantium.

Then, more to the south, there was the so-called “Via serica”, through which the silk was arriving in Europe. The merchants of spices were joining those of the silk. Travelling through this way on the other direction, the European merchants were reaching China, like those, at the time of Marcus Aurelius, who met the Chinese emperor, after what we know from a Chinese chronicle which relates of the Roman emperor Ant-un (F.Hirth, China and the Roman Orient, Leipzig-Munchen-Shanghai-Hong Kong 1885). This way, identical in the first leg to the “scitica”, after the Gobi Desert, was turning to the south and was passing through the present Taskent, or through Samarkand, from here to south of Caspian Sea, for ending on the Euphrates at Ctesiphon.

The last land itinerary, which was connecting China and Europe, was passing through India, and, from here, through Persia, reaching Byzantium.

The sea itinerary, was connecting directly the Indian ports with the Red Sea. From here, the goods, either were continuing the journey via land till Asia Minor (the present Turkey), through Petra, or, from the Egyptian ports in the Red Sea, were arriving at Alexandria, and from here, to Rome.

We have now to note that a certain number of spices, particularly the cinnamon, were coming from the south-east of Asia. The nutmeg and the cloves were coming even from the eastern part of Indonesia. These spices, for reaching Europe, were following two itineraries. Either, they reached India and from here they were travelling along already beaten tracks, or, they were getting in Madagascar by sea and from here, always by sea, sailing along the cost of East Africa, were arriving in the Red Sea.

As we can see, the ways of the trade were countless and of all we have not only relations through written papers, but also through archaelogical finds.

In the modern Pondichery, India, they have even found the wharf where were located those which, with a modern wording, we might call the Roman export-import agencies. The presence of hundreds of Roman coins witnesses that in that place, for centuries, the Roman dealers did purchase spices.

As we have told before, in the ancient times, the number of the spices dealt with, was much bigger than in the modern ones. Also, by that time, the pepper was one of the most required spices. In Sanskrit, it was called “pippali”, which, was meaning, generically, berry, from which the Latin “piper”, Besides the utilization in cuisine, the pepper was very much used as a medicine (for those suffering from stomach ailments and for the tired people), and as a preserver. Of this utilization, a trace has still remained, in our habit of placing grains of pepper in the cold cuts. These grains were placed in the sausages (which were already done in the times of the Roman Republic), to aromatize them and to prevent (this is what they were thinking), the putrefaction, which, as a matter of fact, is prevented by the salt.

Another much requested spice in Rome, was the cinnamon, which was used, as it results from several recipes, for aromatizing the honey, which, at its turn, was used as a sweetener.

Before ending this short excursus between the spices, it is good to remind that, by sure, in pre-Romanic times, did exist close contacts between India and Europe. The sedge (Cyperus rutundus Linn.), is quoted by Homer, and also by Herodotus in their works. Well, the sedge coming from India, which thing proves that even eight hundred years B.C., the spice merchants were leaving for journeys which nowadays look almost impossible to our eyes.

INFORMATIONS ABOUT THE MAIN SPICES

The modern cinnamon is obtained from the bark of the branches of Cinnamomum zeylanicum, a tall tree native to Ceylon. In the old times they used other varieties of Cinnamomum, coming from other Asiatic locations.

Nowadays, with this name, we designate the Elettaria cardamomum, native to India. Its seeds are the most important ingredient to the well known curry with which the Indian cuisine aromatizes, still now, several dishes. But, maybe, the cardamom of the ancients was another plant, with a resembling perfume.

Buds not yet open and dried up, of the flowers of the Eugenia caryophyllata, a plant which reaches the 20 m of height. Nowadays, it is cultivated in many equatorial regions, especially in Zanzibar, but the Eugenia is native to the East Indonesia, it seems to some small Moluccas islands, located at the Equator.

Cultivated since the old times in China, India, and all the South-East Asia, it is difficult to say where is native to. It’s an annual, herbaceous, plant, and its aromatic and pungent root is the part which is utilized.

It is the seed of the fruit, as large as a plum, of the Myristica fragrans, a tall evergreen tree, which can reach the 14 metres of height. It is native to the Moluccas islands, in Eastern Indonesia.

Native to South India. It is sold now in two types: black and white. Both are coming from the Piper nigrum, a climbing plant with rather thick leaves. The black pepper is formed by the berries whole, dried in the sun, before the ripening. The white one is nothing else than the seed contained in the berry and peeled of the outer skin. These berries form a cluster of about fifty specimen.

Orchidacea native to Central America (Vanilla planifolia), sticks with its roots to the trunks of the trees on which it is growing. Its fruits, dried up, soft, unctuous to the touch, are impregnated of a sweet aroma, which renders them indispensable for sweets and liqueurs.

Grown since ancient times in China, India and all Southeast Asia, it’s difficult to ascertain where did it originate. Zingiber officinale is an annual, herbaceous plant whose fragrant, spicy root is used for diverse purposes.

From the far east to Rome the route of spices was last modified: May 25th, 2019 by Giuseppe Mazza