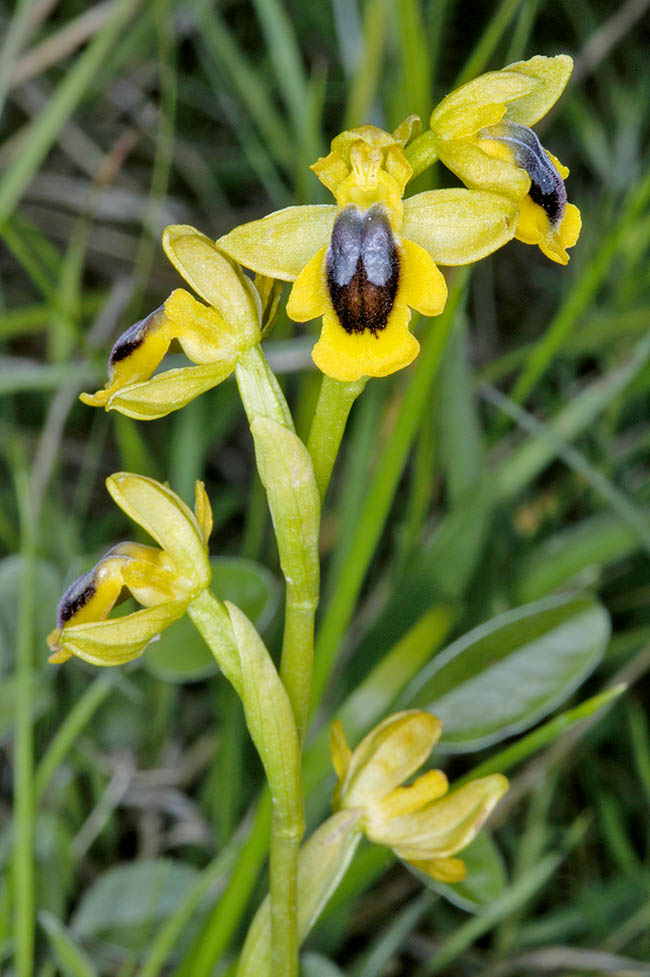 Ophrys lutea Cav. is an orchid amply diffused in the Mediterranean area, in fact its range covers a vast area of southern Europe, North Africa and Middle East, including Portugal and Turkey.

In Italy its presence has been reported in Liguria, Campania, Basilicata, Puglia, Calabria, Sicily and Sardinia.

The species has been described in 1793 by the Spanish botanist Antonio José Cavanilles and the specific epithet lutea comes from the Latin “luteus” = yellow, with reference to the main colour of the labellum.

Ophrys is the name of the genus described by Linnaeus in 1753 conversely comes from the old Greek “ὀφρύς” (ophrýs), eyebrow, with reference to the presence of a certain hairiness on the labellum.

Previously, Gouan in 1764 had instead described this entity as a simple variety of Ophrys insectifera.

Curiously, inside a genus subject to continuous nomenclatural revisions such as Ophrys, it is the only species together with O. scolopax, among those described by Cavanilles, of having maintained its own binomen until today.

Though the species does not present a great morphological variability if compared with other taxa of the genus, some Authors recognize numerous subspecies inside O. lutea with a more circumscribed geographical distribution, such as subsp. corsica in France, subsp. laurensis in Sicily, subsp. quarteirae in Algarve, etc.

From the ecological point of view this is a plant diffused from the sea level up to 1500 m of altitude, with preference to open spaces, such as pastures, wood clearings, arid meadows and garrigues, in full sun or in half shade.

It is a bulbous geophyte, that is a perennial plant provided with an underground organ (bulb) through which it spends the summer season, adverse due to the absence of precipitation. Conversely, its biological cycle completes within a few months between winter and spring, with the appearance of the leaves and the blooming (usually between March and May).

The plant during the period of its maximum development is 5-40 cm tall and presents ovate-lanceolate, obtuse, basal leaves, whilst the cauline leaves are acuminate and wrap an erect and at times flexuous stem.

The inflorescence is loose with few flowers (2-3) relatively big (15-24 mm). The three sepals are green-yellowish and have a rounded apex, the median folded over the gynostemium and the lateral ones bent forward. The two superior petals are shorter, oblong and facing forward with truncated apex. The labellum is slightly trilobed (the central lobe is in turn bilobed), up to 18 mm long and up to 15 mm broad, yellow at the margin and of dark brown colour at the centre with a bilunulate macula of grey-bluish colour forming a characteristic inverted V. 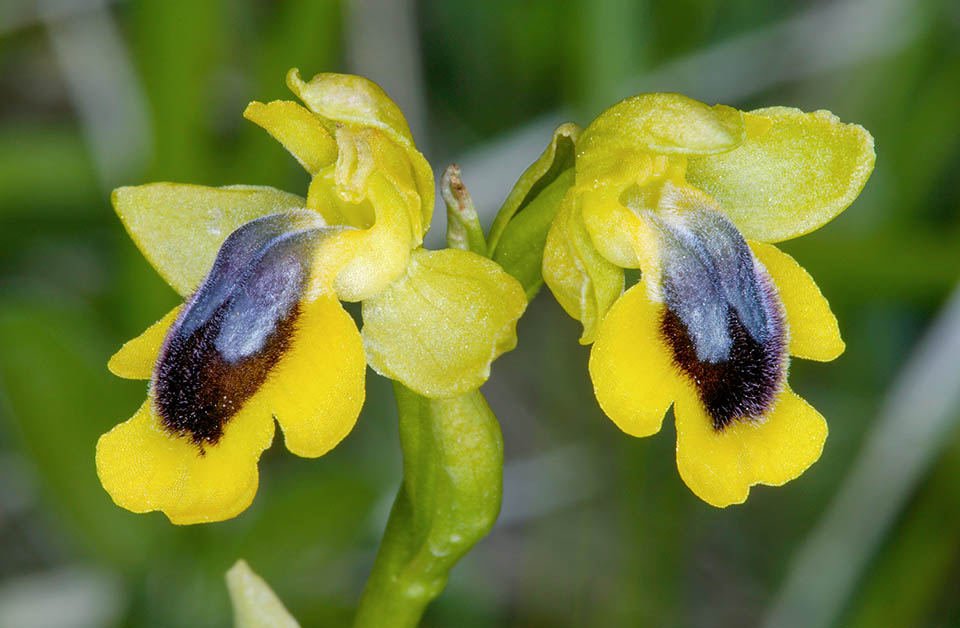 Usually blooms between March and May, from the sea level up to 1500 m of altitude. Like other Ophrys attracts pollinators simulating the females © Giuseppe Mazza

The reproductive organs, that is, stamens and pistil are fused in the gynostemium, forming an acute angle with the labellum.

Like other species of the genus Ophrys, also in this case the morphology of the labellum mimes the shape and the colours of the females, attracting and deceiving the males, causing them to perform a pseudo-copulation that allows the pollination.

In particular, this occurs through the work of some species of bees belonging to the genus Andrena (Andrenidae), among which A. cinerea, A. senecionis and A. nigroolivacea. The fruit is a small capsule containing quite numerous small seeds, whose germination is linked to the presence of symbiont fungi having hyphae that infect the seeds that, otherwise, due to the scarce reserve substances present would not be able to carry the seedling to development.