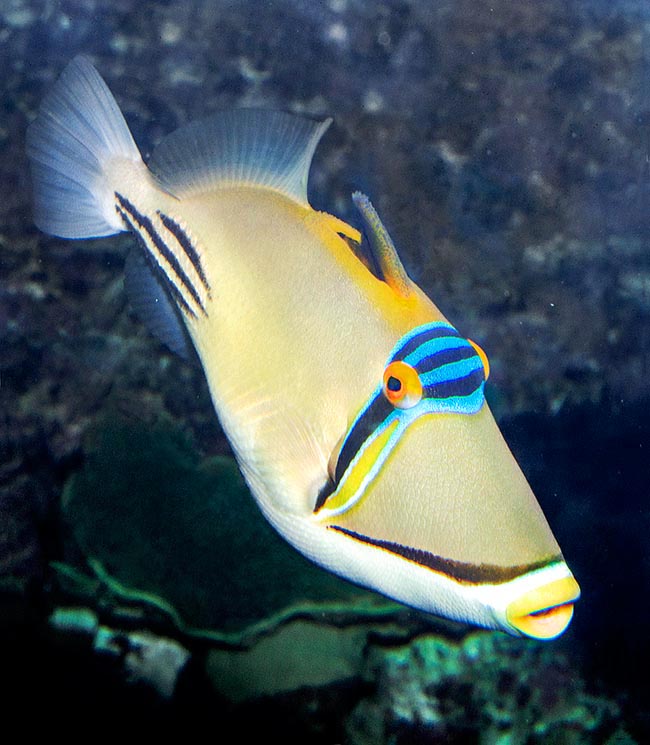 The Arabian Picasso triggerfish (Rhinecanthus assasi), strictly localized in West Indian Ocean, is present only in the Red Sea, Gulf of Aden and all Somali coast, Soqotra Island, the Persian Gulf and the Gulf of Oman © Giuseppe Mazza

The  Rhinecanthus assasi (Forsskål, 1775),  known as Arabian Picasso triggerfish, to distinguish it from the analogous  Rhinecanthus aculeatus  called Picasso triggerfish, belongs to the class of the  Actinopterygii, the ray-finned fishes, and to the family of the  Balistidae,  the so-called triggerfishes, inserted in the manifold order of the  Tetraodontiformes,  the same as the Pufferfishes and the Boxfishes, species with scales often transformed in carapaces bristling with spines and with four characteristic dental plates that form a sort of beak for breaking carapaces and shells or for crumbling madrepores. Small sized species such as the Canthigaster jactator  not exceeding the 9 cm or giant ones, like the Sunfish  (Mola mola)   that, with more than 3 m of length is the biggest extant bonyfish.

The name of the genus Rhinecanthus comes from the Greek  “ῥιvός” (rhinos)  = nose, and from “ἄκανθα” (akantha) = spine, with reference to its snout, quite elongated for a triggerfish, and to the characteristic dorsal spine, also typical of the triggerfishes. The specific name assasi comes, Latinized, from the Arabic name “Azzazi”, locally given to the species.

The Arabian Picasso triggerfish, strictly localized in the western Indian Ocean, is present only in the Red Sea, in the Gulf of Aden, with all Somali coast, the island of Soqotra, the Persian Gulf and the Gulf of Oman.

Usually it goes swimming in shallow waters, rarely under the 10 m of depth, among madreporic formations or on sandy bottoms among the rubbles of the reefs, sites providing safe dens where to spend the night and to shelter in case of danger.

The young, initially, do live in school along the beaches, then, often, grow sheltered by madrepores belonging to the genera Acropora, Pocillopora or Stylophora and it is not rare to find them hidden in the big empty shells that lay on the bottom.

The Rhinecanthus assasi can reach the 30 cm.The body is flat and the head, massive, occupies about one third of the whole length, with the eyes placed at the top, far from the spines of the sea urchins of which they are greedy. They move independently, like those of the chameleons, for an ample and perfect vision of the surrounding environment. The lips are fleshy with 2 solid teeth per jaw, as typical of the Tetraodontiformes, to which add, in the upper one, six pharyngeal flat teeth having a grinding function.

The back has the characteristic erectile trigger, formed by three spines the fish may block vertically in defense. The first, solid and edgy like a rapier, is clear, emphasized by the black colour of the fin, and keeps in position even when the animal has passed away. It serves to discourage the aggressors that associate the characteristic garish livery and the spine with painful sores to the stomach. 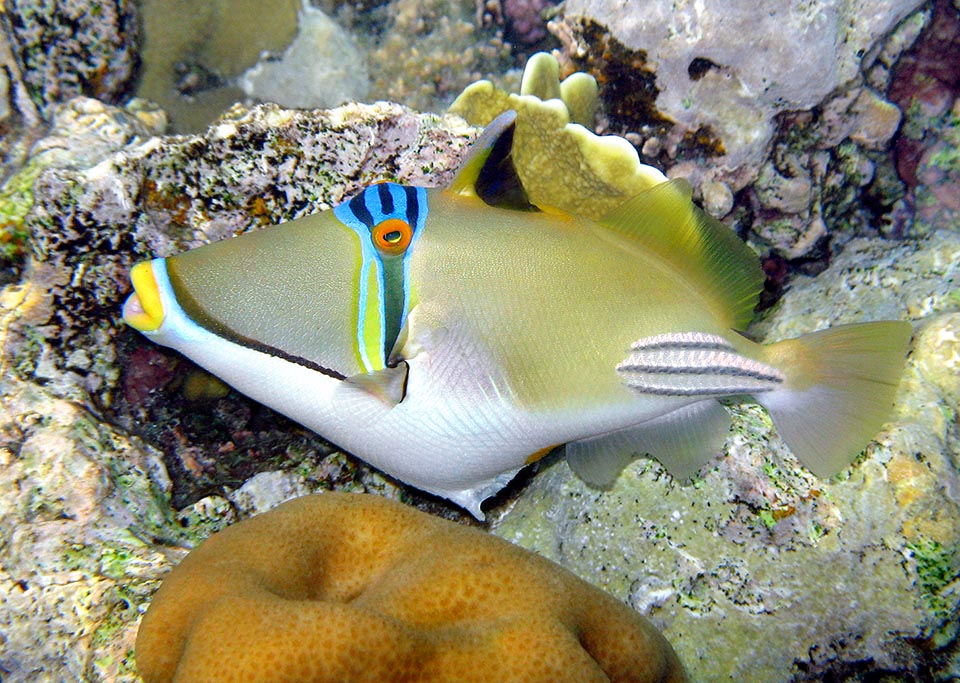 It can raise the fearful dorsal spine, blocked vertically even when it is dead, increase the size spreading the belly and emitting sounds to confuse the predators © G. Rusconi

The lips are yellow and the “V” in Picasso’s style, black trait, that start from the base of the pectoral fins towards the snout and the eyes, like a Rhinecanthus aculeatus and Rhinecanthus verrucosus, here is decidedly more marked. An elegant black paintbrush stroke that, passing over the head, divides in three marked bands, like a logo, with blue border and red-orange eyes.

The Rhinecanthus assasi practically nourishes of all what it finds on the bottoms: echinoderms, crabs, small shrimps, sea squirts, annelids and eggs of other fishes. It pierces without any difficulty the shells of the bivalves and of the gastropods, crumbling like nothing the branches of the madrepores while looking for tasty polyps. It attacks the small fishes and does not disdain dying fishes, carcasses, algae, foraminifers and debris. 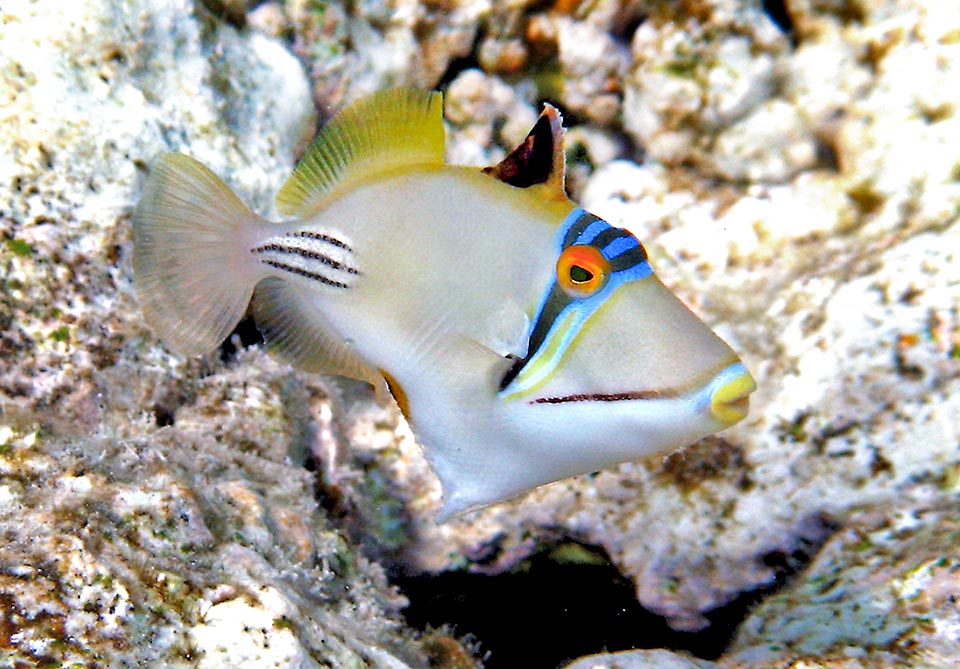 Gritty young. The kids live in schools first, then alone, hiding among the madreporic crevices, at times at home even in empty shells © Gianemilio Rusconi

For finding the small worms, it moves the sand with jets of water and to render harmless the sea urchins it seizes them and then throws them several times on the rocks.

With such a diet it is clear that it has all the credentials for the aquarium life, even if, seen the size, it is suitable only for the large pools of the public aquaria, especially as it is territorial and, apart problems of incompatibility with its consimilars, will devour crustaceans, corals and small fishes.

During the night, in nature, it chooses dens with a narrow entrance, where it is possible to enter only with the trigger downto then arm it and sleep peacefully, sure of not being carried out by the currents. When feeling in danger, it can emit sounds: grunts and cracks, obatined by gritting and chattering the teeth, or by vibrating the swim bladder. This serves for surprising the importunate and for finding the time for escaping.

Usually, it lives alone and there are no precise data about the reproduction, but it seems that the eggs are laid, as for analogous species, in a nest dug in the sand and guarded until hatching.