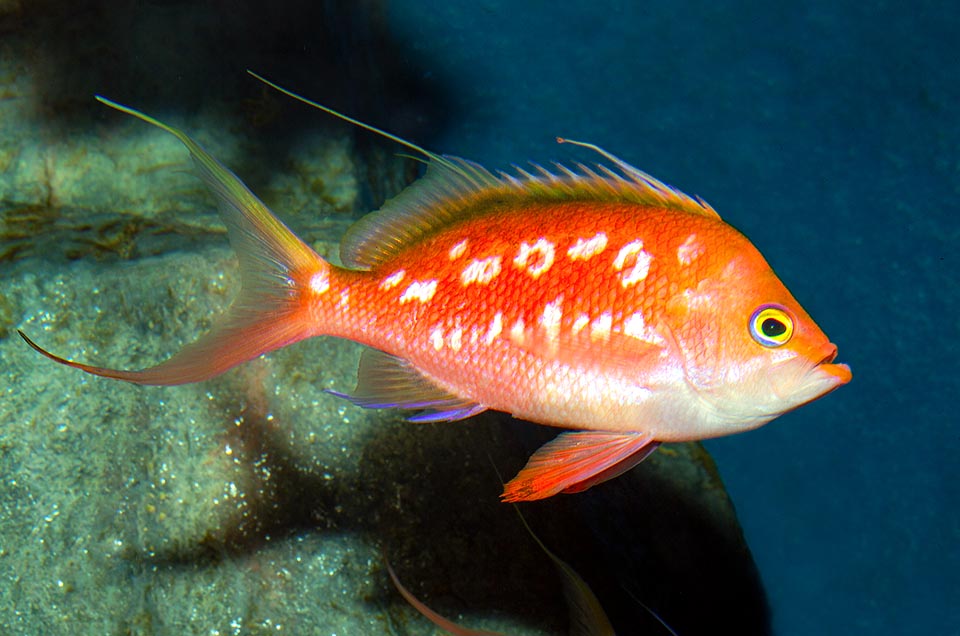 As the Japanese name suggests, the Sacura margaritacea males have a cherry colour with pearly spots on the sides recalled by the scientific name © Giuseppe Mazza

The  Sacura margaritacea (Hilgendorf, 1879)  belongs to the class of the  Actinopterygii, the ray-finned fishes, to the order of the   Perciformes and to the family of the  Serranidae, rich of 75 genera and of more than 550 species grouped in 3 subfamilies: the  Serraninae like the  Serranus scriba, the  Epinephelinae like  Epinephelus marginatus  and many other species, often of big size like the Atlantic goliath grouper  (Epinephelus itajara), that may reach even 3 m of length with a weight of about 400 kg, and, finally, the  Anthiinae to which belongs the Swallowtail seaperch  (Anthias anthias) common in the Mediterranean and quite similar to the species of the Japanese area.

The genus Sacura comes from the Japanese name “Sakura”, meaning cherry, with reference to the colour, whilst the specific term margaritacea comes, Latinized, from the Greek “μαργαρίτης” (margarítes) = pearl, because of the elegant early spots on the sides of the males. 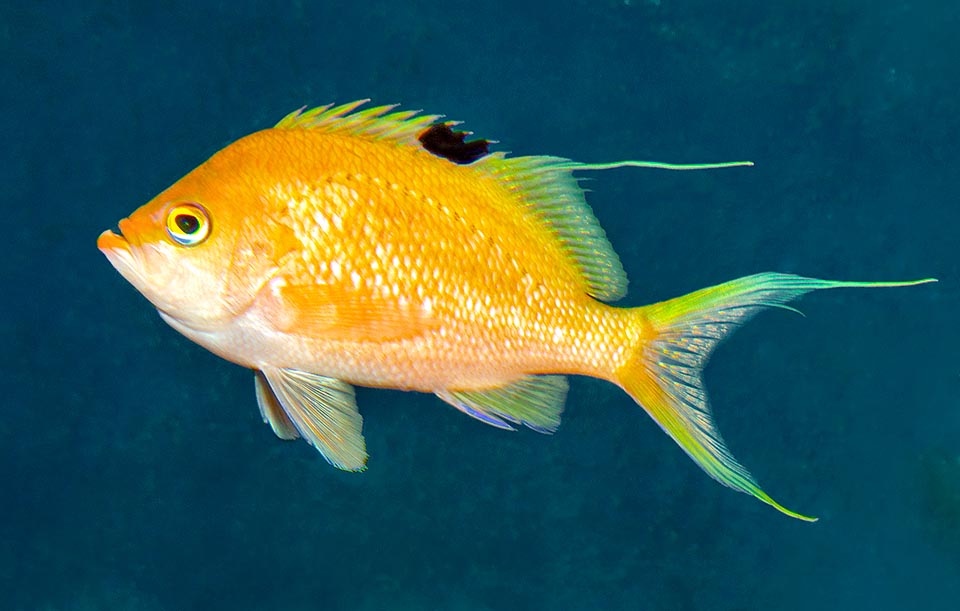 Conversely, the females are yellow-orange with a showy black spot on the last 4 spiny rays of the dorsal fin © Giuseppe Mazza

The Sacura margaritacea covers a relatively modest area. We find it in Japan, in the Ogasawara Islands, South Korea, China, Taiwan and then, much more to the south, in New Caledonia.

It is a temperate waters fish, included between 16,8 and 27,8 °C, that lives mainly in rocky environments at 15-50 m of depth, with temperatures around the 20 °C, where the gorgonians live among the rapid oceanic currents, rich of plankton. 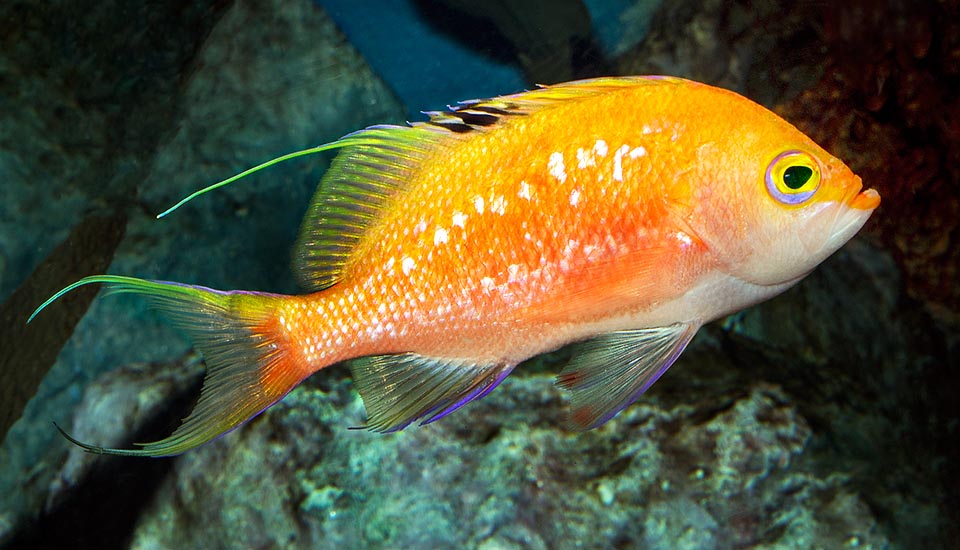 Growing, they can transform in males. This female is in transition phase, the black spot regresses and livery tends to red with the typical pearly pattern © Giuseppe Mazza

The oval body, moderately compressed, is taller than the length of the head, and reaches 13 cm. The mouth is big, with the lower jaw slightly longer, as normal in the Serranidae, the preoperculum and like for the Anthias anthias, the operculum have spiny protuberances and are present tiny teeth even in the vomer.

In all species of the genus Sacura, the dorsal fin has 10 spiny rays, with the third one elongated especially in the males then, as in our case, follow 16-18 (usually 17) soft rays and 7 rays unarmed. The pectoral ones, with 16-18 rays, and the pelvic are equally unarmed. The caudal is forked, particularly long on the sides. 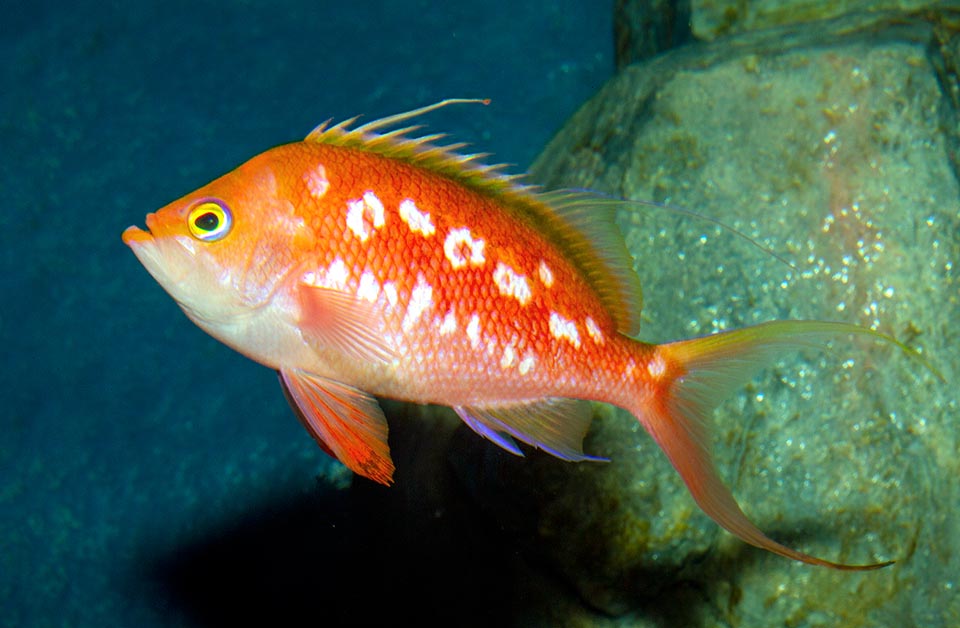 The Sacura margaritacea is found in very numerous schools with hundreds of specimens and several males. Clearly, their social structure is quite different from that of the Anthias anthias that moves in small groups formed by one dominant male and a ten of females, at most. 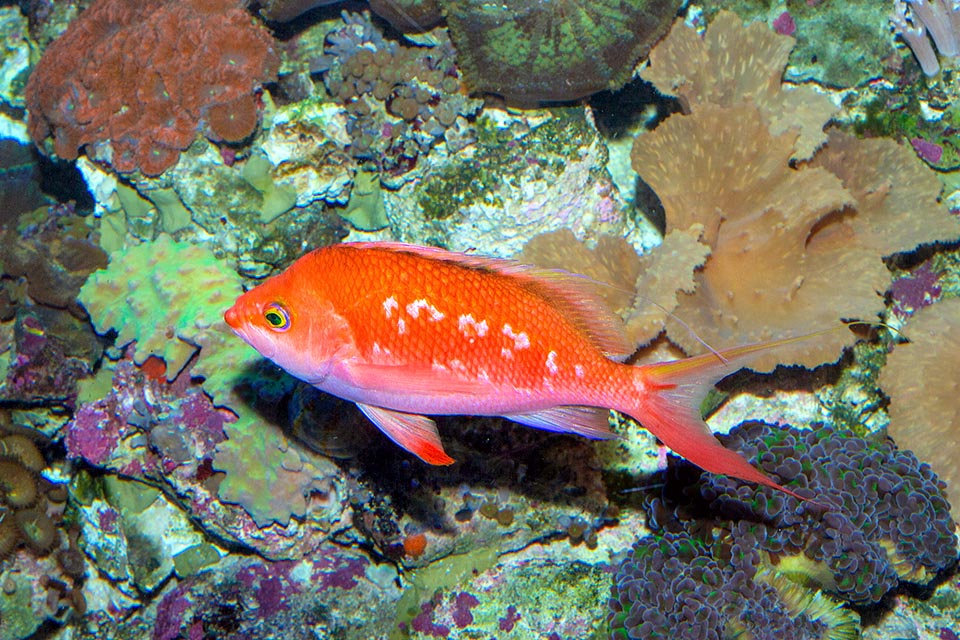 It lives nourishing of zooplankton and small invertebrates in 15-50 m of depth, where gorgonians grow among rapid oceanic currents © Giuseppe Mazza

The Sacura margaritacea nourishes of zooplankton and of other small invertebrates but little is known about its reproductive modalities.

In the large pools of the public aquaria it’s a fish that may exceed the 10 years, but even if often it is shamelessly offered at crazy prices, it is not suitable for the domestic aquaria due to the difficult feeding and the necessity of refrigerating the water at least in the warm months of the year.

The resilience of the species is presently (2020) quite good, with possible doubling of the populations in less than 15 months, and the vulnerability index is decidedly low, marking just 23 on a scale of 100.