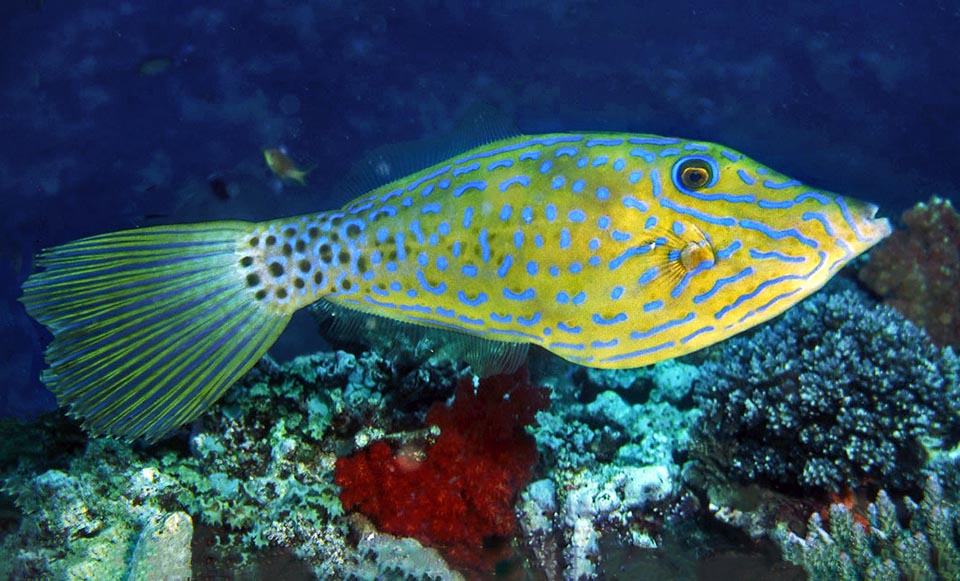 Rare but present in all oceans warm waters, Aluterus scriptus is unmistakable due to its livery drawings similar to writings and the very big tail shaped like a broom © Paddy Ryan

Commonly known as Scrawled filefish, Aluterus scriptus (Osbeck, 1765), belongs to the class of the  Actinopterygii, the ray-finned fishes, to the order of the  Tetraodontiformes and to the family of the  Monacanthidae, that counts 28 genera and more than one hundred species.

They are the so-called filefishes, because of the scabrosity of their skin, covered by bony plaquettes having minute and spaced spinulae, once used to smooth the artifacts. 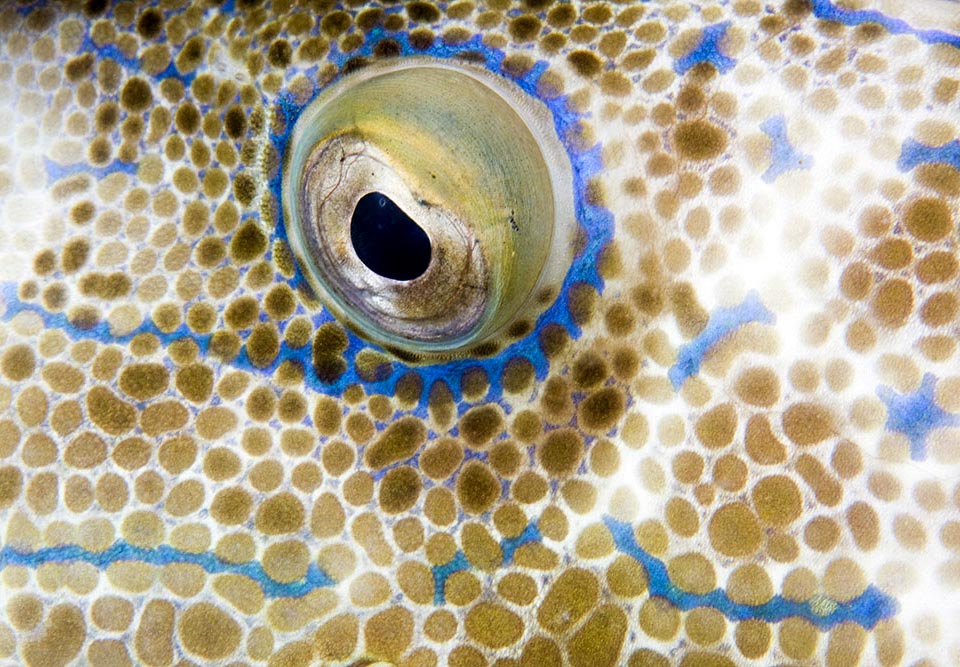 Detail of the eye and of the colourful scaleless skin, covered by bony plaquettes with minute spinulae typical to the filefishes, once used for polishing artifacts © Paddy Ryan

The name of the genus Aluterus, leather, purse in Latin, in fact refers to this unusual skin, whilst the specific epithet scriptus, always in Latin, reminds us that the livery is characterized by small spots and script-like hatches.

The vulgar names in the various languages evoke this and other interesting morphological features. In English, it is also called broomtail filefish, scribbled leatherjacket, that is, doodled Limefish, filefish shaped like a broom, scribbled leather jacket. 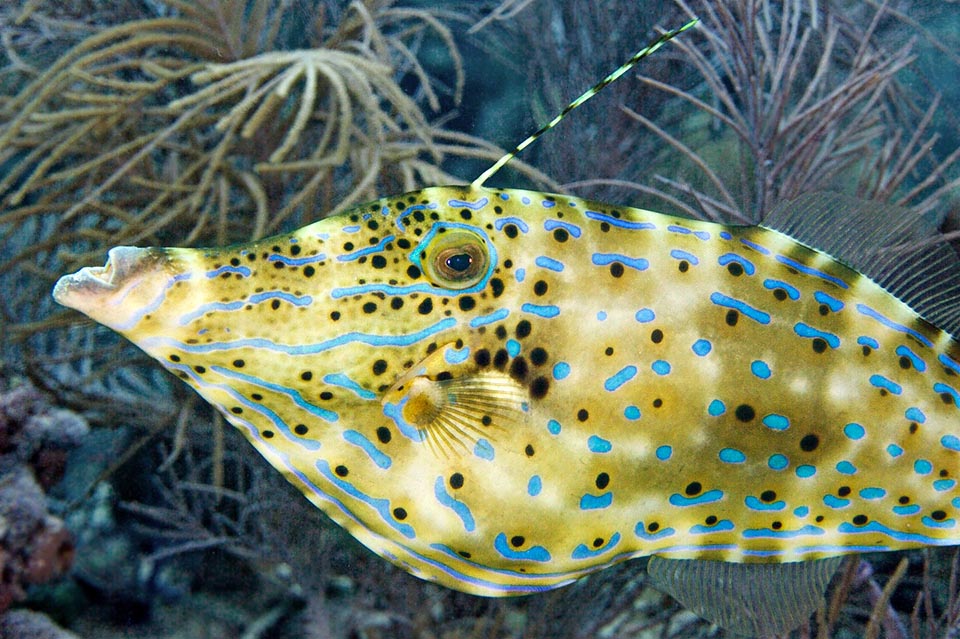 Like in triggerfishes, the first dorsal fin has one spiny ray that can be blocked vertically to hurt, like a stylus, the stomach of the predators © Allison & Carlos Estape

In German, Großer Feilenfisch, Schrift-Feilenfisch, highlights that its is a big fish with some scribbles; whilst in Spanish, with

The French names Poisson-lime gribouillé, bourse graffiti, bourse robe de cuir, baliste écriture, bourse loulou, chien katounou, alluding further to the shape of a purse, to the tail similar to a broom, and, with a scientific hint to its relationship with the triggerfishes, assigned to the same order and belonging to the family of the Balistidae. 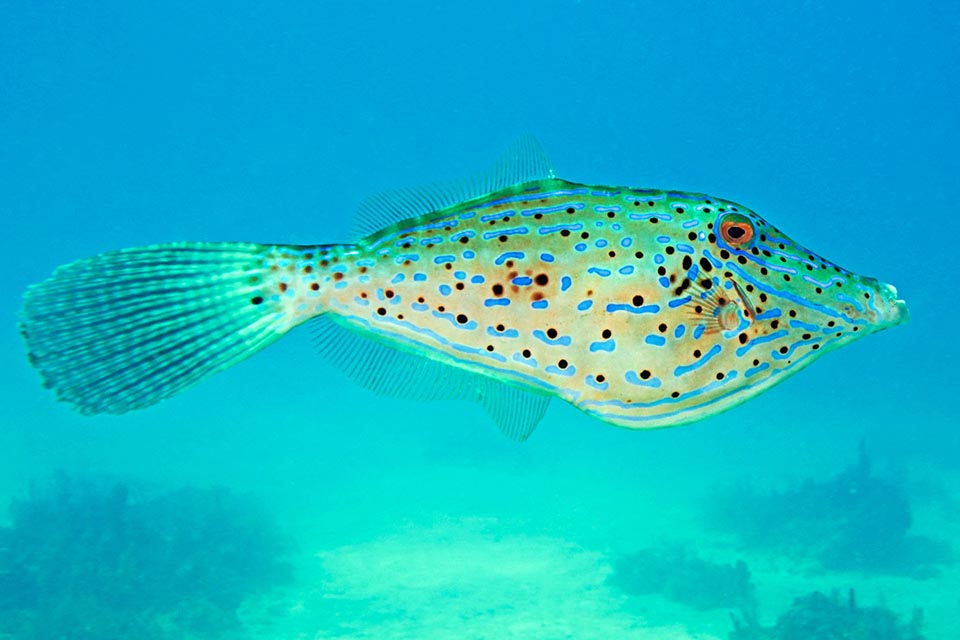 Scrawled filefish can be 110 cm long and weigh 2,5 kg, even if its normal size is about 60 cm. Omnivorous, it nourishes of algae, small crustaceans, tunicates, hydrozoans, sponges, sea anemones and coral polyps. Depending from what he eats, its flesh may cause severe food poisonings known as ciguatera © Allison & Carlos Estape

The Scrawled filefish is relatively rare but present, with a very vast diffusion, in the tropical and subtropical waters of all oceans, Red Sea included.

Semi-pelagic, it usually goes swimming on the outer side of the reefs at 3 to 2 m of depth, but has been found even at 120 m. 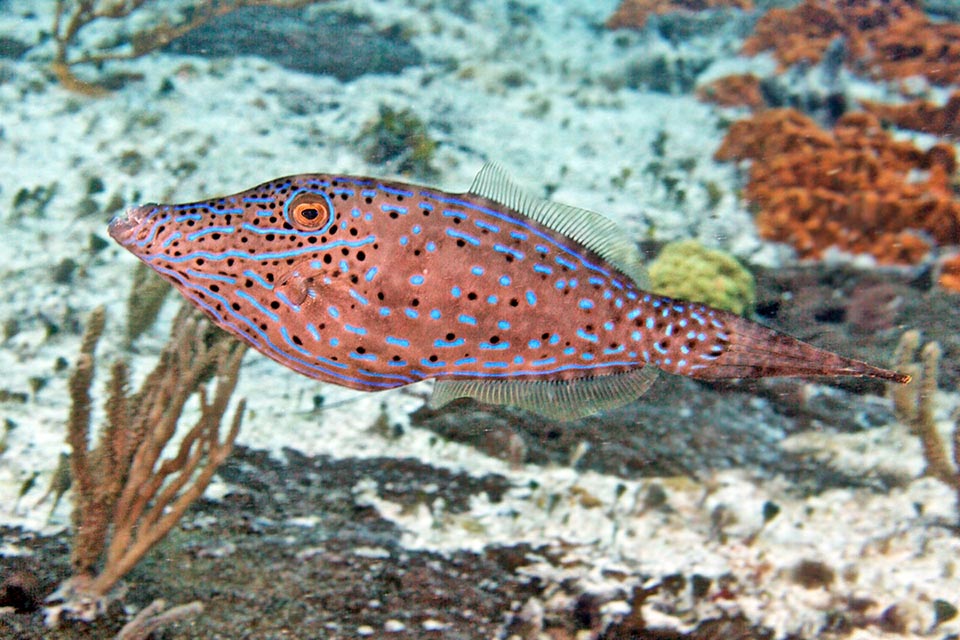 Background colour may change instantly. Only the typical blue traits and the spots remain unchanged. The caudal fin can be closed like a fan © Allison & Carlos Estape

It frequents steep rock walls, rich in madreporic and rocky ravines, where it is easy to camouflage or to find a hiding place.

Aluterus scriptus is the largest filefish and can reach the length of 110 cm and the weight of 2,5 kg, even if its common size is around 60 cm. The body is strongly compressed, elongated, with pointed snout and small mouth bent upwards and concave with the protruding lower lip and teeth, similar to incisors, relatively solid and pointed: 6 above and 6 or, at times, even less, below. 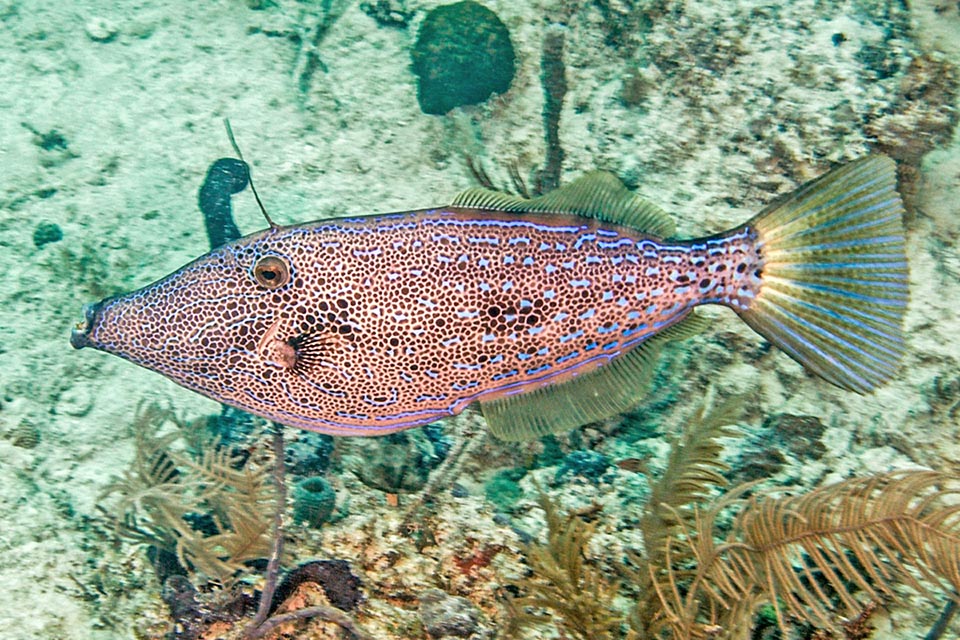 This specimen, defensive, has raised the stylus, stretched the tail, that is the only motor for escaping, and has taken on a particularly mimetic livery. The teeth are visible, like incisors, fairly solid and pointed on the protruding lower jaw. They have 6 of them on upper one, and as many or little less on the lower one © Allison & Carlos Estape

Like the triggerfishes (i.e. the Pseudobalistes fuscus) thanks to an interlocking mechanism, the first dorsal fin can be blocked vertically by the second, smaller, here at times almost invisible.

If raised, this thin mobile stylus remains armed even when the fish dies, and therefore serves to discourage the predators that associate over time the memory of annoying ulcers to its unmistakable livery. In fact, nature, more than to the individual, always looks to the survival of the species. 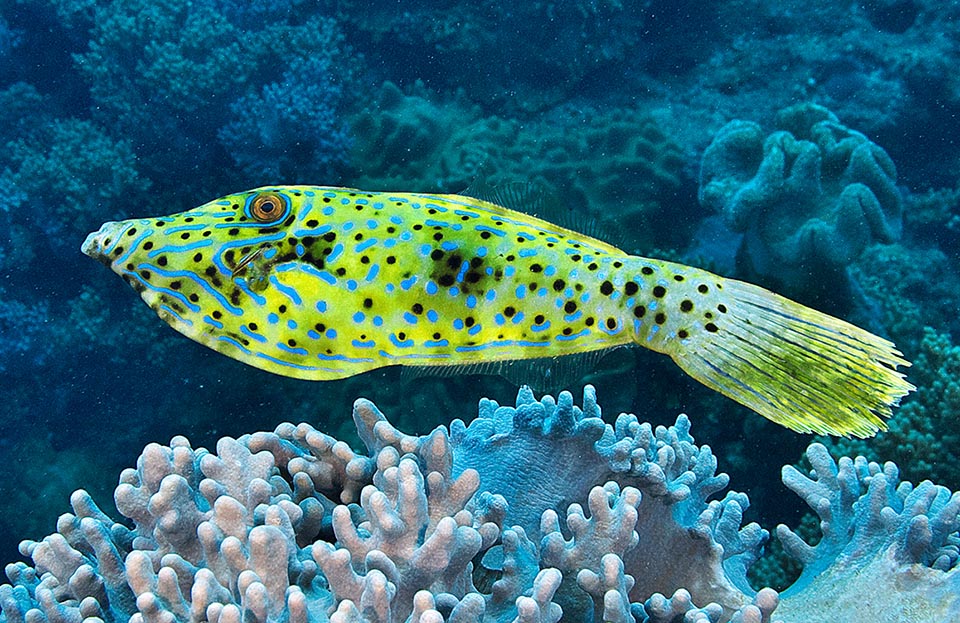 Again, another livery. It is not so much surprising its mimicry but how quickly it can change the background colour © Keoki Stender

Moreover, when the Scrawled filefish spends the night in a den having a narrow and low entrance, where it can enter only with spine bent, then it can raise it and sleep undisturbed, sure that it will not be carried off by the currents while sleeping.

Due to its size, Aluterus scriptus does not need to appear bigger to impress the intruders, and so, unlike the Picasso triggerfish (Rhinecanthus aculeatus) or other filefishes such as Pervagor aspricaudus, Pervagor janthinosoma or Acreichthys tomentosus, cannot extend the abdomen downwards. 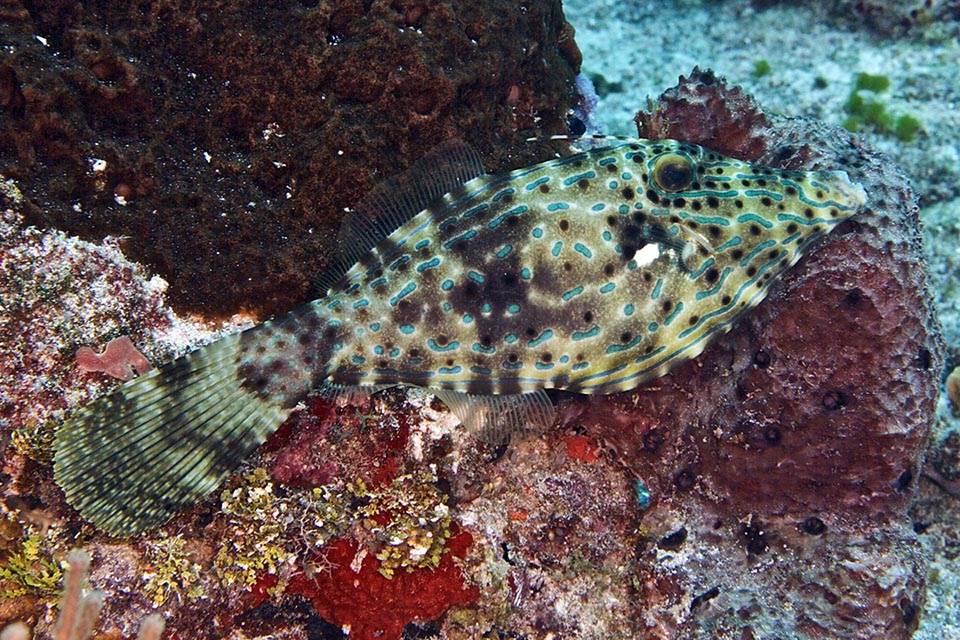 At night it wears a mimetic pyjamas with pale and dark vertical bands overlapping the usual drawings. This, resting on the bottom, maybe has already sketched it © Allison & Carlos Estape

The gill opening is oblique and little visible, being disguised by the drawings. 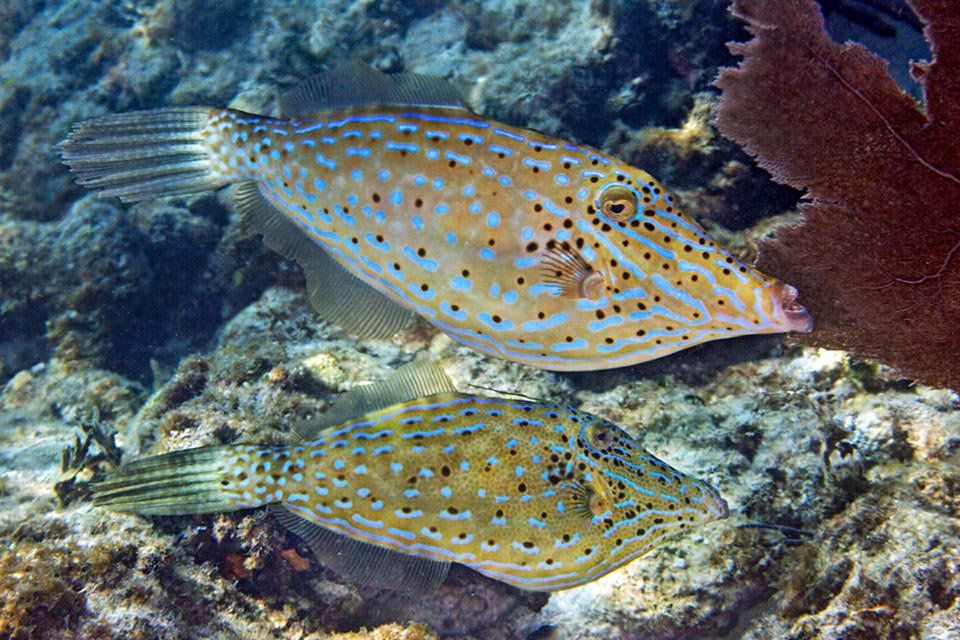 There is no sexual dimorphism. The background colour of the livery is extremely changeable depending on the mood and the environment. Olive brown or grey, more or less pale, stands out on fanciful lines made of blue lines and spots, to which add some black small spots.

What is astonishing is the capacity of changing quickly, like an Octopus (Octopus vulgaris), the background colour, and can compete in fantasy with the not less changeable Aulostomus chinensis.  During the night the Scrawled filefish also wears camouflaged pyjamas with pale and dark bands, that add to the spots and the blue drawings. 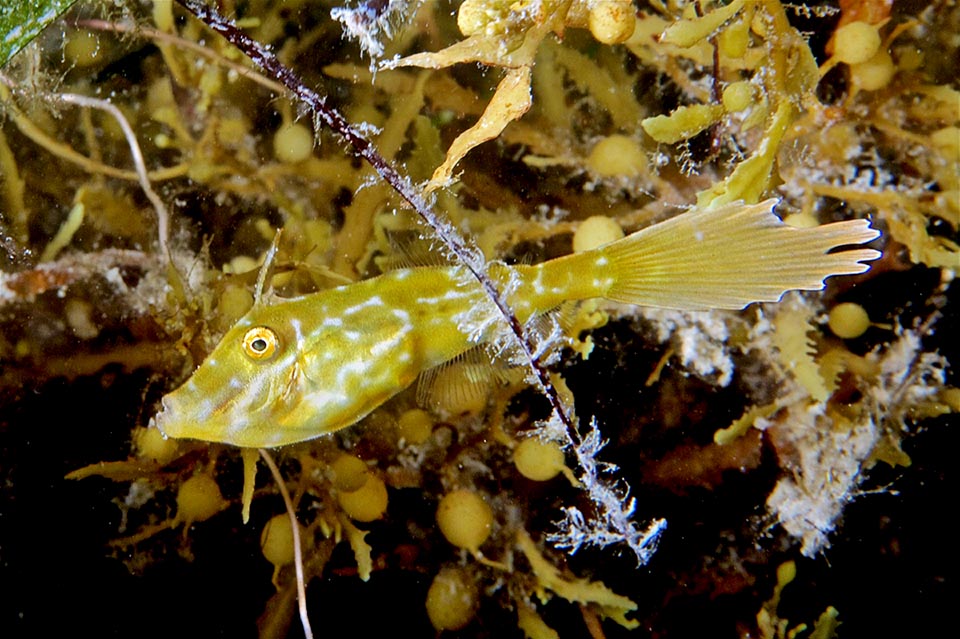 Eggs are mostly fecundated in nests dug on the bottom, surveyed by the female at times helped by the male. The pelagic larvae grow up, nourishing of plankton, sheltered by floating wrecks, mainly algae like the sargassos carried by the currents. The juveniles, similar to adults, are yellow and while growing assume a black dotting © Allison & Carlos Estape

Aluterus scriptus is omnivorous. It nourishes of algae and practically all benthic invertebrates: small crustaceans, tunicates, hydrozoans, sponges, sea anemones and coral polyps. Shy, peaceful and solitary, is unable to escape in front of divers, who take advantage of this for getting memorable photos. 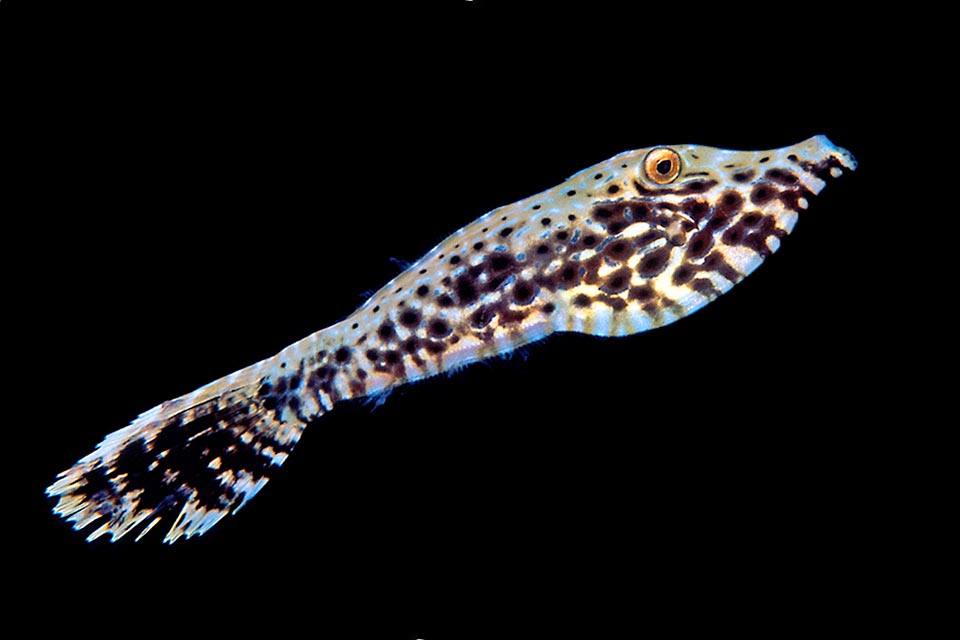 An about 7 cm long young. The blue drawings typical to the species begin to glimpse a little at a time © Keoki Stender

During the reproductive period it is found in couples or in small schools formed by one male and 2-5 females. When they are ready to hatch, these ones dig small nests on the bottom and watch over the fecundated eggs, driving away, at times helped by the male, the wandering ill-intentioned.

It seems that in the subtropical waters the fecundation takes place even offshore. When 5 mm, the pelagic larvae manage to display already the adult look. 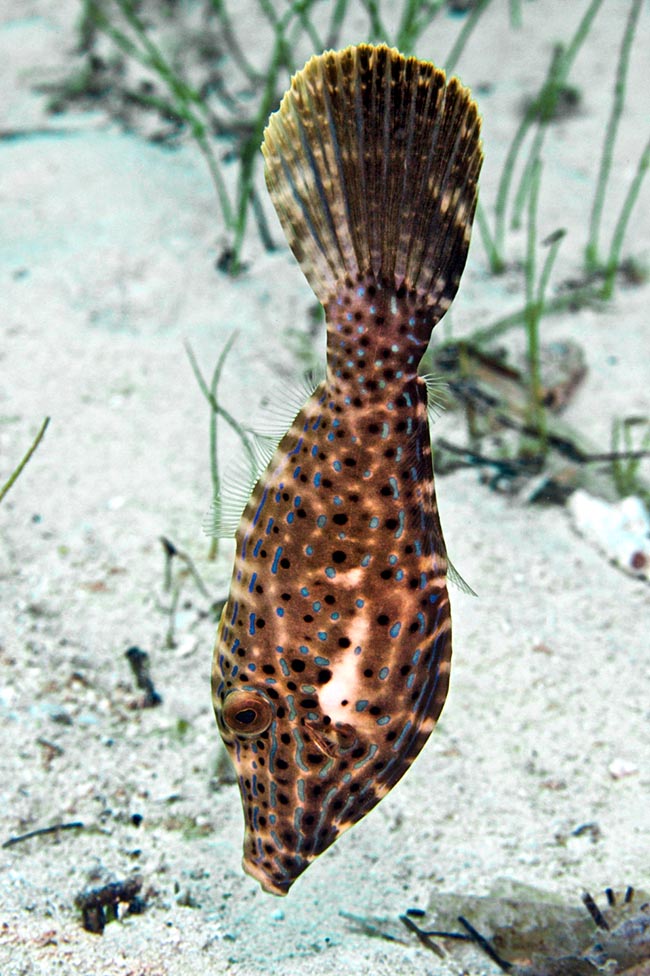 A bigger specimen. The juveniles that have reached the bottoms often move in vertical position, head down, to merge with the fragments of vegetation carried adrift by the wave movement © Allison & Carlos Estape

The young grow up for months sheltered by floating wrecks, mostly algae, such as the sargassoes transported by the currents. They are yellow with a black dotting. Later, when about 7 cm long, the yellow colour disappears and the black colour takes over while the typical blue drawings take form.

In order not to be too conspicuous, the young that have reached the bottoms often move in vertical position, head down, to get confused with the fragments of vegetation dragged adrift by the wave movement.

The Atlantic bluefins (Thunnus thynnus) and the Mahi-mahi (Coryphaena hippurus) are the natural predators of Aluterus scriptus, fished in Australia and in Japan also for the flesh, though in certain areas, depending on what it finds on the bottoms, it can generate serious food poisonings known as ciguatera.

Because of its unusual appearance and the slow swimming, the Scrawled filefish is sometimes present in the large public aquaria, the only ones that can furnish it pools of adequate size, not to forget the difficult feeding and the quality of the water.

The resilience of the species is mediocre, seen as necessary 1,4-4,4 years for doubling the populations decimated by the events, but nowadays (2021) the vulnerability is already high, marking a 68 on a scale of 100.