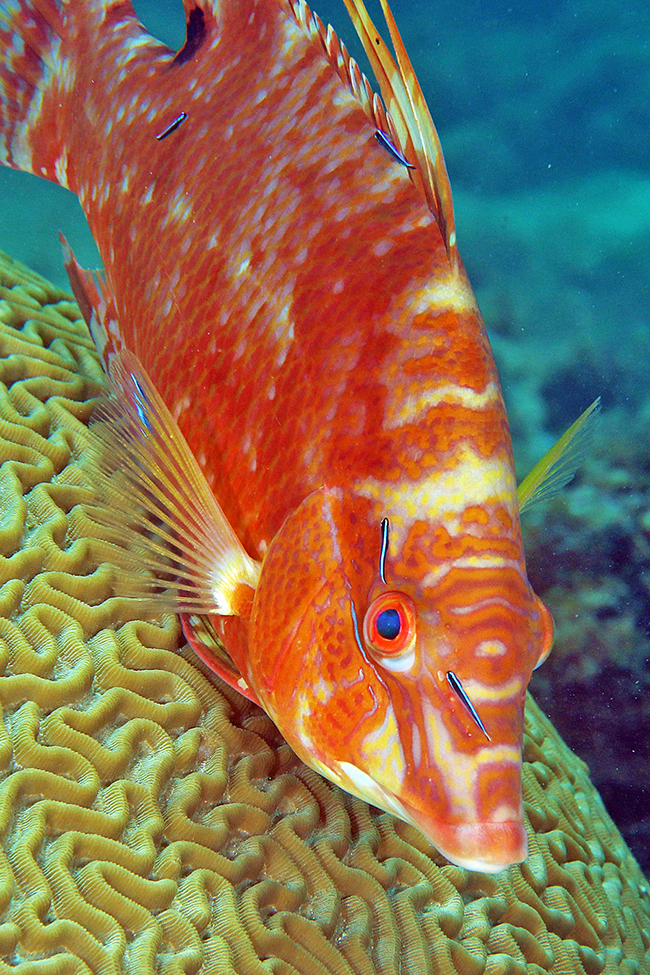 Which is the most changing fish?

The most able to change colour in thousandths of a second in mimicking or in showing its own emotions.

Perhaps, if we count the colours and the patterns of the possible instantaneous liveries, that might be Lachnolaimus maximus (Walbaum, 1792).

Many are the fishes that change their appearance acting on their chromatophores, the cells of the skin containing the colours, present, besides fishes, also in other animals such as the amphibians, the reptiles, the crustaceans and the cephalopods.

They use them, expanding or contracting them, for mimetizing, hunting, or even communicating with each other in a sort of visual language.

Thanks to these, for instance, the Antennarius commerson astonishes, motionless, the preys disguised as a sponge, and the smart Aulostomus chinensis protects with colours and changing drawings its fragility, while steals from the mouth the food to the mullets joyfully swallowing when passing, when this occurs, also fishes having its size.

The voracious Cephalopholis argus has mimetic liveries and threatening liveries for those who dare to enter its own territory.

In this case, especially in the breeding season, even engages in virtual duels of chromatophores to avoid, if possible, the physical confrontation.

The one who creates the most intense colours is the strongest, and the other withdraws.

And as if that were not enough, for proposing or accepting the mating, this fish can unsheathe instantly on the sides, that suddenly get black, the unmistakable pattern of a luminous white dot with the shape, definitely unusual, that recalls a keyhole.

“Wizards of the reef”, as Capt. Jacques-Yves Cousteau said, are then the Scaridae, the famous, the famous parrotfishes, with their capacity of changing rapidly look and wear night liveries with fanciful mimetic pyjamas.

Lachnolaimus maximus belongs like these last to the class of the Actinopterygii, the ray-finned fishes, to the order of the Perciformes and to the analogous multicoloured family of the Labridae, that counts 70 genera and 559 species. A family so close to the parrotfishes that some, molecular research in hand, would like to incorporate there, with 10 genera and 100 species more, also the Scaridae, placing them in the subfamily Scarinae. 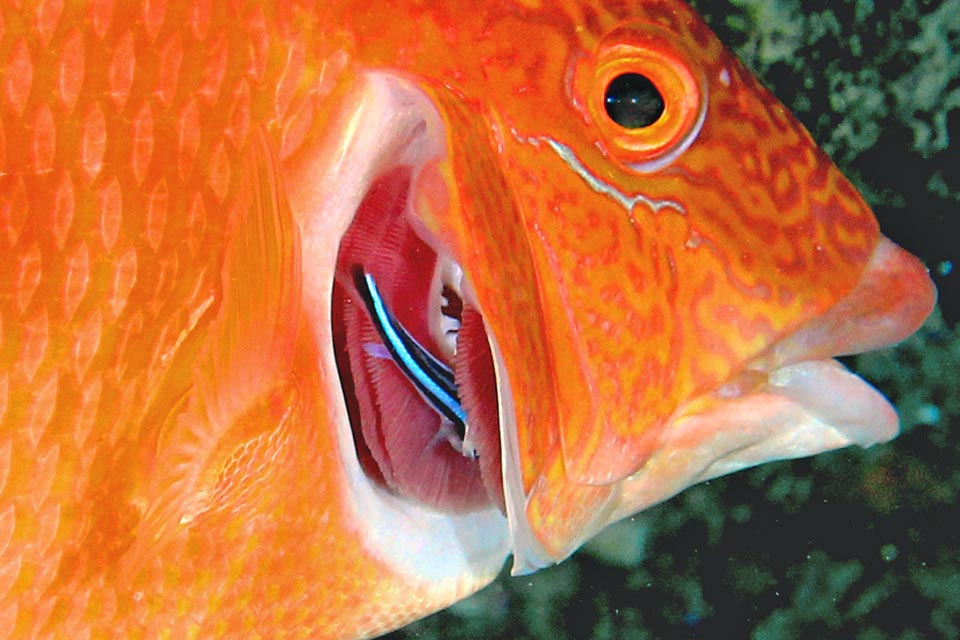 Doctors on duty are the tiny Neon gobies (Elacatinus oceanops) who carry on an accurate job, even inside the gills © Kevin Bryant

The name of the genus Lachnolaimus, created by Cuvier in 1829, comes from the old Greek “λάχνη” (lachnos), down, and “λαιμός” (laimós), throat, with reference to the pharyngeal surface of this fish where instead of the grinding teeth of the scarids stands a membrane that seems velvety.

In our case it is not in fact a herbivorous fish that grinds tufts of algae and madrepores but a carnivore that nourishes of benthic invertebrates. 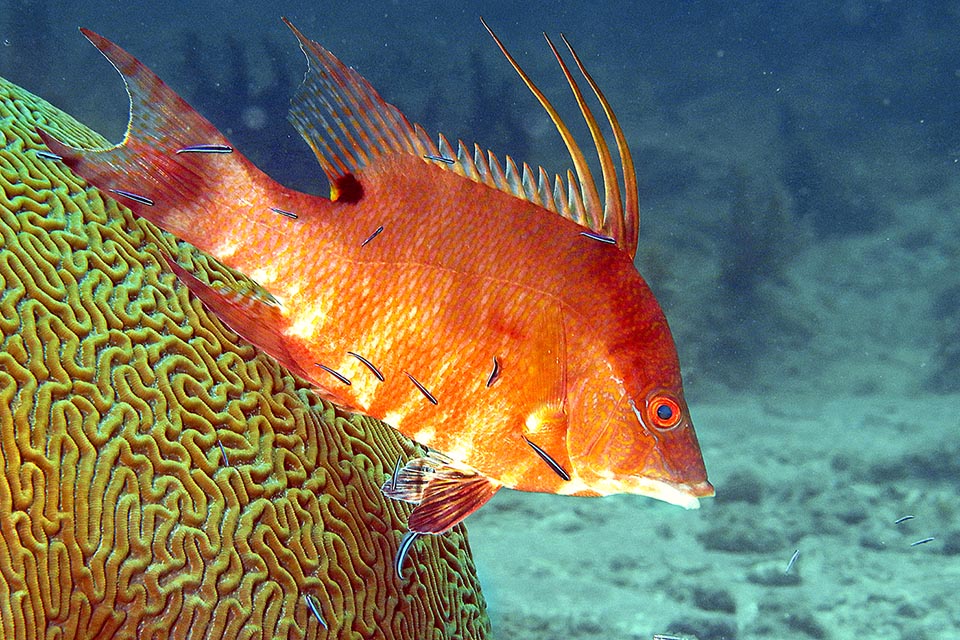 The patient is a Lachnolaimus maximus female, species known, besides the first three rays of the dorsal fin, the longest in the wrasses, for its quick-changing skills © Kevin Bryant

The specific term maximus, maximum in Latin, reminds us that this is the greatest wrasse in the western tropical Atlantic.

Conversely, the Italian name is missing.

Nothing surprising for this far away diffusion area and for the cumbersome size for transforming it into a popular aquarium fish. 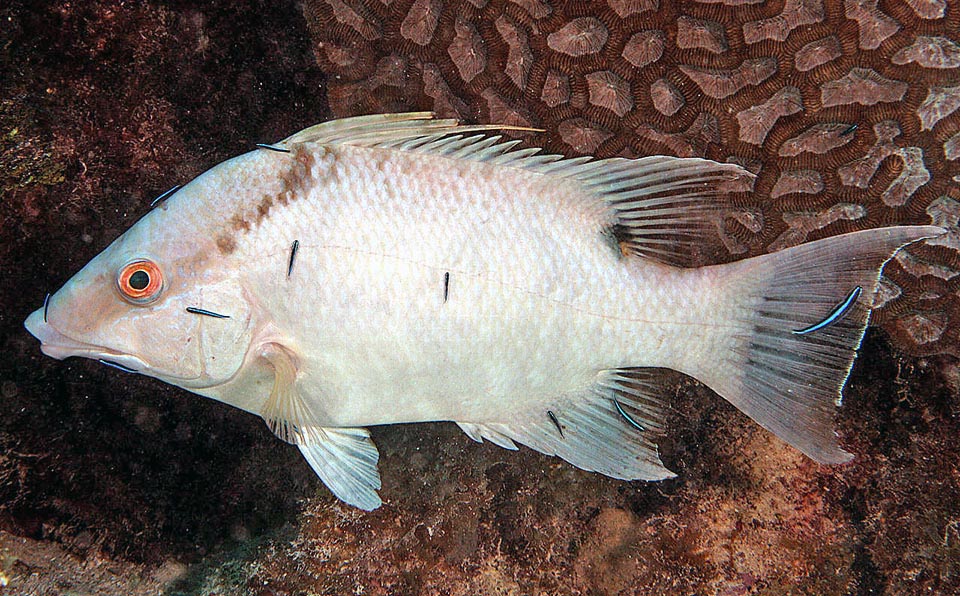 Here,moving behind the madrepora, has suddenly turned white, maybe to get noticed better in the crowded clinic © Kevin Bryant

In the USA it is called “Hogfish”, that is Pigfish, because of the shape of the head and of its rooting about on the bottoms, whilst for the Francophones it is the “Labre capitaine”, that is the captain wrasse, with reference to the three long rays of the dorsal fin that recall, like stripes, the rank of captain. 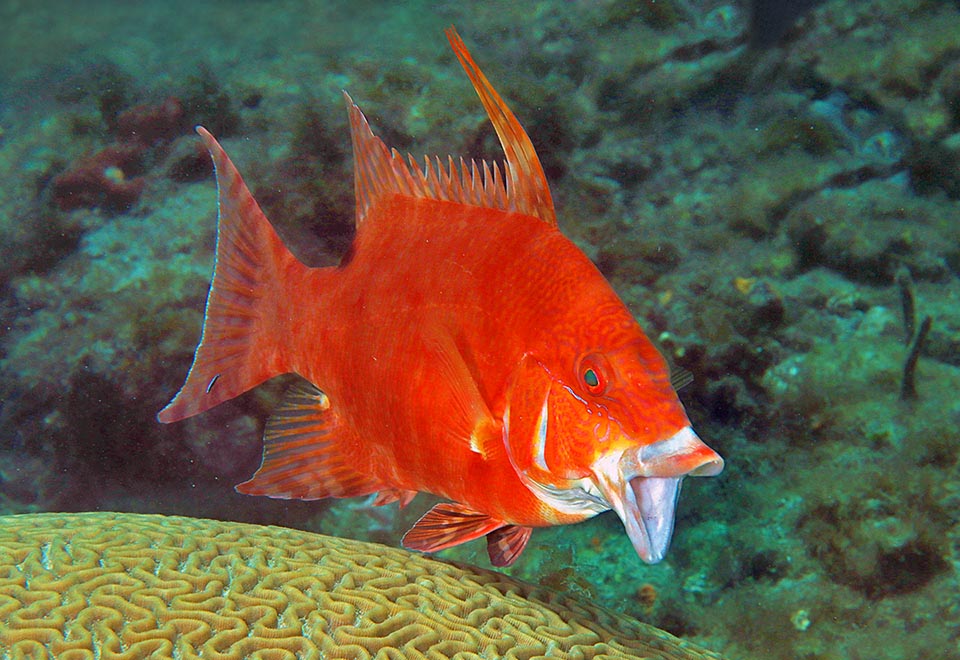 Then goes up again, maybe annoyed, mouth open, with flame red livery: doctors are caring other clients or maybe are no longer hungry © Kevin Bryant

Lachnolaimus maximus is present along the west Atlantic coasts, from Nova Scotia, in Canada, to the northern part of South America.

Therefore, we find it, after Bermudas and Florida, in all sites facing the Gulf of Mexico and, more generally, in the Caribbean Sea up to French Guiana. 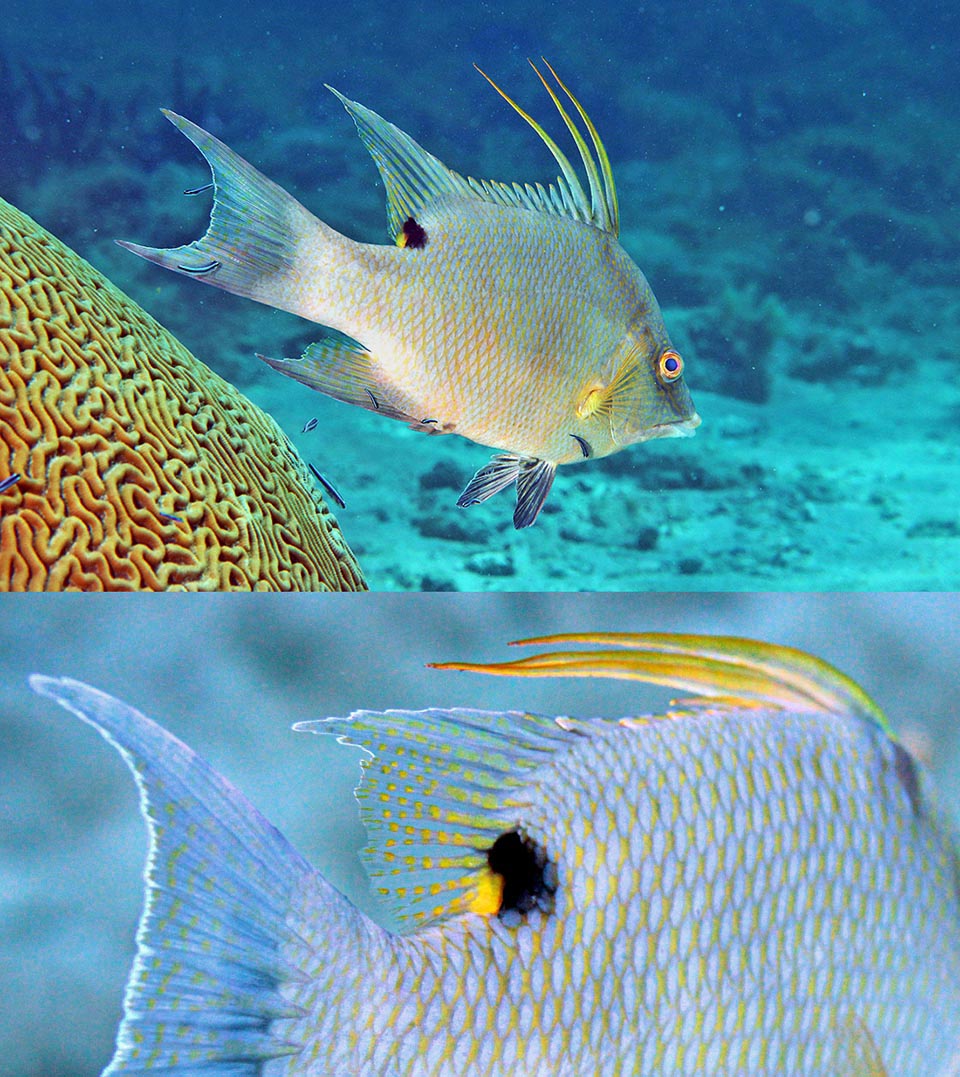 After all, it was now well cleaned and walks away with the current livery. Note the black spot with yellow dot, typical to females, close to the end of the dorsal fin © Kevin Bryant

It is a benthopelagic diurnal species that goes swimming in relatively shallow waters, between 3 and 30 m of depth, with an exceptional report of around 90 m. The adults frequent the sandy and detrital bottoms, among the madreporic formations and the gorgonians, whilst the young individuals mainly grow hidden in the seagrass meadows. 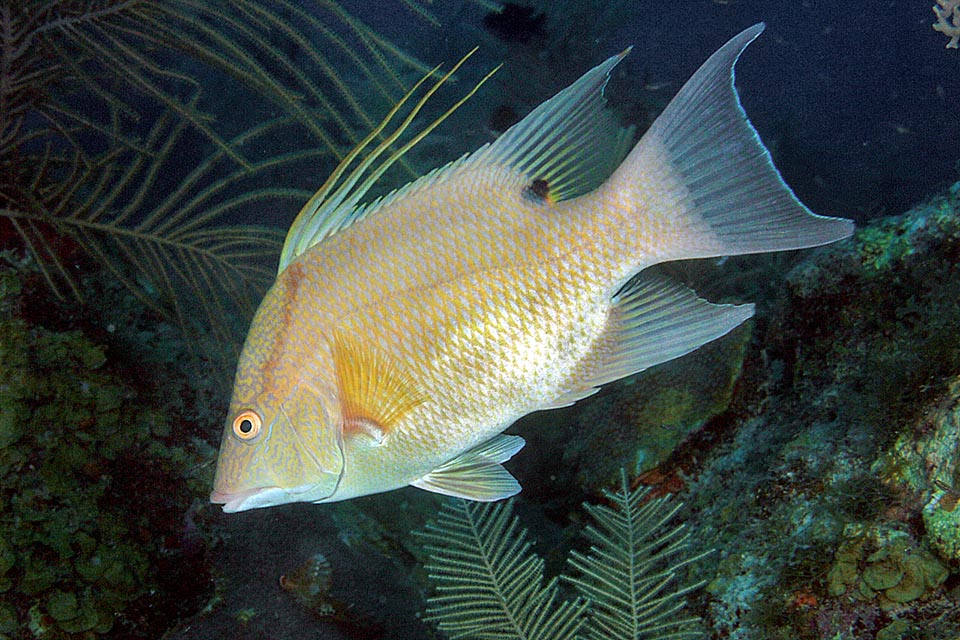 Considered by some as an archaic labroid, with its oval laterally compressed and not elongated body, as show mostly the membres of this family, Lachnolaimus maximus can reach 91 cm of size and 11 kg of weight, even if its normal length is of about 35-45 cm.

Although long-lived, with a record of 23 years, in fact is an overfished fish to whom, often, is not granted enough time to grow and to reproduce. 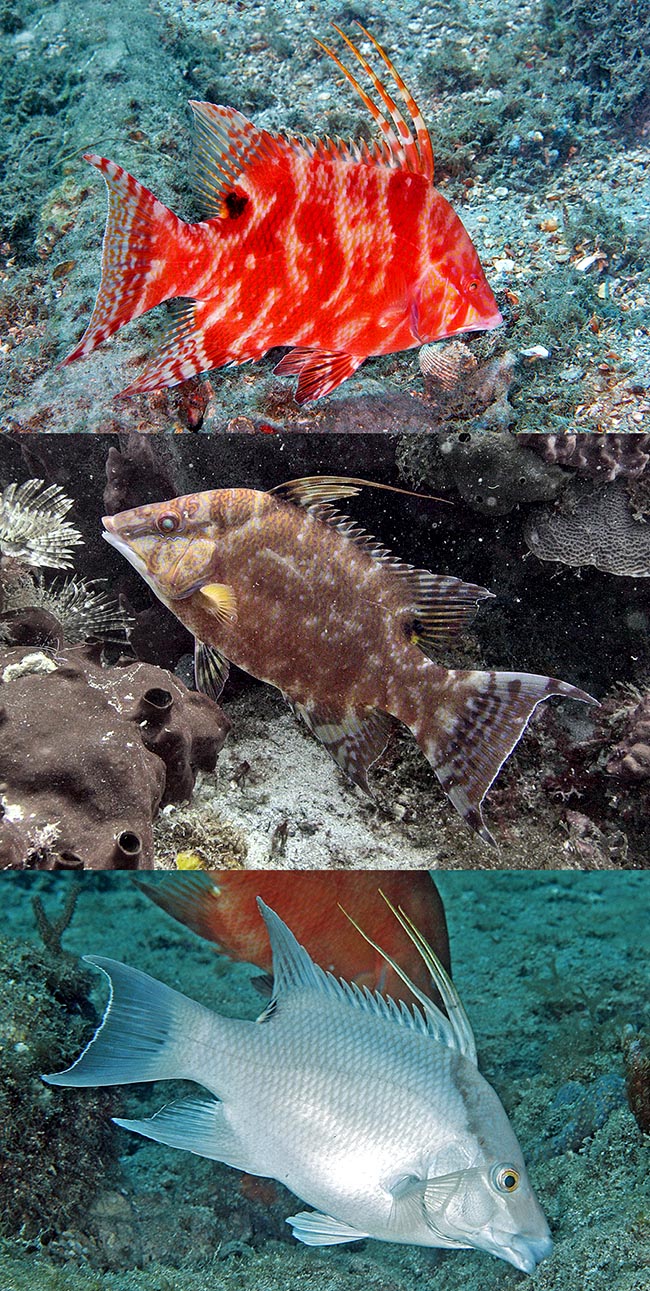 Here other incredible instant changes of female livery, also called primary, because after spawning at least once, also the body of the females does change, considering that they slowly transform into males. Starting from the top © Kevin Bryant, © Guy Van Laere and © Kevin Bryant

The pectoral fins, to which is entrusted the motor thrust of the wrasses, have 15-16 soft rays. The pelvic fins are normal and the caudal is lunate.

The scales are big and the livery, besides being extremely variable, changes with age together with the shape of the snout.

In fact, this is a hermaphrodite proterogynous monandrous species, with females that, once reached a certain size, transform into males.

There are no, as at times occurs in certain parrotfishes, primary fishes, that is, such as from the birth even if with female livery. Here, to become males, it is necessary to have laid eggs for at least one reproductive season.

The ovaries, in short, must work before giving way to the testicles.

The conversion, irreversible, happens very slowly, usually starting from 30-40 cm of length and with 3-5 years of age, even if sporadically may still be found in circulation females long almost 70 cm and more than 12 years old. Maybe they were pleased as they were and did not want to spawn.

The initial phase, female, is recognized at first sight from the profile of the snout forming a straight line with the front.

Furthermore, there is a black dot with, close to it, a small yellow dot at the end of the dorsal fin and a dark stroke that starts from the upper lip to reach, passing under the eye, the three long dorsal rays.

A light blue reticle finally covers the head and the operculum.

In the intermediate phase, that of the change of sex, the zone towards the back, delimited by the dark stroke, takes on hazel shades ctrasting neatly with the rest of the body, and the snout no longer appears as an extension of the front because takes form a characteristic depression between these two parts of the body.

Parallelly we can glimpse on the sides, almost at the centre just over the pectoral fin, the emerging of a black spot, typical to the males. 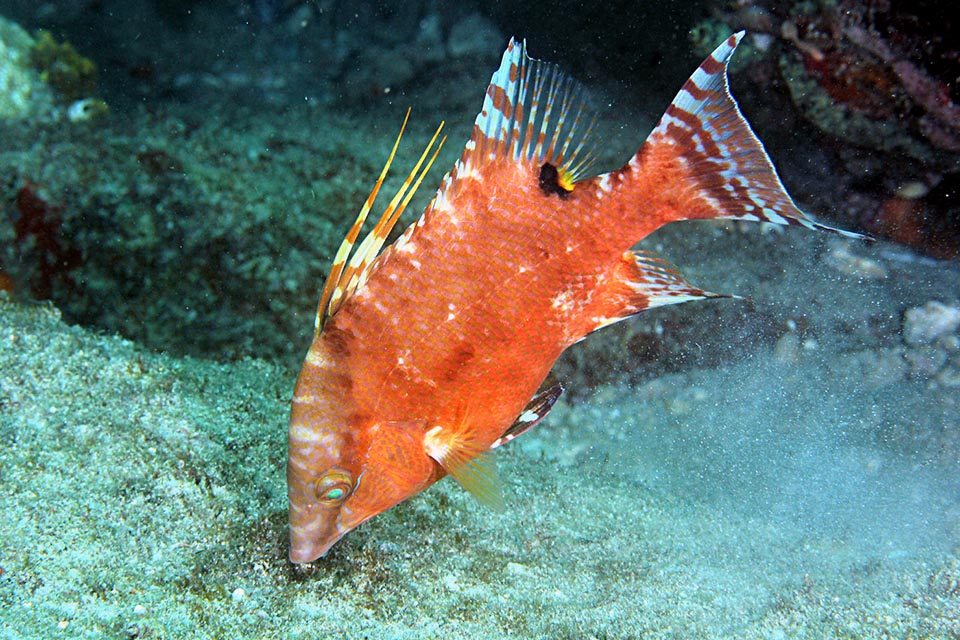 Female blowing on the sand getting out small molluscs and crustaceans. Due to its continuous rooting, in Florida this species is called Hogfish © Kevin Bryant

It must be added that in all phases, especially in the first one, the fish may get marked mimetic or emotional patterns, formed by pale or dark streaks on a white, beige, brown, salmon red or flame red background.

Lachnolaimus maximus nourishes of molluscs, crustaceans and of sea urchins breaking shells, carapaces and dermoskeletons thanks to its robust canines. 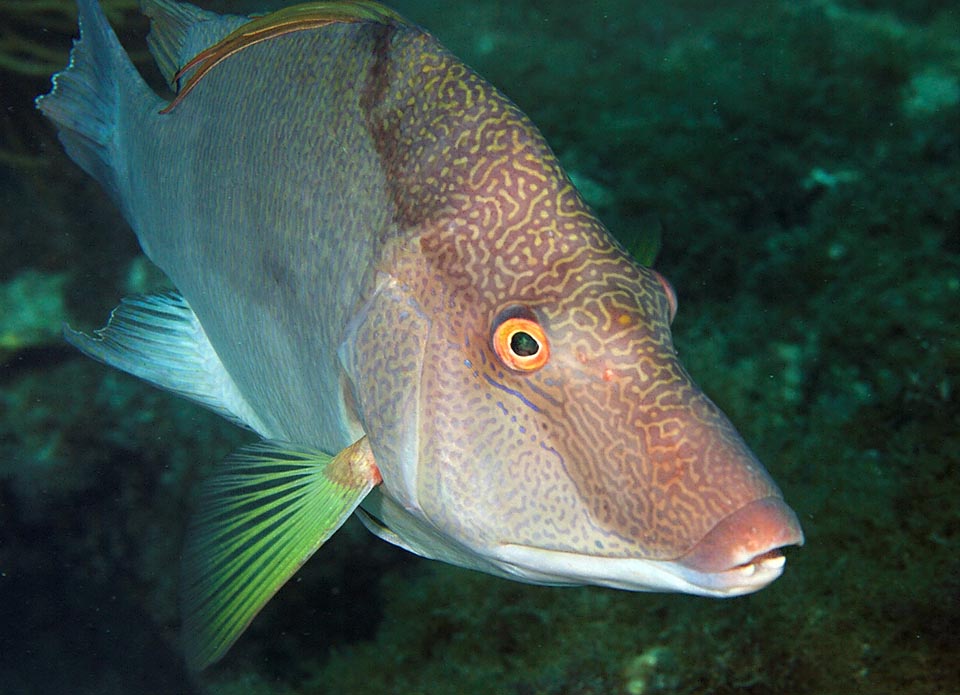 Transition livery. The zone over the dark line, going from the lip to the first rays of the dorsal, assumes brown shades that stand out more and more with the rest of the body © Allison & Carlos Estape

To drive them out, like other fishes belonging to groups completely different such as Chilomycterus antillarum or Rhinecanthus assasi, it does not hesitate to remove the sand of the bottoms with powerfuls jets of water from the mouth.

The terminal males have a harem and the reproduction does not happen in pairs but in groups, just before the sunrise or by the sunset, between late winter and spring.

The ritual, repeated several times because not all the females are ready to spawn, foresees the ascent of the whole harem up to the surface with a circular swimming, initially slow, then faster and faster. 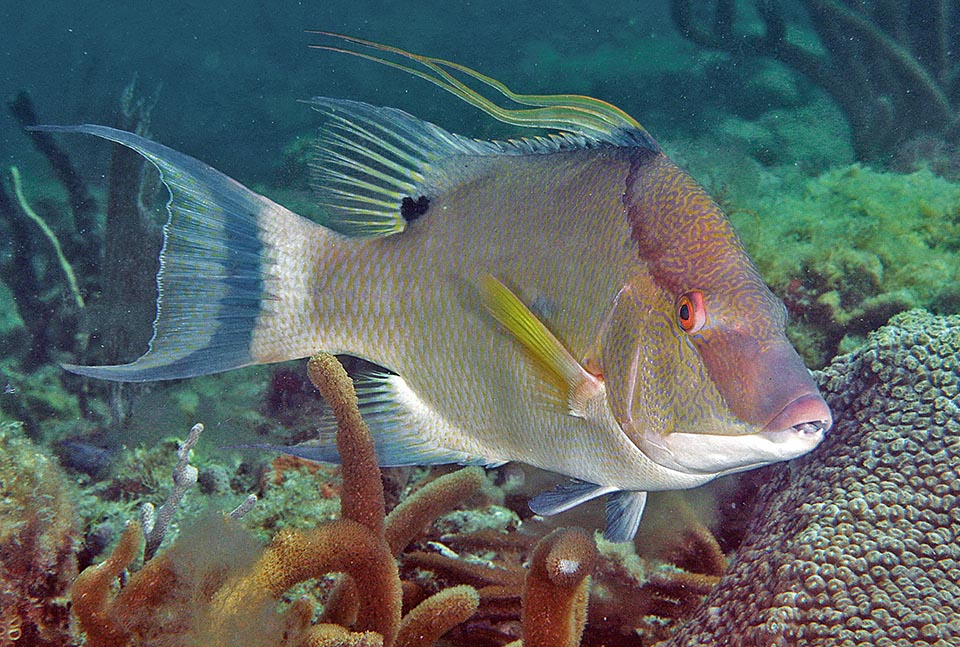 Here can be seen on the sides, near to the pectoral fin, the rising of the black dot typical to the males, like some zones of the fins that become black © Kevin Bryant

In this way forms a column of moving water, a sort of vortex where the eggs receive the gametes of the male.

The eggs hatch the next day and the larvae, equally planktonic, are carried away by the currents for some weeks before performing the metamorphosis and reach the bottom. 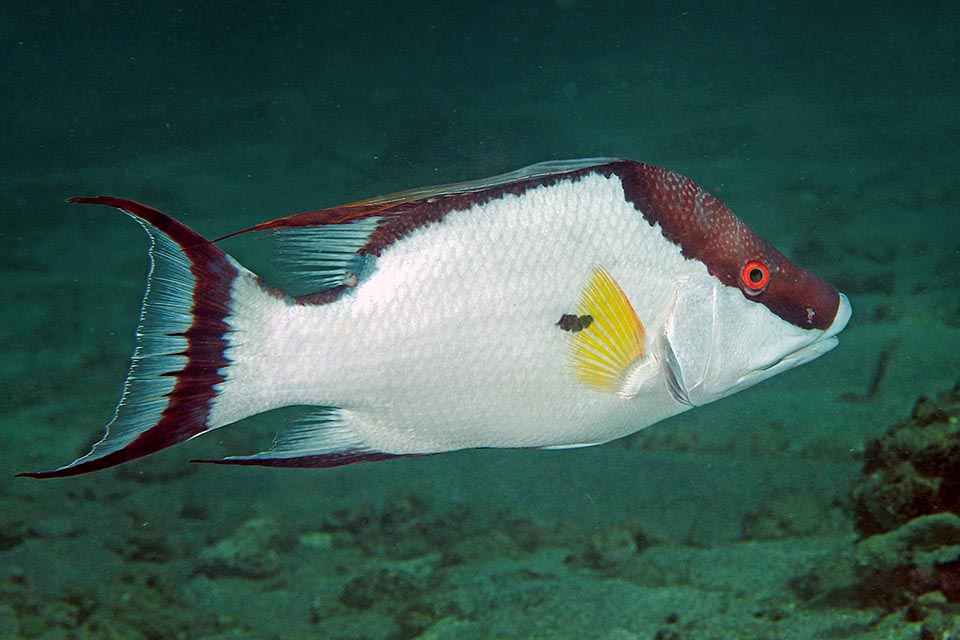 A male typical livery, mostly white. The black spot looks like a target for a harpoon shooting and this species is unluckily endangered because it is overfished © Kevin Bryant

The resilience of Lachnolaimus maximus would be acceptable, with a possible doubling of the populations in 1,4-4,4 years, but in spite of this and of the vast range of the species, it is a fish that already appears as vulnerable in the Red List of the endangered animals.

And this, as already mentioned, due to the overfishing that often does not leave these animals the time for reproducing.

As a matter of fact, the flesh is considered as excellent, even when consuming it may occur cases of ciguatera, a serious poisoning linked to some toxic species that may enter their diet. 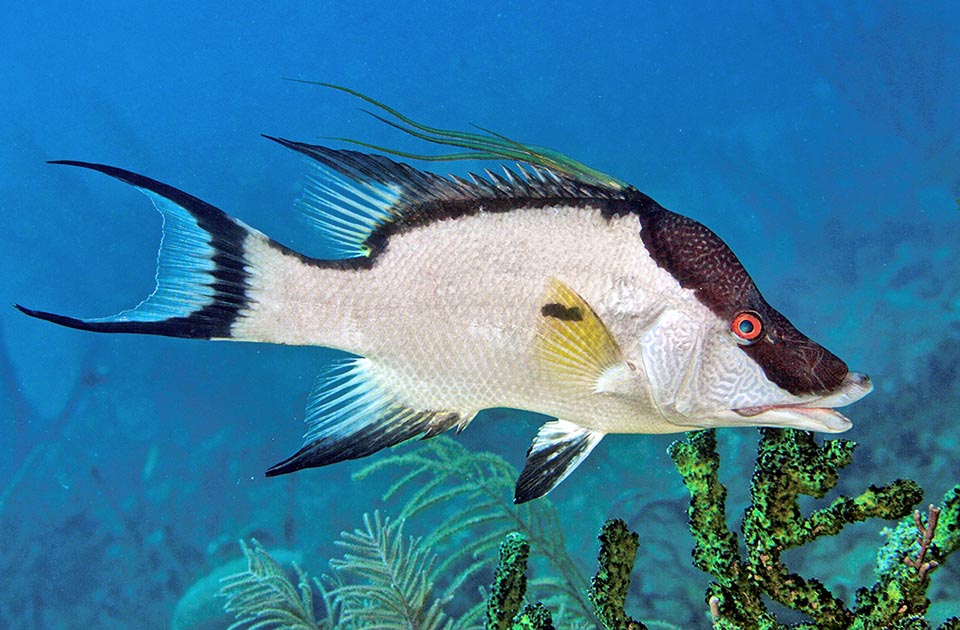 A stately male who had the luck of getting old. Exceptionally they can reach the 91 cm of size and hold a harem with whom they reproduce in group © Allison & Carlos Estape

Therefore, safe farms have been created for restocking the restaurants and for protecting the species.

In the USA, even outside the reserves, hunting with the cylinders is forbidden and no more than 5 can be fished with the rod per day.

However, capture is allowed only of specimens under the length of 30,5 cm, because the bigger ones are rightly preserved for reproduction. 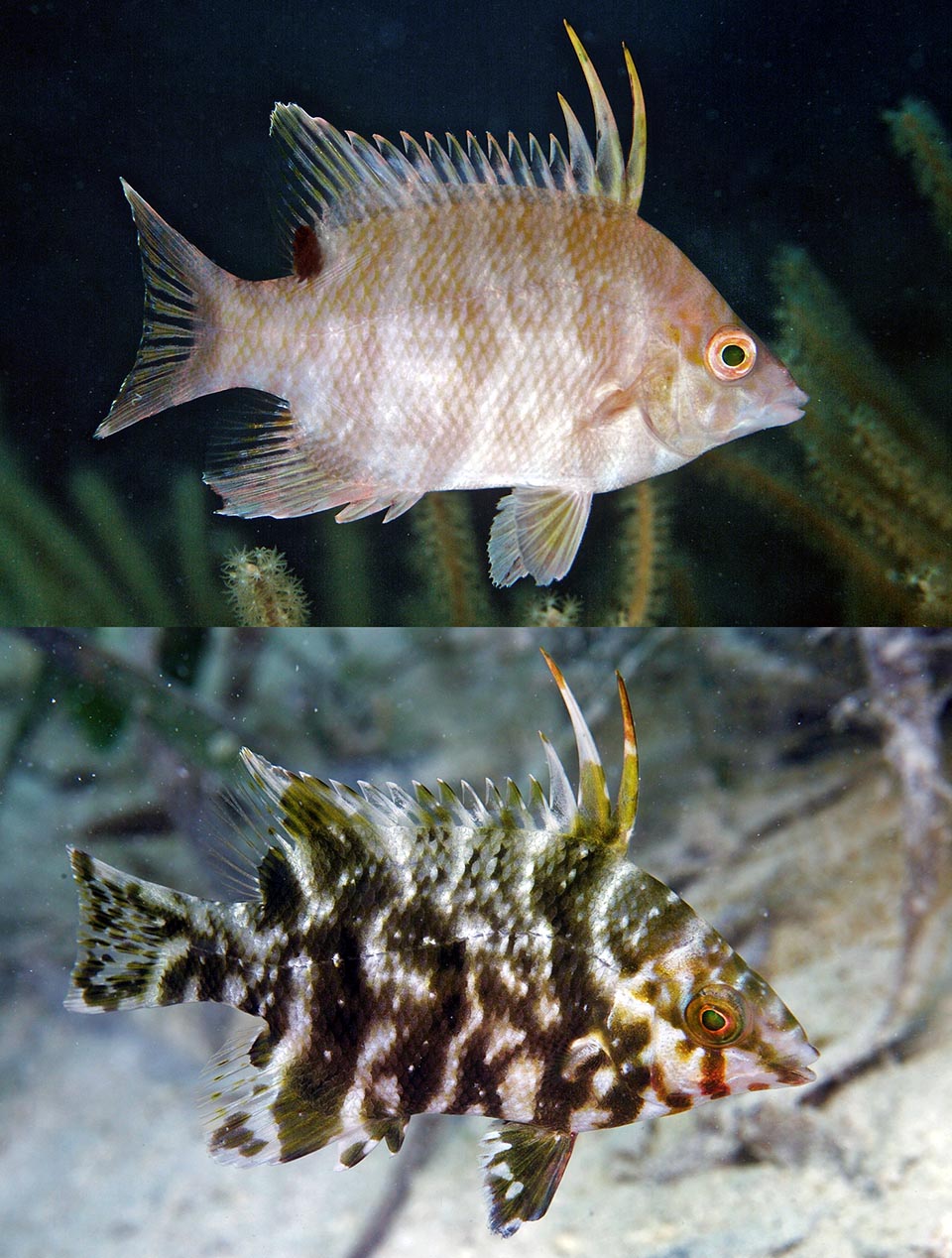 Eggs and larvae are pelagic. The young appear from early age, quick-change like the adults but have the first three dorsal rays much shorter © Allison & Carlos Estape

In spite of that, their number has dropped again, depending on the zone, of 30-60% and in some locations they are now only a memory of the past.

The vulnerability index of the species by the end of 2021 appears already dramatically high, marking 67 on a scale of 100.

Lachnolaimus maximus was last modified: May 3rd, 2022 by Peppino