Roses without grafting : they grow up on their roots. Advantages.

Well known roses cultivated without grafting. They live on their own roots. No problem with undesired shoots. They have a better bearing. 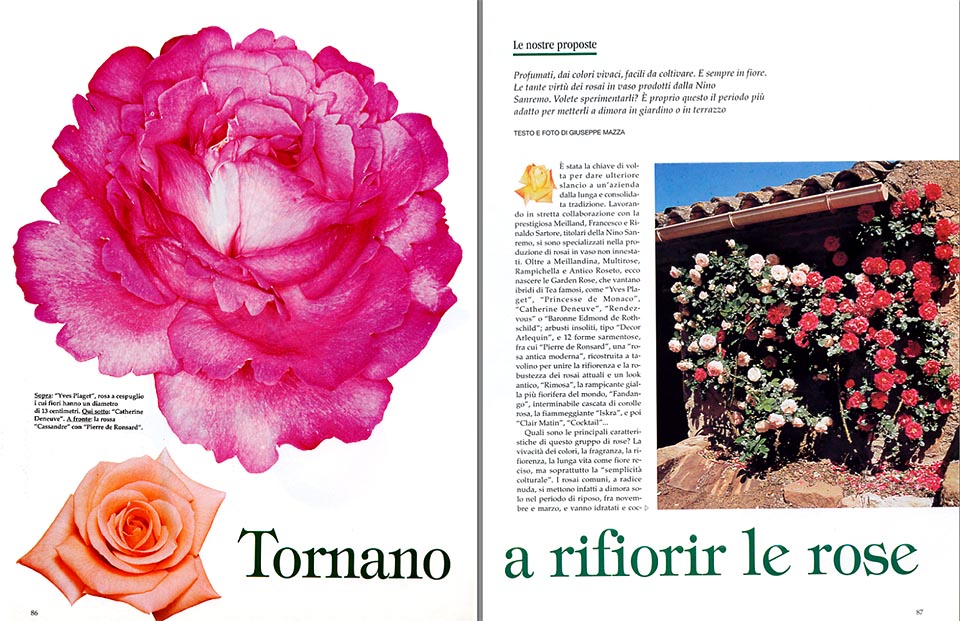 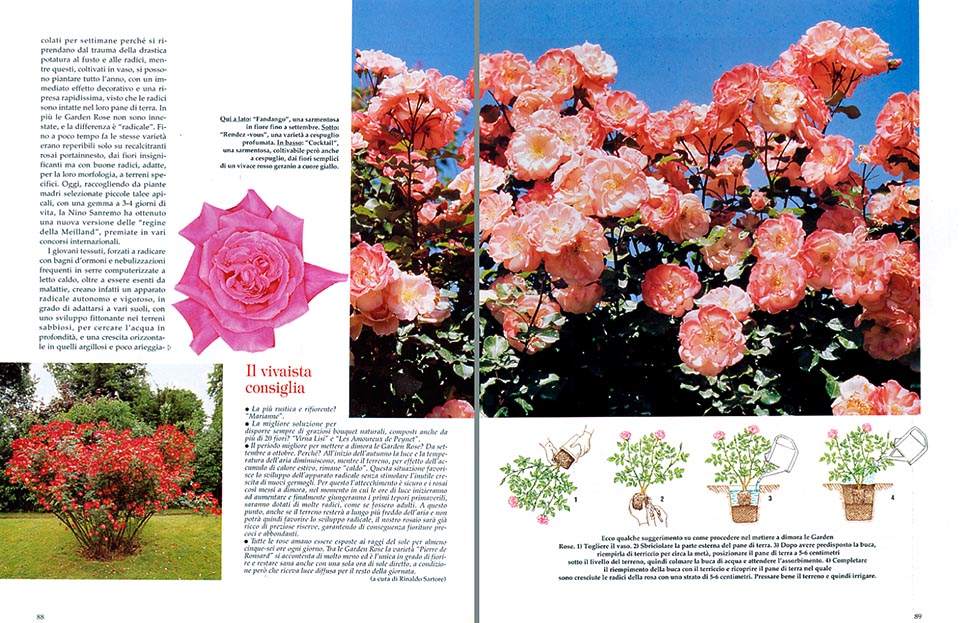 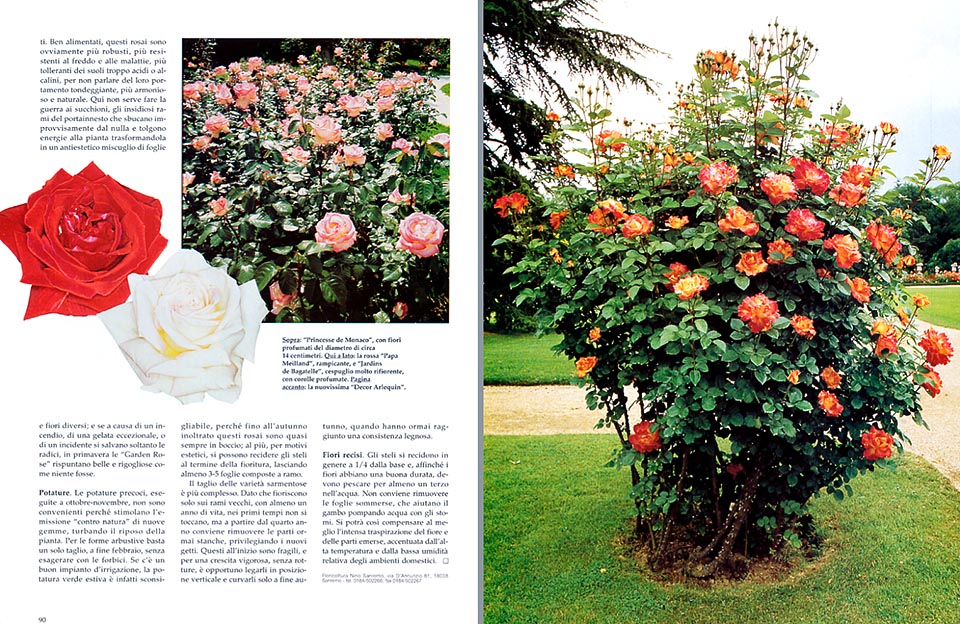 Most of the roses available in the gardens are “grafted”, and with “bare root”. The Nino Sanremo is doing exactly the contrary.

Thanks to the experience heaped up with Meillandina and Multirose, it has isolated, in joint work with the Meilland, an ample range of varieties available, all the year, in pot, and not in need of graft-carrier.

They are called “Garden Roses”, and boast famous hybrids of Tea, such as ‘Yves Piaget’, ‘Princesse de Monaco’, ‘Catherine Deneuve’, ‘Rendez-vous’, ‘Louis de Funès’, ‘Jardins de Bagatelle’, ‘Papa Meilland’, or ‘Baronne Edmond de Rotschild’; unusual shrubs, like the ‘Decor Arlequin’, and twelve sarmentose forms, between which ‘Pierre de Ronsard’, a “modern ancient rose”, reconstructed at a desk, to unite the re-flowering and the strength of present rose-bushes to an ancient look, ‘Rimosa’, the most floriferous yellow climber in the world, ‘Fandango’, endless cascade of ping corollas, ‘Iskra’, a classical blazing floribunda, ‘Clair Matin’, bunch-like it too, with pastel pink changing petals, and ‘Cocktail’, with geranium red simple flowers, with yellow heart, tillable also as bush.

What is the philosophy of the group?

The liveliness of the colours, the fragrance, the re-flowering, the long life as cut flowers, but, above all, the “cultural simplicity”.

The common rose-bushes, with bare root, are put, in fact, in place only during the resting period, between November and March, and must be hydrated and cuddled for weeks, in order that they recover from the shock of the drastic pruning of the stem and the roots; whilst these, cultivated in pot, can be planted during the whole year, with an immediate decorative effect and a very fast renewal, seeing that the roots are undamaged in their block of land, full of reserves, and with a crazy desire of growing up.

Furthermore, the “Garden Roses” are not grafted, and the difference is “radical”.

Until short time ago, the same varieties were available only on recalcitrant, “graft carrying”, rose-bushes with insignificant flowers, but with good roots, suitable, for their morphology, to specific grounds.

Nowadays, picking up from selected mother plants small apical cuttings, with a gemma with 3-4 days of life, the NINO SANREMO, has got a “new version” of the “queens of the Meilland”, awarded in various international contests. The young tissues, compelled to root with baths of hormones and frequent nebulizations in computerized greenhouses, with “warm beds”, besides being exempt from diseases, create in fact an autonomous and strong root apparatus, capable to adapt to different soils, with a “tap root” in sandy soils, to look for water in depth, and an “horizontal” growth in the clayey and less ventilated ones.

When well nourished, these rose-brushes are, obviously, more robust, more resistant to the cold and the diseases, more tolerant of too acid or alkaline soils, not to talk of their roundish appearance, more harmonious and natural.

Here, it is not necessary to make a “war to the basal shoots”, the treacherous branches of the graft carrier, which come out, suddenly, from the nothing, and take off energies from the plant, transforming the same in an unaesthetic mixture of different leaves and flowers, and if, due to a fire, or an exceptional frost, or of an accident, only the roots do survive, the following spring, the “Garden Roses” will come out beautiful and luxuriant as ever.

Early pruning, effected in October-November, are not convenient, because they stimulate an emission of new gemmae “against nature”, thus troubling the rest of the plant.

For the shrubby forms, one cut is sufficient, by the end of February, without exaggerating with the scissors. If there is a good system of watering, the summer “green pruning” is, in fact, not advisable, because till late in autumn, these rose-bushes are almost always in bud; and, in case needed, due to aesthetic reasons, we can cut the stems by the end of the flowering, leaving at least 3-5 leaves composed as a branch.

The cut of the sarmentose varieties is more complicated. As they blossom only on “old branches”, with at least one year of life, they are not to be touched during the first times, but, starting from the fourth year, it will be better to remove the parts by then tired, privileging the new shoots.

At the beginning, these ones are frail, and for a vigorous growth, without breakages, it is then better to tie them, in an upright position and bend them only by the end of autumn, when, at the top of their development, they have already got a woody consistence.

The stems are to be cut, generally, at 1/4 from the base; it is not good to cut too short stems, because, particularly when they are thin, the “stumps” will bend under the weight of the new growth.

For a good duration of the cut flowers, the stems must be dipped for at least one third in the water, and it is not good to remove the submerged leaves, which help the stem, pumping water with the stomata. In this way, we shall compensate in the best way the intense transpiration of the flower and of the emerged parts, which is, normally, increased by the high temperature and the low relative humidity of the domestic milieu.

Roses without grafting : they grow up on their roots. Advantages. was last modified: April 21st, 2020 by Giuseppe Mazza