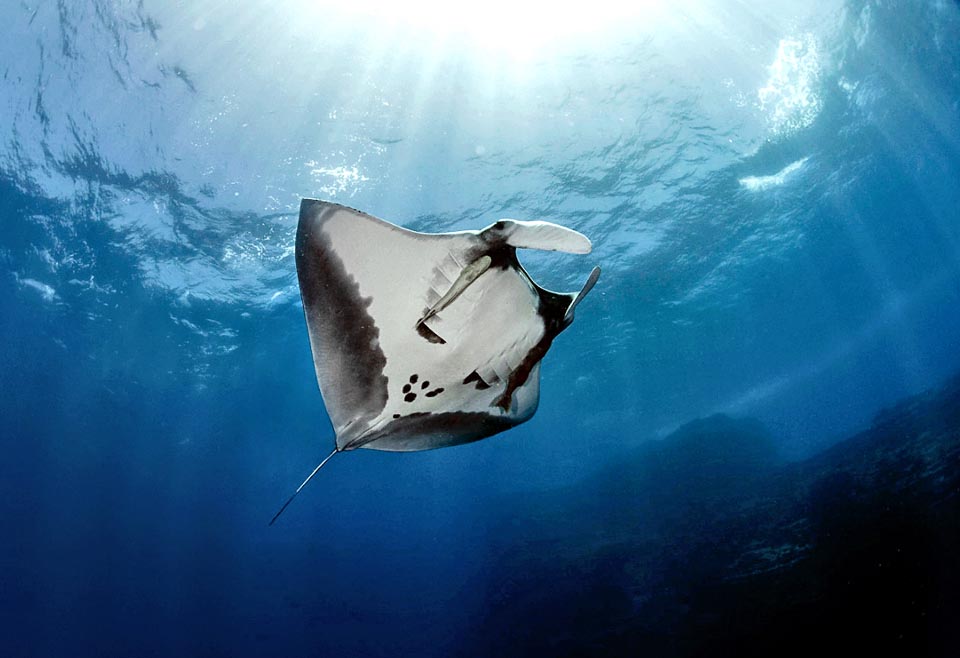 Good giant. with a maximum width of 9,1 m and 3 t, Mobula birostris is present in almost all tropical or warm temperate seas © Magnus Johansson

By an odd coincidence, the giants of the sea, such as the Blue whale (Balaenoptera musculus) of more than 30 m, or among the fishes the Whale shark (Rhincodon typus) reaching the 20 m and the Basking shark (Cetorhinus maximus) with its 15 m, mainly feed on the smaller marine species, the planktonic ones. This is also the case of the Mobula birostris (Walbaum, 1792), known as Giant manta ray, that can exceed with its huge pectoral fins, when spread, the width of 9 metres.

It belongs to the class of the Chondrichthyes, the cartilaginous fishes, to the subclass Elasmobranchia, that groups rays and sharks, to the order Myliobatiformes, dedicated to the rays, and to the family of the Mobulidae counting nowadays, in 2022, only the genus Mobula, born from the local name of a Caribbean ray, and 11 species. 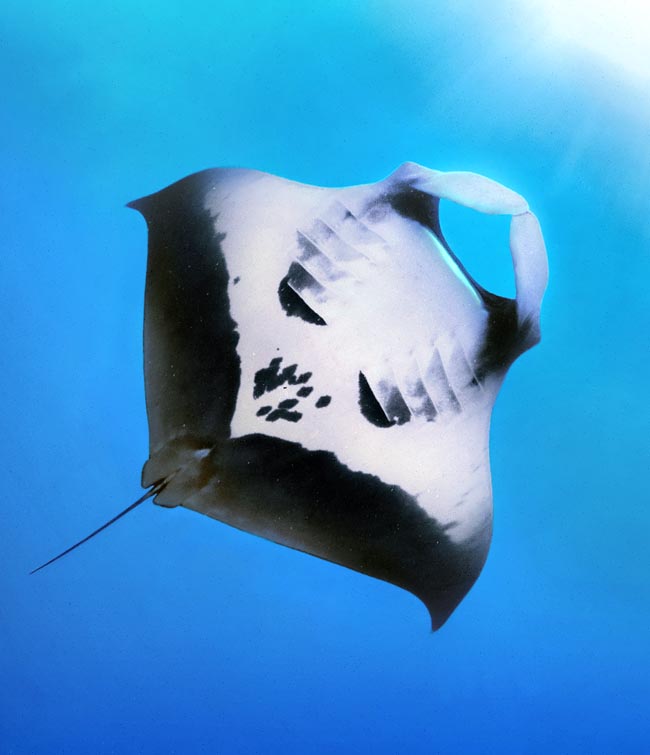 The specific term birostris, in Latin, with two rostra, refers to the two extensions of the pectoral fins, located on top of the head that can extend in a funnel shape for conveying the food to the mouth or for rolling up like horns.

Absent in the Mediterranean, the Giant manta ray circulates in almost all tropical seas, but also in the warm temperate ones such as, for instance, in Madeira and in the Canary Islands, or on the other side of the Atlantic to the Bermudas, along the American coasts of Carolina or the southern ones of Canada and in the southern hemisphere the Uruguay.

In the Red Sea goes up the Sinai Peninsula coasts. Then, we find it in South Africa, New Zealand, Japan and moving in the Pacific in the Hawaii Islands, California and in southern Peru.

Pelagic and migratory species, Mobula birostris is met often along the continental coasts, islands and islets, at times just surfacing, in the first 40 m of water, and, contrary to what was believed, it does not swim only in surface, but it nourishes also in depths reaching even the 1000 m.

The giant pectoral fins allow it a speed of 9-12 km/h with an elegant movement comparable to the flutter of the birds.

The upper part of the fish, knurled like the sharks, is almost black with the symmetrical drawing of two large white hooks on the shoulders that do not touch below on the back, even if in some rare specimen it may be wholly black with a white spot.

There is then a white drawing, V-shaped, starting from the base of the small dorsal fin in the direction of the head, and the tips of the fins can be slightly paler on the upper side. 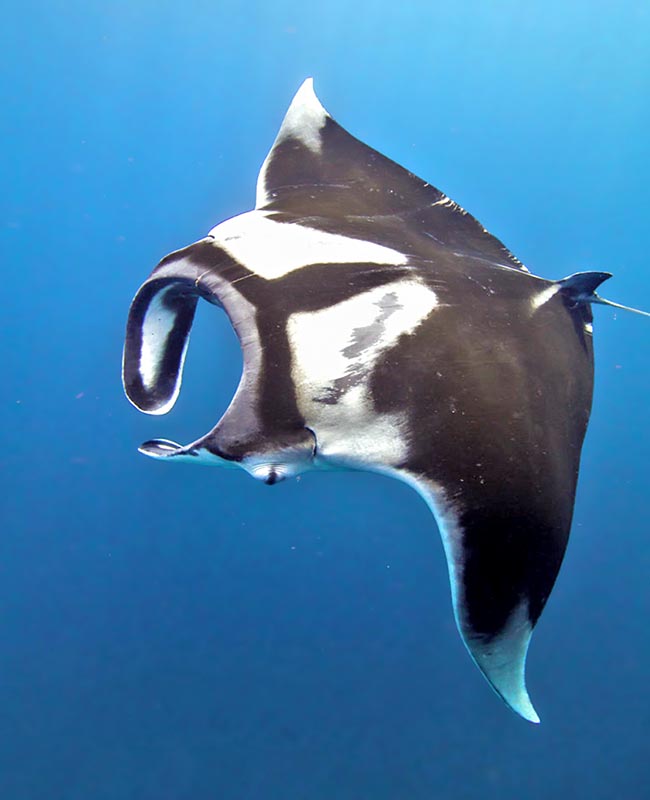 The white spots on the back are also characteristic © Magnus Larsson

The ventral side is white with a vast grey band, more or less dark along the lower edge, and the part around the mouth is black.

Under the last of the five gill slits, we note on each side a showy semilunar black spot followed by other spots different for everyone, and this is the main difference, besides the hook-shaped dorsal drawing, that distinguishes it quickly, on sight, from the analogous Mobula alfredi, that conversely displays several black spots on the chest between the gill slits.

Furthermore, the latter is much smaller in size, with a maximum of 5,5 m between the apices of the pectorals, but it is not easy to measure a ray while swimming and the specimens the divers meet along the coasts almost never reach extreme dimensions.

Beside the wide mouth, on the head stand two cephalic fins, twice as long as the width, born from an extension of the pectorals.

When they are rolled up to better split the water during the movements, they look exactly like two horns, hence the vulgar name in several languages of Devil ray.

At their base, on both sides, are located the eyes followed by the spiracle.

The teeth, arranged in a band on 18 rows, are modest and are present only at the centre of the lower jaw.

They serve only for holding small fishes and for blocking the female while mating, because the feeding is entrusted to the filter gill plates that collect the plankton and the food is swallowed whole. 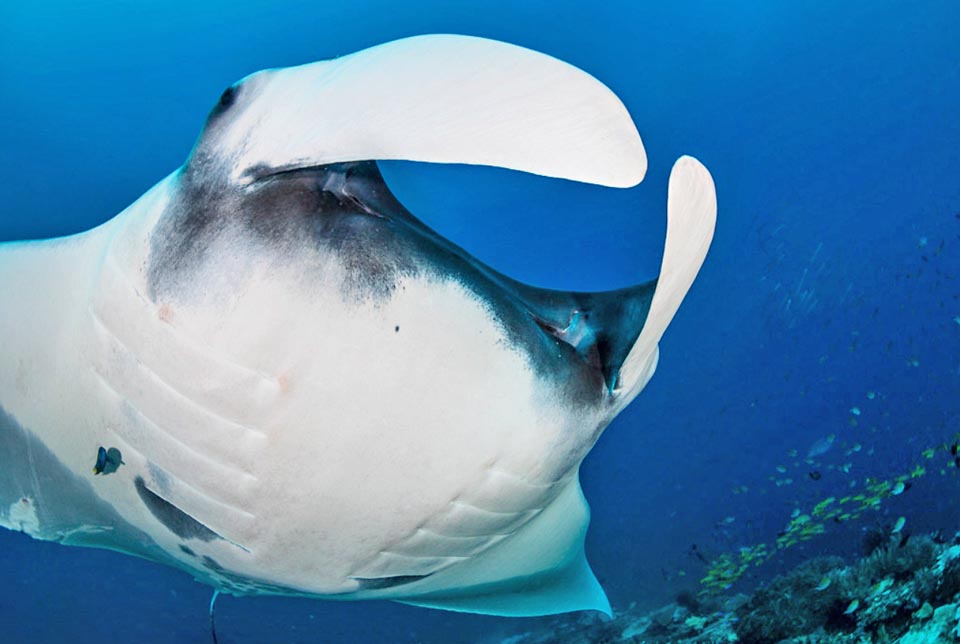 Detail of the head with the eyes at the base of the showy cephalic fins, used to direct the plankton to the huge mouth © Magnus Johansson

In the so-called “service stations”, quietly gets cleaned up the gill slits by tiny fishes like Labroides dimidiatus whilst is often annoyed by two species of remora (Remorina albescens and Echeneis naucrates)  that follow it which it seems it gets rid of now and then with showy leaps out of water, as often do the males while courting to astound with their strength the females or to signal their presence with a characteristic splash that can be heard kilometres far away.

The Giant manta ray is sexually mature when about five years old. The males must exceed 4 m and the females 5.

When one of these becomes receptive, sometimes it can be noted several males chase her forming a “train”. 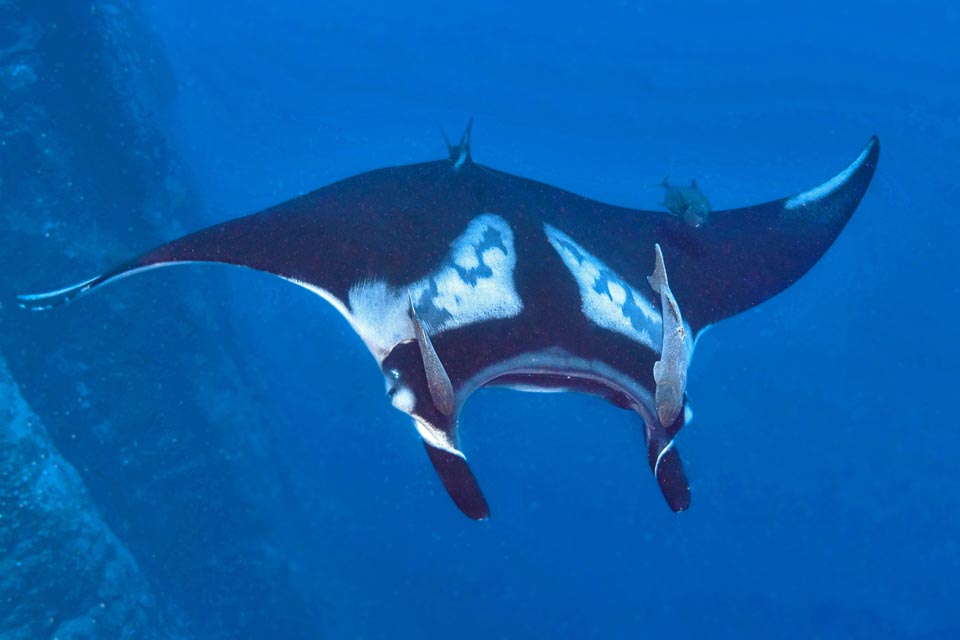 They can be rolled up, like horns, for better splitting the water while moving. To note also the typical white drawing on the back and two remoras © Michael Eisenbart

For the fecundation, the chosen one pinches with its teeth and then catches the pectoral fin of the female to fix belly to belly for a couple of minutes, the time necessary to introduce, like the sharks, into the cloaca of the partner one of its two pterygopodia and transfer the sperm.

The females are ovoviviparous with embryos that, once exhausted the reserves of the yolk sac, nourish absorbing a mucus secreted by the mother rich in proteins and in fats.

After a pregnancy of about 13 months, the deliveries take place in shallow waters. It is mainly a matter of one pup, exceptionally two, 1,1-1,3 m broad, with a weight of about 10 kg. 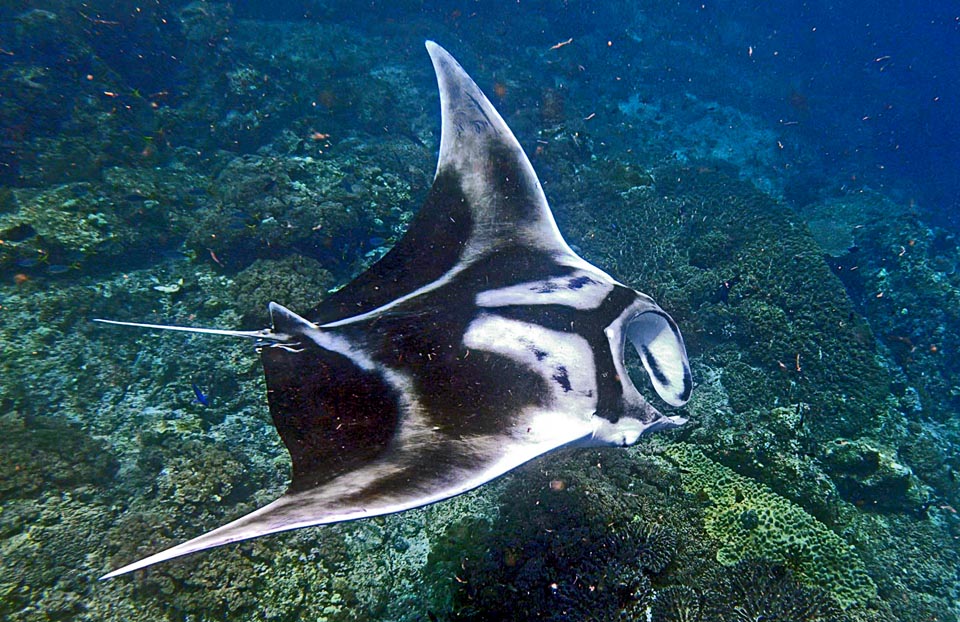 Typical posture for plankton hunting in shallow waters. But eats also small fishes and it seems that it can go down up to about 1000 m of depth © Dr Adelma Hills

Apart from the Orca (Orcinus orca) and the big sharks such as Carcharodon carcharias or Galeocerdo cuvier, the Giant manta ray does not have natural foes, but even if it may live 50 years, it is unluckily now reported with the maximum risk of extinction in the IUCN Red List as “Critically Endangered”.

The young growing along the coasts in fact often run into the nets and during the last decades the population has been too fished for the flesh, the liver rich in oil and the skin used as abrasive.

In Chinese culture the gill rakes are still now sold at astronomical prices for their alleged medicinal virtues, so much so that the fishing vulnerability index marks 64 on a scale of 100. 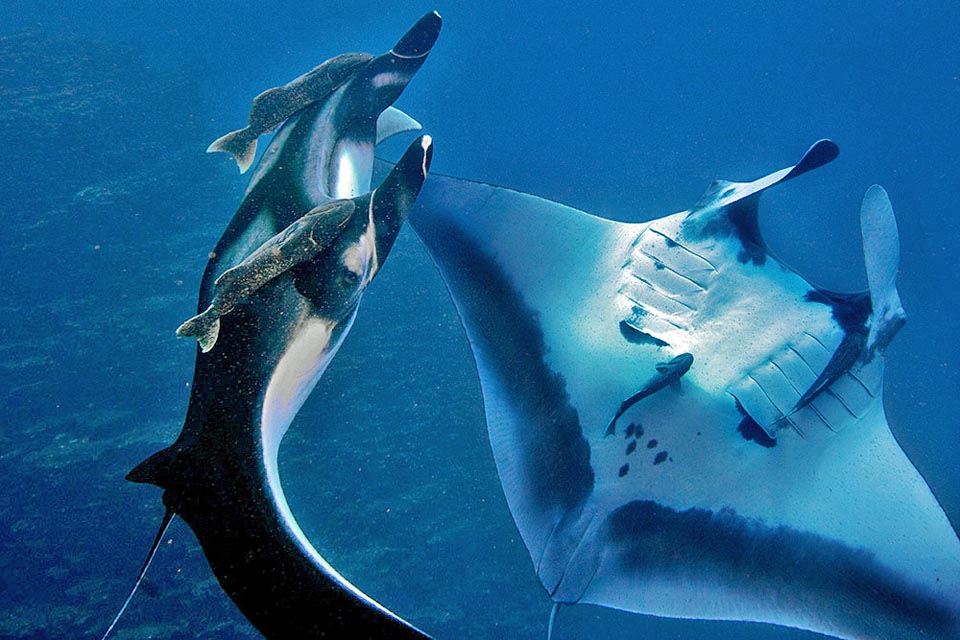 Mating, remora witnesses, lasts about 2 minutes, the time for catching the female to a pectoral and introducing one of the two claspers that convey the sperm. The females, ovoviviparous, deliver 1-2 pups after about 13 months of pregnancy, but the species, too fished and with very low resilience, is at great risk of extinction © Paddy Ryan

But, above all, the resilience of this species is extremely low with a minimum time for doubling the populations of more than 14 years.