History of the rose garden “ Princess Grace of Monaco ” in the Principality of Monaco.
Interview to M. Jean Giovannini. How the most marine rose garden in the world was created on land stolen from the sea. 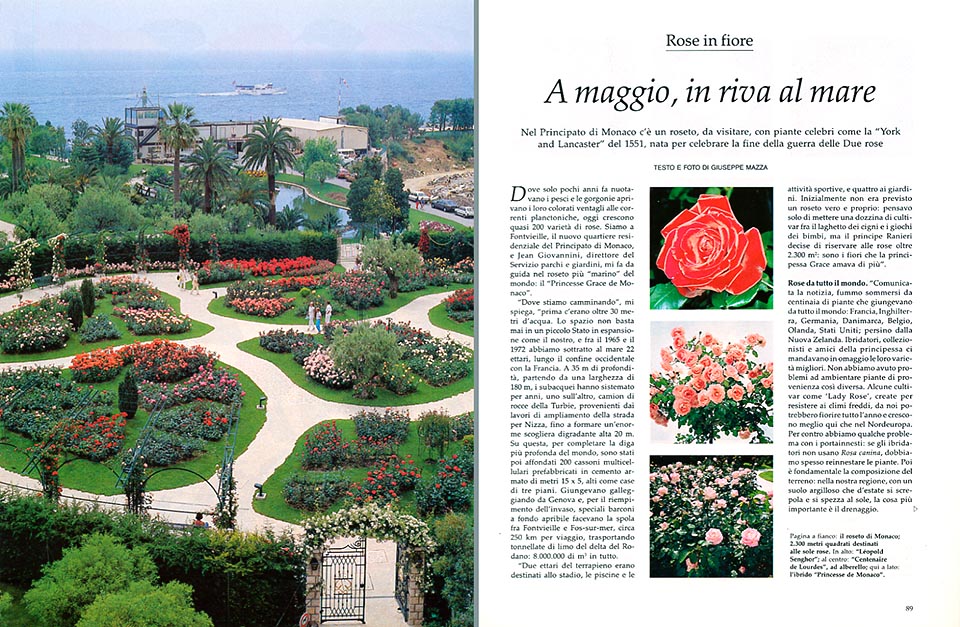 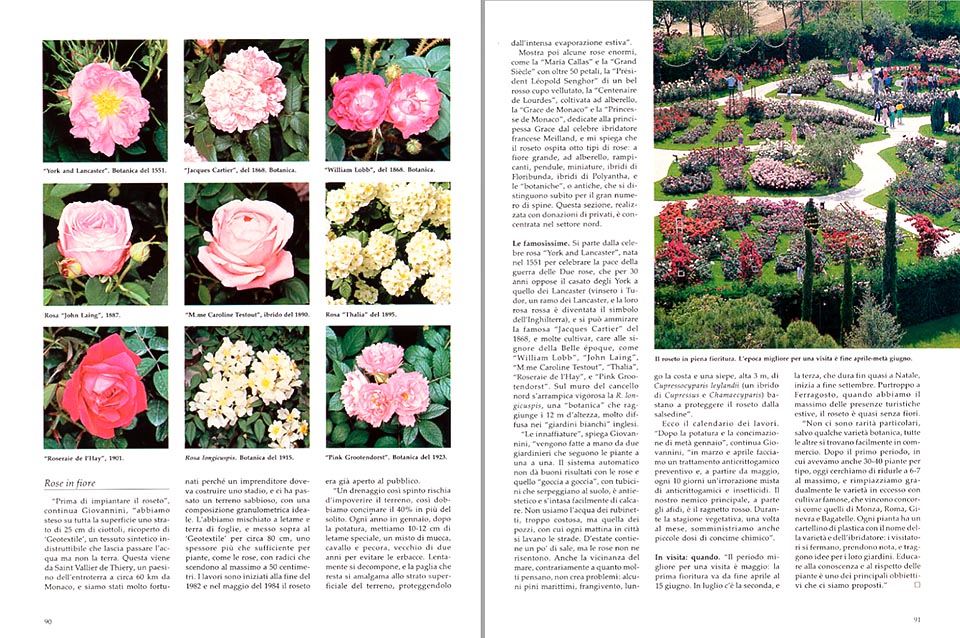 Where, only a few years ago, the fishes were swimming, and the sea whips were opening their coloured fans to the planktonic currents, now almost 200 varieties of roses are growing up.

We are not in Netherlands, but in Fontvieille, the new residential quarter of the Principality of Monaco, and Mr. Jean Giovannini, director of the Service Parks and Gardens, takes me around the most “marine” rosarium in the world: the “Princesse Grace de Monaco”.

Here, where we are walking, he explains to me, before, there were more than 30 metres of sea water. The surface is never enough in a small expanding Nation like ours, and, between 1965 and 1972, we have taken away, from the sea, 22 hectares, close to the western boundary with France.

At 35 metres of depth, starting from a width of 180 metres, the divers have placed, for years, one over the other, loads of trucks of rocks of La Turbie, coming from the works for widening the road for Nice, till to build up a degrading reef 20 metres high.

On top of this, for completing the deepest dam in the world, they have sunk 200 multi cellular caissons in reinforced concrete of 15 metres x 5, as tall as three storeys houses.

They were coming by sea from Genoa, and, in order to fill up the area, special barges with opening bottom, were going to and fro, between Fontvieille and Fos sur mer, about 250 Km each trip, carrying tons of slime from the delta of the Rhone river. A total of 8.000.000 cubic metres. Two hectares of the embankment were intended for the stadium, the swimming pools, and other sport activities, and four, for the gardens.

Initially, a real and proper rosarium was not foreseen: I was thinking to place a dozen of cultivars between the swans’ little lake and the space for the kids outdoor games, but the Prince Rainier III, upon the tragic demise of Princess Grace, decided to dedicate more than 2.300 square metres to the roses, which were the flowers Her Highness did love the most.

As soon as the news was communicated, we were submerged by hundreds of plants coming from the whole world: France, England, Germany, Belgium, Denmark, Holland, USA, and even from New Zealand.

Hybridizers, collectors and friends of the Princess, were sending us, with their compliments, their best varieties.

And, did you have any problem, I ask, for acclimatizing plants of so much different provenances?

Not necessarily. Some cultivars, like the ‘Lady Rose‘, created for the cold climates, in our country might blossom all the year round, and do grow better here than in North Europe.

On the contrary, we have problems with the graft carriers: if the hybridizers do not utilize the Rosa canina, we have often to graft the plants again. Then, the ground is fundamental: in our region, with a clayey soil, which in summer chaps and cracks under the sun, the drainage is the most important thing.

And, how did you manage? I interrupt him, getting more and more interested.

Before planting the rosarium, Giovannini continues, we have laid on all the surface a stratum of 25 cm of pebbles, covered by “Geotextile”, an indestructible synthetic tissue, which allows the water to get through, but not the land.

This one comes from Sait-Vallier-de-Thiery, a small town of the hinterland, about 60 Km far from Monaco, and we have been very lucky, as a contractor had to build up there a stadium, and has given us a sandy soil, with an ideal granular composition.

We have mixed it with manure and land of leaves, and then, placed over the “Geotextile” for about 80 cm, a thickness more than sufficient for plants like roses, which have roots going down, at the maximum, for 50 cm.

But, such a strong drainage, I ask, does not risk to impoverish the soil?

Yes, a little, and we have to manure the 40% more than usual.

Every year, in January, after the pruning, we put 10-12 cm of special dung, a mixture of cow, horse and sheep, two years old, for avoiding the weeds. It decomposes slowly, and the remaining straw amalgamates with the surface layer of the soil, thus protecting the same from the intense summer evaporations.

Then, he shows me some enormous roses, like the ‘Maria Callas‘ and the ‘Grand siècle‘, with more than 50 petals, the ‘Président Léopold Senghor‘, with a nice dark velvety red, the ‘Centenaire de Lourdes‘, cultivated as a sapling, the ‘Grace de Monaco‘ and the ‘Princesse de Monaco‘, dedicated to the Princesse Grace by the famous French hybridizer Meilland, and he explains me that the rosarium has eight types of roses: great flower, sapling, climbing, pendulous, miniature, hybrids of Floribunda, hybrids of Polyanthas, and the “botanical”, or ancient ones, which differentiate from the others for the big quantity of thorns.

This section, realized with donations of private persons, is concentrated in the northern sector, behind the statue of the Princess Grace. We start from the famous rose ‘York and Lancaster’, born in 1551, to celebrate the end of the War of the Rose, which, for 30 years, opposed the family of the York to that of the Lancaster (the Tudor, a branch of the Lancaster, won, and their red rose has become the emblem of England), and we can admire the famous ‘Jacques Cartier‘, of 1868, and many cultivars, appreciated by the ladies of the belle époque, like ‘William Lobb‘, ‘John Laing‘, ‘M.Me Caroline Testout‘, ‘Thalia‘, ‘Rose à parfum de l’Hay’, and ‘Pink grootendorst‘.

On the wall of the northern gate, is climbing, vigorous, the Rosa longicuspis, a “botanical”, which reaches the 12 metres of height, very diffused in the English “white gardens”.

Its candid flowers, in bunches, were the preferred of the Princess.

The watering, Giovannini explains to me, are done by hand by two gardeners, which follow the plants one by one. The automatic system does not give good results with the roses, and the “drop by drop” one, with small tubes winding on the ground, is unaesthetical and gets easily choked up by the limestone.

We do not use tap water, too much expensive, but that coming from the wells, the same used, each morning, for washing the streets in the city.

In summer, it contains some salt, but the plants do not suffer at all.

Also the proximity to the sea, contrarily to what many think, does not create any problem, some windbreak maritime pines, along the coast and a three metres tall hedge of Cupressocyparis leylandii (a hybrid of Cupressus and Chamaecyparis), are sufficient to protect the rosarium from the saltiness.

I ask then informations about the calendar of the works.

After pruning and manuring of mid January, Giovannini goes on, in March and April, we perform a preventive fungicide treatment, and, starting from May, every 10 days, a sprinkling, composed of fungicides and insecticides. Our main foe, apart the aphids, is the red velvet mite. During the vegetative season, once a month, we administer also small quantities of chemical manure.

And the best time for a visit?

May, of course: the first blooming goes on from the end of April to June 15th. The second one, takes place in July, and the third, which lasts almost till Christmas, begins by the end of September. Unluckily, by mid-August holidays, when we have the maximum quantity of summer tourists presences, the rosarium is almost without flowers.

Are there any particular rarities? I ask.

No, but some “botanical”, all the exposed varieties can be easily found on the market.

After the first period, when we had even 30-40 plants per type, now we try to reduce them to a maximum of 6-7, and we replace, by degrees, the exceeding varieties with famous cultivars, which win contests like Monza, Rome, Geneva and Bagatelle. Each plant has a plastic card with the name of the plant and of the hybridizer: the visitors stop, take note and often get some ideas for their gardens.

To educate to the knowledge and the respect of the plants is one of our main goals, and similar tags, with written over the scientific names, are present in all the public green spaces of the Principality.

A good idea, indeed, which could be propagated in Italy too.