The Botanical Garden of Victoria : history and endemisms of the Seychelles 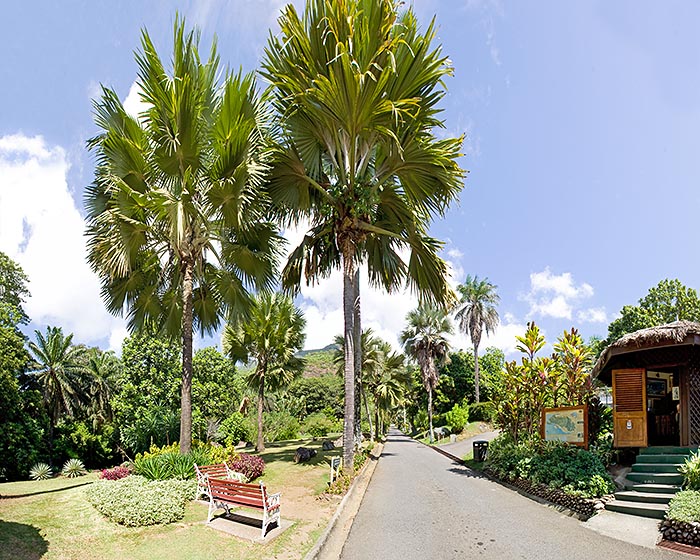 It was born, as many other colonial gardens, in 1901, to test, under the climate of the Seychelles, the plants useful for the agriculture and the economy of that time; the Coconuts, the Oil palms, the Breadfruit, the Mahogany, the Cinnamon, the Coffee, the Cacao, the Vanilla, the Nutmeg, and other spices.

Its director, Paul Dupont, travels, untiringly, from a tropical country to another, and succeeds in filling up, in thirty years, the horticultural void, connected to the geographic solitude of the Seychelles.

But the spirit of modernity has started already from 1980.

Even if maintaining the old geographic structure, with the respect of what has now become a National Monument, the garden opens its gates to the public, and develops the cultivation of the endemic species.

They do not look any more at the agriculture, but to the mass tourism, and to the biodiversities to be protected. They introduce 5 more species of rare palms, which grow up only in the Seychelles, and several local plants, of botanical and historical interest, without neglecting the aesthetic side, with ornamental varieties and never seen before flowers, which astonish, at every turn, the visitors. 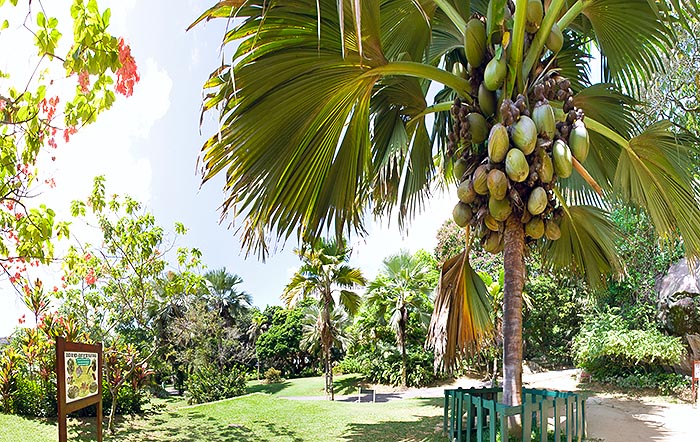 The Coco de mer, planted in 1956 by the Duke of Edinburgh, with about fifty large fruits, which often carry 2 or 3 seeds © Giuseppe Mazza

Due to room reasons, now the serial multiplication, for the spreading and the reintroduction of the local species, is entrusted to the National Biodiversity Centre of Barbarons, which is rising on the western coast of the island of Mahé.

In the mean time, here, the hurried tourists, who cannot afford the islands of Curieuse, Fregate, or Praslin, with the old forest of the Vallée de Mai, discover ther nature of the Seychelles and the mythical Lodoicea maldivica , known also as Coco de Mer, or Coco fesse, which, once, was thought to grow up from the bottom of the sea.

More than 30.000 visitors per year, attracted by the largest seeds of the world, which recall, with meticulous morbidness, in detail, the feminine pelvic anatomy, and by easy souvenir photos of the Giant Turtles, which can even be touched in a great enclosure in the shade of the majestic tree.

Usually, the typical form of the fruits of Coco de Mer is a heart, and they carry, inside, one seed only. But this isolated plant, in a fertile soil and well irrigated, has ever two or three of them, with more or less provoking forms, to the collectors’ enjoyment. Enormous fruits, which take six or seven years to ripe, and can even reach the weight of twenty kilos. After 9-12 months from the fecundation, their size is almost the final one. 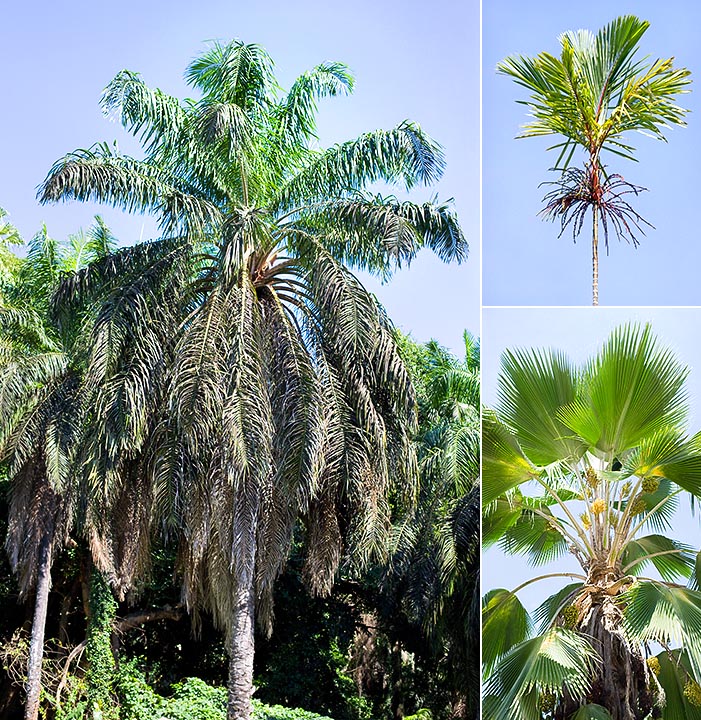 Inside the seed there is a translucent, edible jelly, tasty dessert for billionaires or important visitors, as one fruit costs more than 300 Euros.

Then, the jelly gets thicker, and fills up the whole nut, transforming in a solid “vegetable ivory”.

A good part of the six hectares of the garden is dedicated to the palms. Historical species, time ago cultivated for the fruits, such as the Oil Palm (Elaeis guineensis), utilized nowadays to produce soap, candles, margarine and fuels, or the famous Sugar Palm (Borassus flabellifer) , from which they get, apart the sugar, alcohol, textiles and paper.

It is sufficient to tap the inflorescences, and from these come out, for 5-6 months, 10-20 litres of sap per day. A tasty beverage, which contains the 15% of saccharose. Fermenting, it produces the wine of palm, and, when heated, transforms in syrup and then sugar.

Between the various ornamental species, is conspicuous the thin Cyrtostachys renda, tall as a two-storey house, on a stem of few centimetres, called also Lipstick Palm, due to the scarlet base of the leaves; the famous Bottle Palm (Hyophorbe lagenicaulis) of Mauritius Island, with the stem resembling to a bottle of champagne; and the Fan Palm, of the Fiji Islands (Pritchardia pacifica). 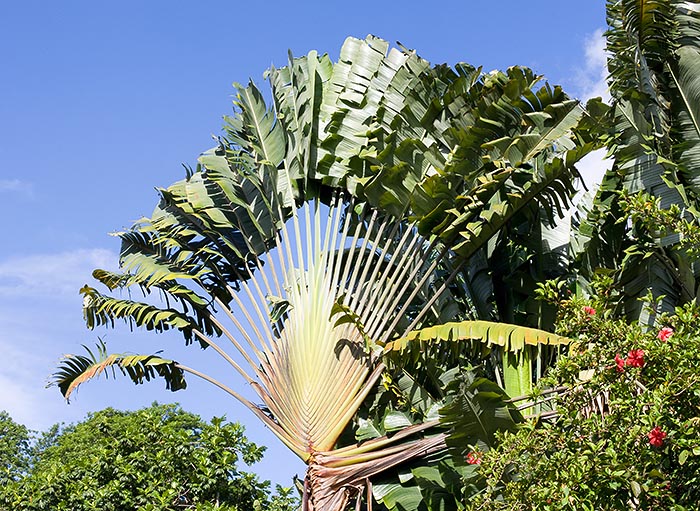 The Traveller’s Tree (Ravenala madagascariensis) is not a palm, but a relative to bananas © Giuseppe Mazza

The garden, interrupted by 14 enormous blocks of granite, 750 million years old, winds around the main drive, which goes up, from the entrance, towards the adjacent forest. On the background, the peak of the Trois-Frères.

On the left, upon entering, stands a very impressive Breadfruit (Artocarpus altilis), loaded of fruits, and then we meet a Ravenala madagascariensis known as the Traveller’s Tree, or Travellers Palm, which, in spite of the appearance and the name, is not a palm, but an herbaceous plant, which belongs, like the strelitzias and the banana trees, to the family of the Musaceae.

Further ahead, an old Mango (Mangifera indica), planted during the colonial time, makes shade to about fifty tourists, while, in front, the Apple of elephants (Dillenia indica), carries strange, roundish fruits, looking like cabbages, from where they get a shampooing.

I hoped to see the great white flower, typical of the unusual family of the Dilleniaceae, but that will happen next time, as the end of May, unluckily, was not the right time. At the Jardin Botanique of Mont Fleuri, flowers and fruits alternate practically all the year round, often in an unpredictable way. 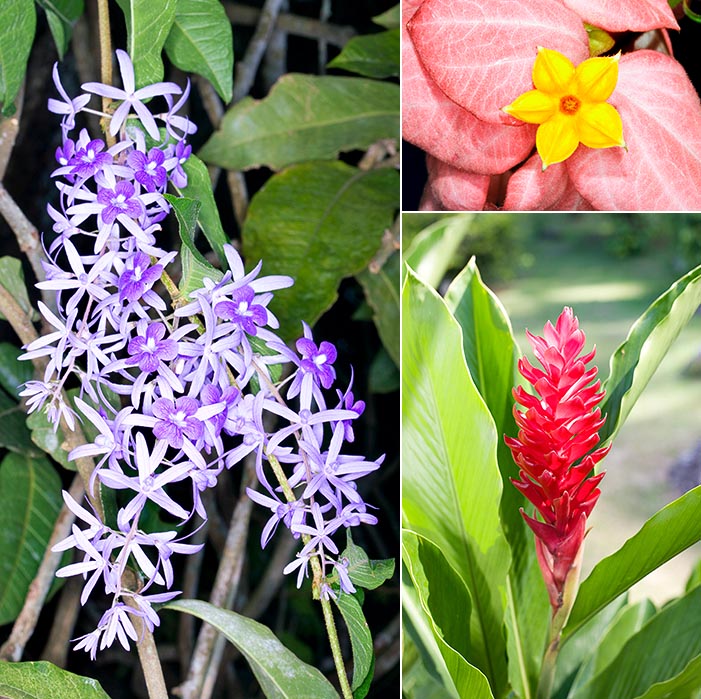 Many species bloom only from December to March, during the rainy season; others when the monsoons change, or even during the driest months, after a few days of rain.

I was impressed by a liana with strange blue flowers, the Petrea volubilis, relative, imagine, to the verbenas; and the unusual Mussaenda erythrophylla, a tropical African shrub, which belongs, like the coffee and the gardenias, to the family of the Rubiaceae.

The flowers, of a perfect star-shaped geometry, carry great red, or pink sepals, which superpose, curved, one on the other, like bananas, almost creating Chinese lanterns.

Among the relatives to the ginger, stand the Etlingera elatior, called Torch ginger or Porcelain rose; the Cheilocostus speciosus, the Spiral Ginger, with huge white petals similar to butterflies; and the Alpinia purpurata, which is blooming almost all the year, with its unique ping or red panicles.

In the mean time, in the small lake, between the water-lilies, an unusual Aracea with its feet in the water, is growing up, the Typhonodorum lindleyanum of Madagascar, which might be thought to be, at sight, a banana-tree. The well known Flamboyant (Delonix regia) bloom in October, and the Jade vine (Strongylodon macrobotrys) strikes for its great green inflorescences. 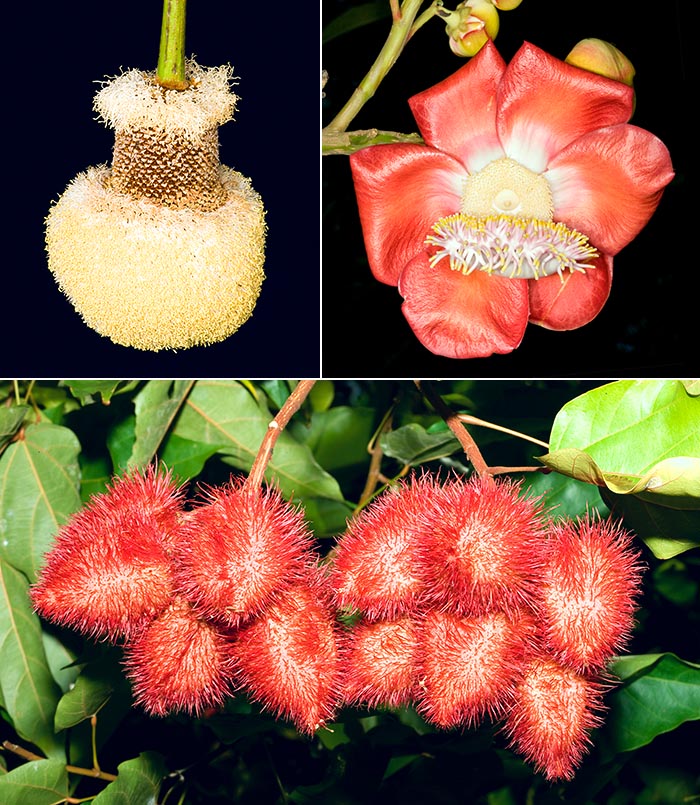 Inflorescence of Parkia javanica, the flower of the Cannonball Tree (Couroupita guianensis), and fruits of Bixa orellana © Giuseppe Mazza

In the upper part of the garden, not far away from the cafeteria, which offers sandwiches and drinks, there is the tree of the Cola (Cola nitida), with its great seeds with pink cotyledons, very rich in caffeine. It has very well naturalized, and is invading the nearby forest.

Little lower, on the right of the booth, it’s easy to find on the ground some strange pompons. They are the fallen inflorescences from the (Parkia javanica), a sumptuous tree pollinated by the Seychelles fruit bat (Pteropus seychellensis).

These great bats, with a tawny fur, spend the day time hanging head down from the trees of the great trees, but are already active one hour before the sunset.

They do communicate through powerful sounds, and fly about over the forest, looking for fruits.

They are attracted by the strange, animal-like flower of the Cannonball tree (Couroupita guianensis).

They eat, like small salads, without too many scruples, the crispy red petals, and the “tentacles” of the flower, which look like sea anemones; but the ovaries surviving to the havoc, are pollinated, and in this way come to life some very heavy spherical fruits, similar to bowls, or old cannonballs.

Not less strange are the fruits of the (Bixa orellana), a tropical American shrub, known also as Roucou or Lipstick tree.

Protected by soft vermilion spines, they are full of small red seeds, which are covered by a wax very rich in carotenoids. They contain vitamin A, selenium, calcium and magnesium, and the are present in the composition of the celebrated “recado rojo”, the spicy Mexican sauce, not to forget the sun creams and the insects repellents.

Their red colour pattern, already utilized by the Indio for showy body paintings, is nowadays known in Europe as E160b, and is utilized to give orange red shades to many hard cheeses and to the haddock fillets. 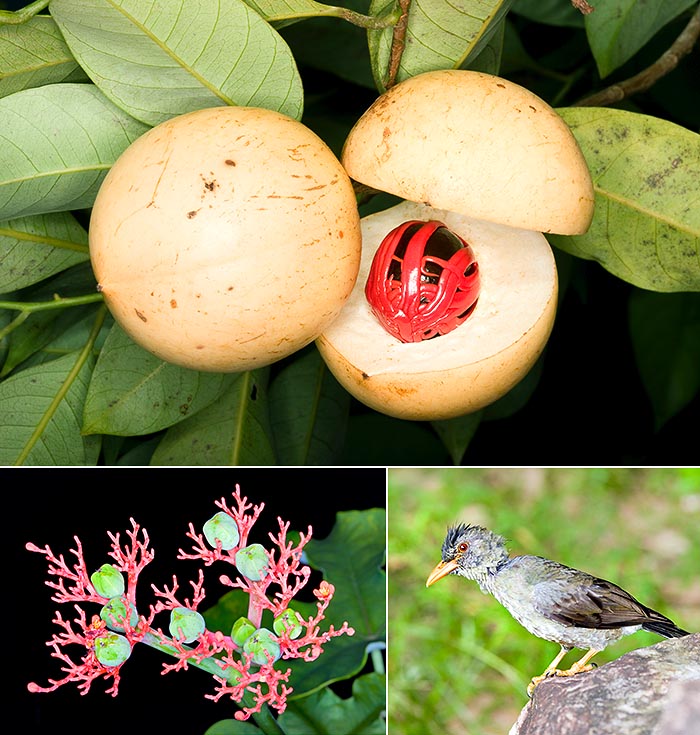 The Nutmeg (Myristica fragrans), the Jatropha podagrica, and the Bulbul of the Seychelles (Hypsipets crassirostris) © Giuseppe Mazza

The famous Nutmeg (Myristica fragrans) is a tree which can be more than 20 m tall.

The fruits, while ripening, open clearly in two parts, with a perfect cut, and point out an aril, with remarkable red venations. Inside it there is a seed, with a thin brown shell, and finally the nut to be grated.

Also the white pulp is edible, as jams or candied fruits, but mainly, with its essential oils, the plant is important in the food industry, the pharmaceutics and the perfumes, with a demand of almost 10.000 tons of fruits per year.

The (Jatropha podagrica), called also Gout plant due to the shape of stem, belongs, like the Christmas star, to the family of the (Euphorbiaceae). When the petals fall down, the inflorescences transform in blazing coral branches, between which the fruits peep out.

Students pass happily through the alleys, and I understand why the Reuters’ Travel and Leisure Magazine has rated the Jardin Botanique du Mont Fleuri at the seventh place between the most beautiful gardens in the World.

Old trees, full of history, but also a place in line with the times, which talks of bio-diversity, of ecology and which spreads the knowledge and the respect for the nature. 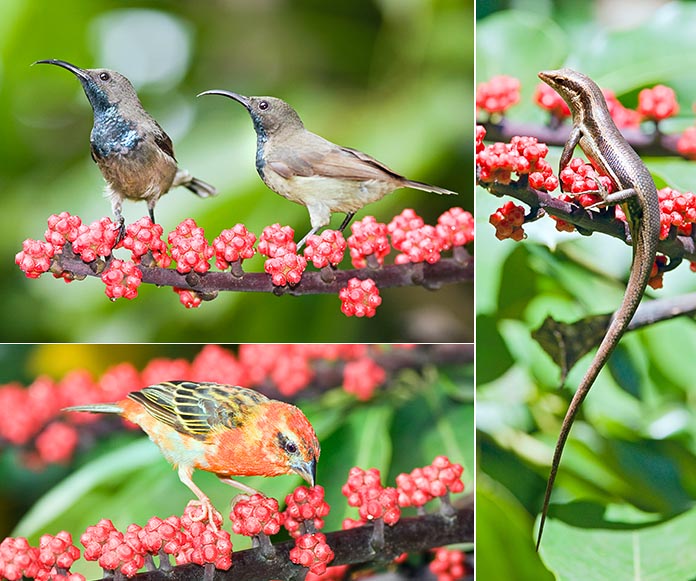 Quite often local persons stop to talk with the gardeners, and leave happily, carrying their small pots of plants for their domestic gardens. For others, it is simply a place where to relax.

The evening was approaching, and I sat down, like them, on a small bench, at the shade of a large Umbrella tree (Schefflera actinophylla), a species with great red inflorescences, rich of sugar, which stand on the top, like an umbrella.

First, the Bulbul (Hypsipetes crassirostris) has appeared, a funny bird which looked at me slyly. Then, a Mabuia (Mabuya sechellensis) has climbed slowly, in the sun, on the inflorescences, while two tiny Sunbirds (Nectarinia dussumieri) satiated with nectar, hardly disturbed by a young male specimen of Weaver (Foudia madagascariensis), which also was looking, before going to sleep, for the stirrup cup.

The sun sets quickly at the Seychelles, and it’s night at once. 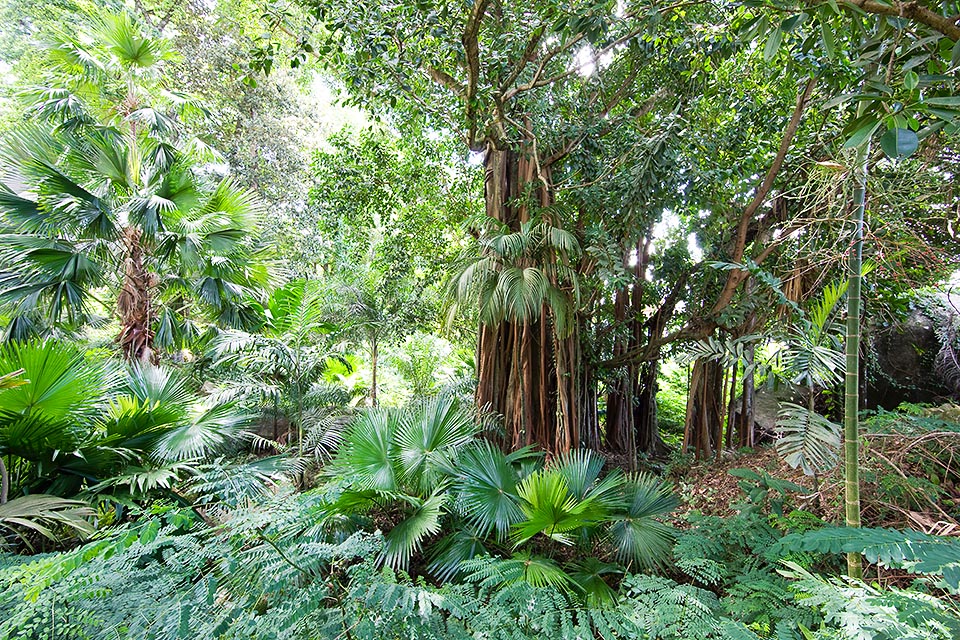 Ficus benghalensis and a view of the upper part of the Garden, by the cafeteria © Giuseppe Mazza

The Botanical Garden of Victoria : history and endemisms of the Seychelles was last modified: June 1st, 2019 by Giuseppe Mazza