Charm of the ancient. The collection of ancient roses of Nino Sanremo enterprise in Italy. 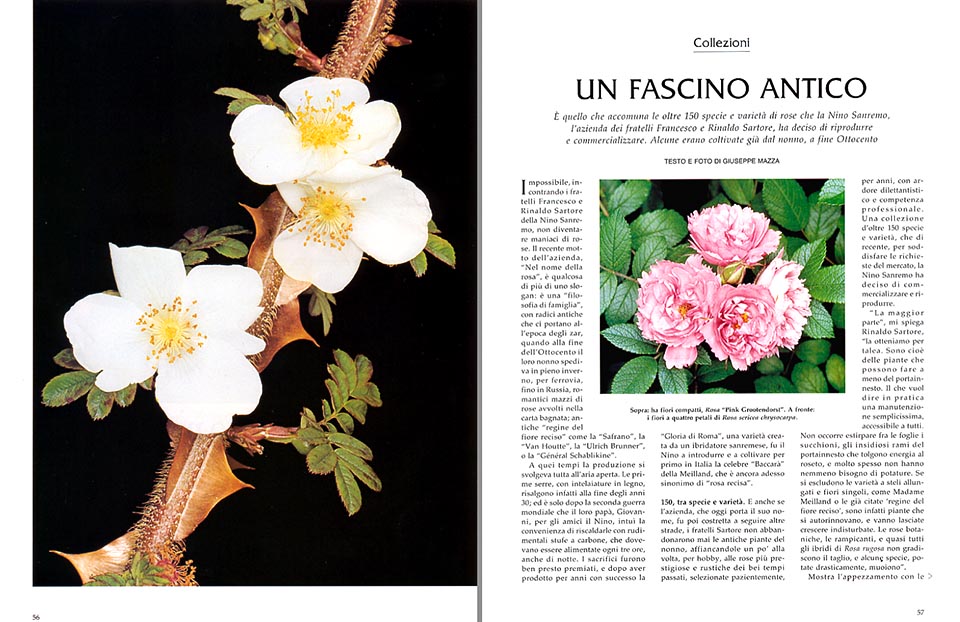 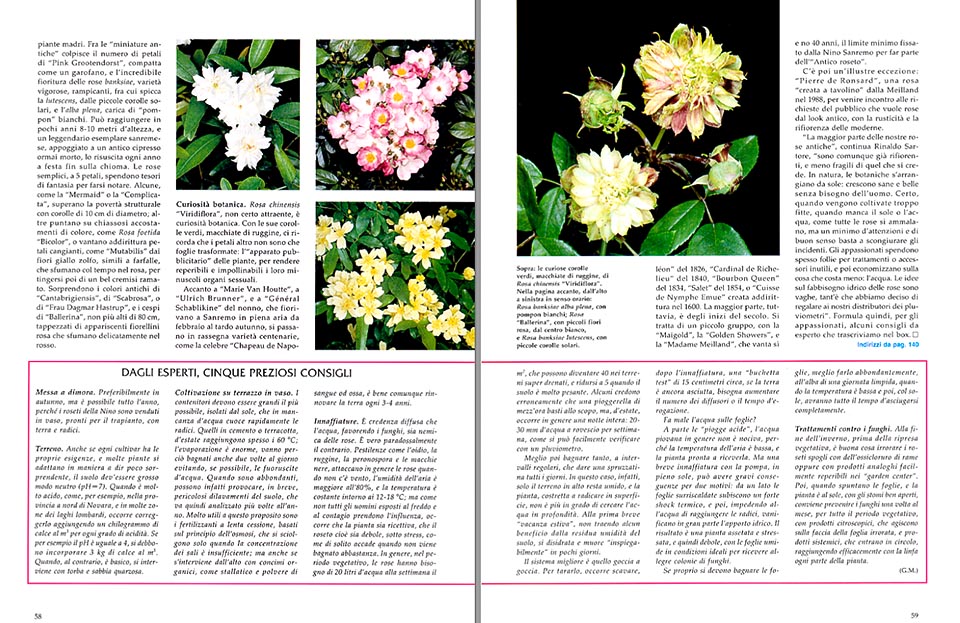 It is impossible not to become fond of roses, when meeting the brothers Francesco and Rinaldo Sartori, of the NINO SANREMO.

The recent motto of the farm, “In the name of the rose”, is something more than a slogan: it’s a “family philosophy”, with old roots, which take us to the time of the czars, when by the end of the nineteenth century, their grandfather was despatching, in the depths of winter, by train, to Russia, romantic bunches of roses wrapped in wet paper, old “queens of the cut flower”, such as the ‘Safrano’, the ‘Van Houtte’, the ‘Ulrich Brunner’, or the ‘General Schablikine’.

In those times, the production took place, all, in open air. The first “greenhouses”, with wood frameworks, date back, in fact, to the end of the thirties; and it is only after the second world war, that their dad, Giovanni, Nino, for the friends, realized the convenience of warming them up with rudimentary coal stoves, which had to be nourished every three hours, even during the night.

The sacrifices were, quite soon, rewarded, and after having produced for years, with success, the ‘Gloria di Roma’, a variety created by a San Remo hybridizer, it was Nino who introduced and cultivated, for the first, in Italy, the famous ‘Baccarà’, of the Meilland, which is still now synonym of “cut rose”.

And even if the farm which now bears his name, was later on compelled to follow other ways, the brothers Sartore never left the old plants of grand-dad, placing them, side by side, little by little, as a hobby, with the most prestigious and rustic roses of the good old days, selected with patience, for years, with an amateurish fervour and professional expertise. A collection of more than 150 species and varieties, which, recently, in order to satisfy the requests of the market, the NINO SANREMO has decided to commercialize and reproduce.

We get the most of them, Rinaldo explains to me, directly by cutting. They are, therefore, plants which can do without the graft carrier. Which means, practically, a very simple maintenance, accessible to everybody.

It is not necessary to identify and extirpate periodically between the leaves the “basal shoots”, the insidious branches of the graft carrier, which deduct energy from the rosary, and very often, they do not even need pruning.

If we exclude the varieties with prolonged stems and single flowers, like the ‘Peace’, or the already cited “Queens of the cut flower”, they are in fact plants which are self renewing, and must be left growing undisturbed.

The botanical roses, the climbers, and almost all the hybrids of Rosa rugosa, do not appreciate to be cut, and some species, like the Rosa sericea omeiensis, if pruned drastically, will die.

He shows me the piece of ground with the mother plants. Between the “ancient miniatures”, strikes the number of the petals of the ‘Pink Grootendorst’, firm as a carnation, and the incredible flowering of the roses banksiae, strong varieties, climbers, between which is conspicuous the “Lutescens”, with the little sunny corollas, and the “Alba plena”, loaded of white pompons.

It can reach, in a few years, the 8-10 metres of height, and a legendary San Remo specimen, leant on an old cypress, now dead, resuscitates it, every year, like on a feast, up to the top.

The simple, 5 petals roses, spend treasures of fantasy for being noticed. Some of them, like the ‘Mermaid’, or the ‘Complicata’, overcome the structural poverty, with corollas of 10 cm of diameter; others wager on gaudy matchings of colours, such as the Rosa foetida bicolor, or boast even some changing petals, like the ‘Mutabilis’, with sulphur yellow flowers, similar to butterflies, which, with the time, gradate to the pink, to finally dye with a nice auburn crimson.

Are surprising, the ancient colours of the ‘Cantabrigiensis’, of the ‘Scabrosa’, or of the ‘Frau Dagmar Hastrup’, and the tufts of the ‘Ballerina’, not taller than 80 cm, covered of small pink flowers, changing to the red.

The Rosa chinensis ‘Viridiflora’, by sure not attractive, is a botanical curiosity. With its green corollas, spotted of rust, reminds us that the petals are not anything else than transformed leaves: the “advertising apparatus”, of the plants, to render easily available and ready for the pollination their little sexual organs.

Close to the ‘Marie Van Houtte’, the ‘Ulrich Brunner’, and the ‘General Schablikine’, of the grandfather, which were blossoming in San Remo in open air from February to late autumn, I pass in review centenarian varieties, like the famous ‘Chapeau de Napoléon’ of 1826, the ‘Cardinal de Richelieu’ of 1840, the ‘Bourbon Queen’, of 1834, the ‘Salet’, of 1854, or the ‘Cuisse de nymphe emue’, created, even, in 1600.

Most of them, nevertheless, coming from the beginning of the century, are a small group, with the ‘Maigold’, the ‘Golden showers’, and the ‘Peace’, maybe, 40 years old, which is the minimum limit of age, fixed by the NINO SANREMO for belonging to the “Old rosary”.

There is, then, an illustrious exception: the ‘Pierre de Ronsard’, a rose “created on the table”, by the Meilland, in the “remote” 1988, to meet the requirements of the public, which wants now roses with an old look, with the rusticity and the reflourishing of the modern roses.

Most of our ancient roses, Mr. Rinaldo, continues, are, in any case, already reflourishing, and less frail of what is thought. In the wild, the botanical ones, manage to get along by themselves: they grow up healthy and nice, without needing the man.

By sure, when they are cultivated too thick, when the sun or the water, lack, as all the roses, they get sick, but just a little of cares and of common sense is sufficient to avert accidents.

It looks incredible, the enthusiasts often incur great expenses for unnecessary treatments or accessories, and then, economize on the cheapest thing: the water. The ideas about water requirements of the roses are very hazy, and the over confidence is great; so that we have decided to give as a present to our distributors some pluviometers, and only a couple of them have asked for them.

He then formulates to me, for the enthusiasts, some suggestions as expert in the matter.

Preferably in autumn, but it is possible all the year, because the rosaries of the NINO are sold in pot, ready for transplanting, with land and roots.

Even if each cultivar has its own exigencies, and many plants adapt, in a surprising way, the soil must be, roughly, neutral, that is, with a pH equal to 7. When it is acid, as in the province north of Novara, and in many zones of the Lombardia Lakes, it is necessary to rectify it adding one kilogram of lime per m³ for every grade of acidity. If, for instance, the pH is equal to 4, we have to incorporate 3 kg of lime per m³. When the soil is basic, we have then to add, on the contrary, peat and quartz sand.

CULTIVATION IN POT ON A TERRACE

The containers must be as much great as possible, isolated from the sun, which, if water lacks, would quickly cook the roots. Those in cement or terracotta, reach often, in summer, the 60 °C; the evaporation is enormous, and must be watered twice a day, avoiding, if possible, the overflows of water.

When they are abundant, in fact, they can cause, in short time, dangerous washing away of the soil, which is, therefore, to be analysed several times a year.

Very useful in this matter, are the fertilizers with slow cession, based on the principle of the osmosis, which dissolve only when the concentration of salts is insufficient; but if even we intervene from the top with organic manures, like the stable one, and blood or bones powder, it is better to renew the land every 3-4 years.

It is widely thought that water, favouring the fungi, is an enemy of the roses. Paradoxically, it is exactly the contrary.

Pests like the Powdery mildew, the Rust, the Peronospora, or the Black Black spots, normally attack the roses when there is no wind, the humidity of the air is over 80%, and the temperature is constantly around 12-18 °C, but, like not all men who are exposed to the cold and the contagion, do not catch the flu, it is necessary that the plant is receptive, that is, that the rosary is weak, under stress, as usually happens when it is not watered enough.

Generally, during the vegetative period, the roses need 20 litres of water per week, for each m², which may become 40, in over drained soils, and reduce to 5, when the soil is very heavy.

Some do erroneously think that a drizzle of half an hour, is sufficient, but in summer, generally, it is necessary a whole night: 20-30 mm of water in downpour per week, as can easily be verified with a rain-gauge.

Better, then, to water a lot, by regular intervals, rather than a light spray every day. In this case, in fact, only the upper layer of the soil remains wet, and the plant, compelled to root in surface, is not any more in condition to look for water in depth.

At the first short “summer holiday”, not getting any benefit from the residual humidity of the ground, it dehydrates and dies “inexplicably”, in a few days.

The best system is the one drop by drop. For regulating it, it is necessary to dig, after the watering, a “test hole”, of 15 cm, and if the land is still dry, we have to increase the number of the diffusers, or the time of delivery.

Is water dangerous to the leaves?

Apart the “acid rains”, the rainy water, generally, is not harmful, because the temperature of the air is low, and the plant ready to receive it. But a brief watering with the pump, in full sun, can have serious consequences for two reasons: on one hand the leaves, overheated, suffer from a major thermic shock, and then, hindering the water to reach the roots, renders useless almost all the contribution of water.

The result is a plant, thirsty and stressed, and consequently, weak, with humid leaves in ideal conditions for receiving gay colonies of fungi.

If you really have to water the leaves, better then to do it abundantly, at the dawn of a clear day, when the temperature is low and then, with the sun, they will have all the time for drying up.

By the end of winter, before the vegetative renewal, it is a good thing to sprinkle the bare rosaries, with the verdigris or similar products easily available in the “Garden centres”.

Then, when the leaves come out, and the plant is in the sun, with the stomata wide open, it is convenient to prevent the fungi, once a month, during the whole vegetative period, with products which operate on the side not wet of the leaf, systemic products which enter the circulation, reaching efficaciously, with the sap, every part of the plant.