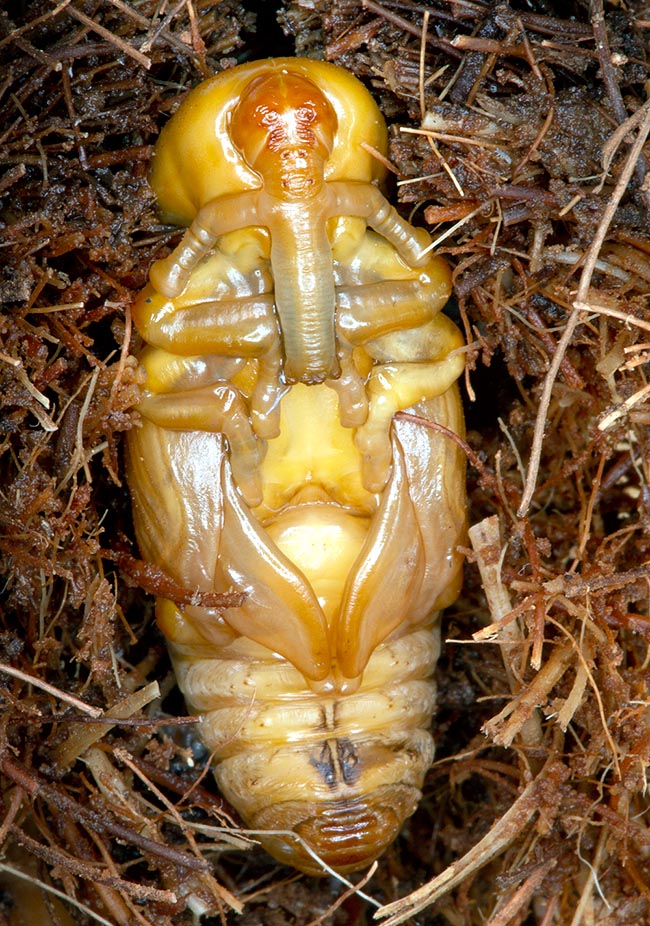 An alien or a strange Egyptian mummy? No, it is a pupa of the Red palm weevil (Rhynchophorus ferrugineus) inside the solid cocoon made of fibers of palm, woven patiently for protecting during the 30 days of metamorphosis © Giuseppe Mazza

The now sadly known, Red Palm weevil (Rhynchophorus ferrugineus) Olivier (1790) is an insect belonging to the order Coleoptera, to the superfamily Curculionoidea and to the family Dryophthoridae, Carl Johann Schönherr (1772-1848), that includes five subfamilies.

The genus name Rhynchophorus comes from the Greek “rynchos” beak and “fòros” to carry, whilst that of the species ferrugineus means in Latin rust-coloured.

The first time that the Red Palm weevil did attract the attention of somebody happened for purely scientific reasons. Later on, during the first months of 1891, a report was published by the Indian Museum Notes.

The interest increased due to the extensive damage suffered by the coconut palm (Cocos nucifera) and in 1906 the Lefroy deepened the issue, so much to call it mortal pest of all coconut palms of India.

Its unstoppable expansion had presumably originated in those warm regions of the Planet, that is in south-eastern India and in Melanesia.

The climate change, but also the little human foresight, stand often at the more or less lasting origin of many nature imbalances.

Certain treatises concerning the behavior of the Red Palm weevil should not refer only to a certain territory, but rather the real habits of this parasite, highlighted in multiple occasions.

Whilst in India the damage was suffered almost exclusively by the coconut palm, in Europe the insect has well found other sources of food, much more vulnerable and attractive.

It is in this way that the Canary Island date palm (Phoenix canariensis), favorite species of our landscapes, but also of the Red Palm weevil, has begun its sad final parable.

It should be a fatal mistake limiting to fight the phenomenon locally, pretending to ignore that the precise definition of the insect is: Red Palms weevil; not of only a certain palm. The destructive sequence it has followed proves this. In 1920, in Iraq, was wiped out the Date palm (Phoenix dactylifera), as well as in 1985, in the United Arab Emirates, where were compromised all the cultivations.

From 1992 onwards it has invaded completely the territories, starting from Morocco, then Algeria, Libya, then Israel, Jordan, up to Syria. In these zones it has begun to expand its tastes towards various ornamental species. 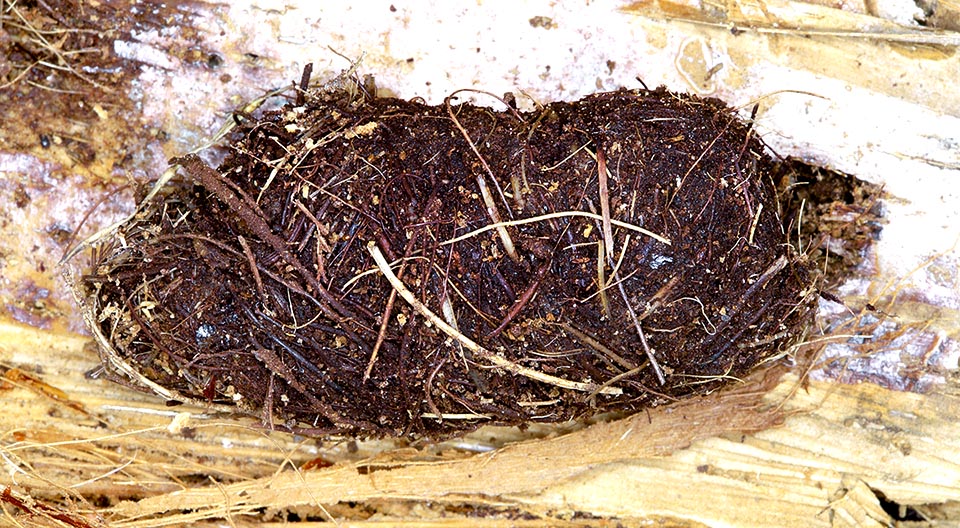 Perhaps it is a cocoon like this one, hidden inside a trunk of palm, that has arrived up to us from south-eastern India or from Melanesia © Giuseppe Mazza

Immediately after, it has reached Europe, initially in the Canary Islands, where it has met a weaker species, but appreciated, that is, rightly, the Canary Island date palm (Phoenix canariensis). It proves this, perhaps, the unusual stop of some years after its appearance in Spain (1994).

The final invasion of the Mediterranean area territories has taken place starting from 2004 with a presence proved to be disastrous and deceitful, almost at the same time, in Portugal, in France (Corsica included) and in Italy, where from 2005 to 2012, the invasion has been able to cross the whole peninsula, starting from Sicily and Sardinia, then Basilicata, the Veneto and Tuscany, with more than a thousand of Municipalities involved.

But not only this. The parasite has gone even further, up to Greece and Turkey, even Malta and Cyprus. We can affirm that all the zones of the world, where the various types of palm have diffused; have been finally reached. 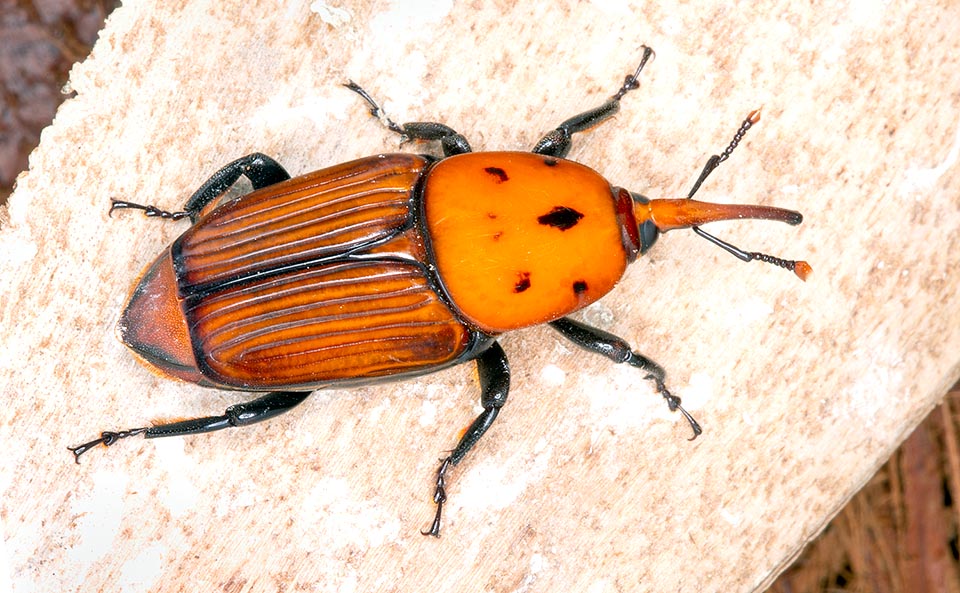 This is a female, about 3,4 cm long, capable to lay even 300 eggs, inserting them into the interstices of the trunk or in the parts yielding after the cutting of the leaves © Giuseppe Mazza 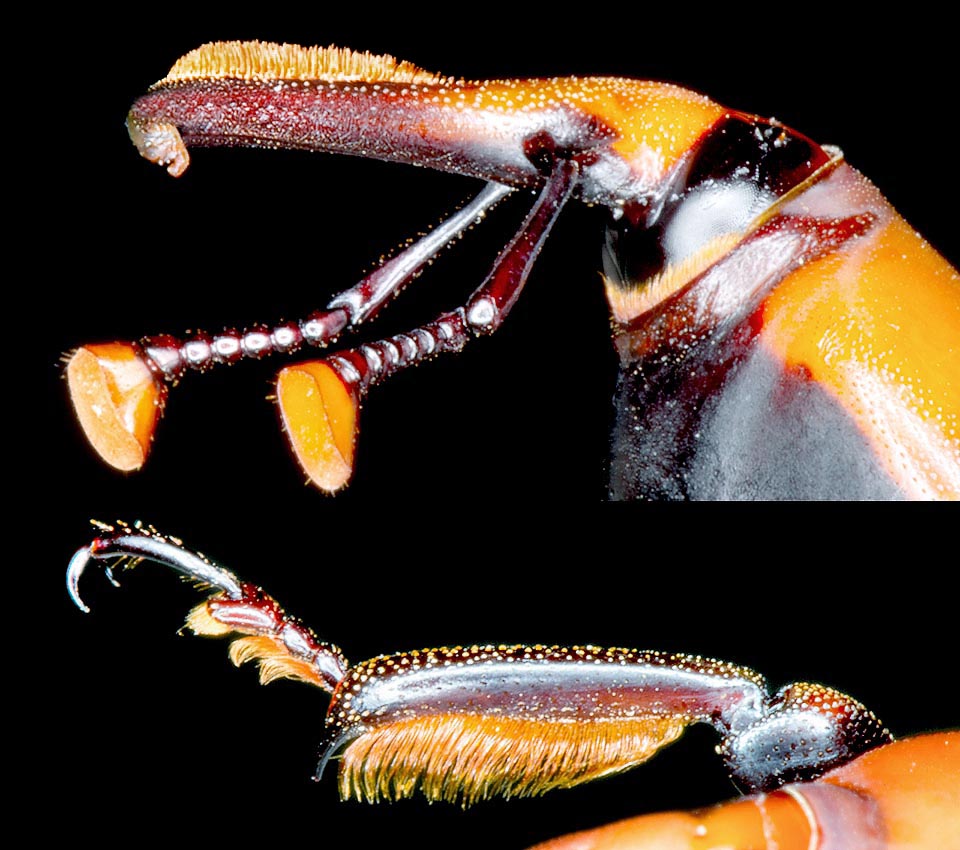 The male, slightly smaller, distinguishes due to the presence of a thick series of bristles well visible on the rostrum and on the fore tibias © Giuseppe Mazza

To recognize an infested palm in fact avers very difficult, as before that do appear some important symptoms some months are needed. Initially the yellowing of the leaves, especially apical followed by the wilting, until, before the final desiccation, that confers them their collapsed appearance, similar to a toupee, the lowest branches begin to lean towards the trunk. The terminal phase is sadly visible, when the crown, practically pollarded, presents a dry crown in phase of detachment.

From that moment, the palm becomes a sort of nursery, from which will depart, during the night, hundreds of insects looking for weaker specimens where to reproduce, but not disdaining the stronger ones. 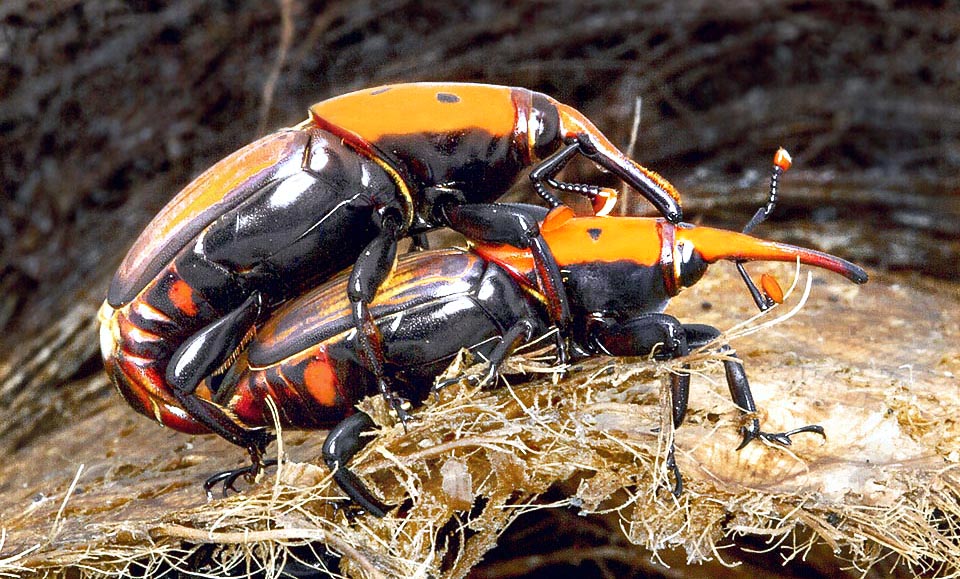 Mating. The Red palm weevil reproduces in a continuous cycle and completes its development from the state of egg to adult one in tree or four months © Giuseppe Mazza

The life of an insect adult, averagely of six months, cannot be considered as short. And we do not have absolutely to underestimate its power and flight resistance, being able to cover some kilometers of distance without stopping.

After the parasite has settled stably in the plant, there are no really effective treatments, and when we talk of using promising techniques it’s because we are reasoning only for despair. The recent use of the entophytic fungus Beauveria bassiana (Bals. Criv.) Vuill, or similar, and of traps with pheromones has given not totally satisfaying results; more expensive than useful.

In our latitudes the size of the adults goes in the male from a length of 3 cm per one of width; a little more in the female: about 3,4 cm per 1,3. 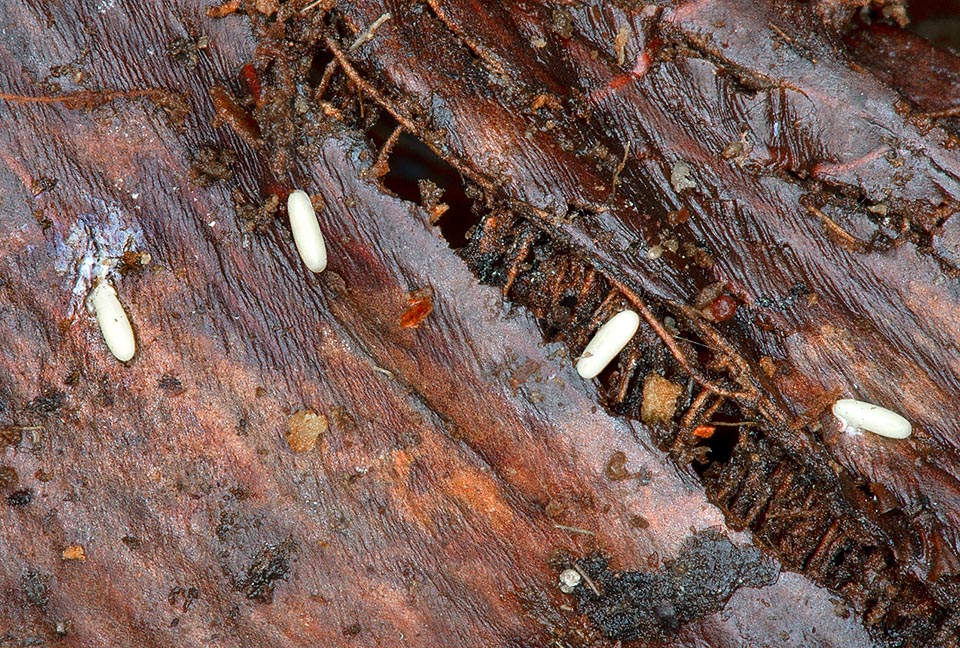 Freshly laid eggs. In only 4-6 days the small larvae are already born, to become some perfect hungry miners © Giuseppe Mazza

Usually, the base colour is rusty red or reddish brown with small black dots on the pronotum, same colour as the legs. Characteristic of the family is the presence of the “curculio”, organ that prolongs the head to form a sort of pointed beak, on which are also the antennae. This rostrum has the function of penetrating into the woody substances and its apex forms the chewing apparatus.

On the rostrum of the male we can note the presence of a thick series of bristles, such to look darker on the tip and a down observable also on the fore tibias, particularity absent in the female.

Given that the Red palm weevil does not follow a precise seasonal rhythm, but reproduces in a continuous cycle, compatibly with a suitable temperature, completes its development from egg to adult in three or four months. 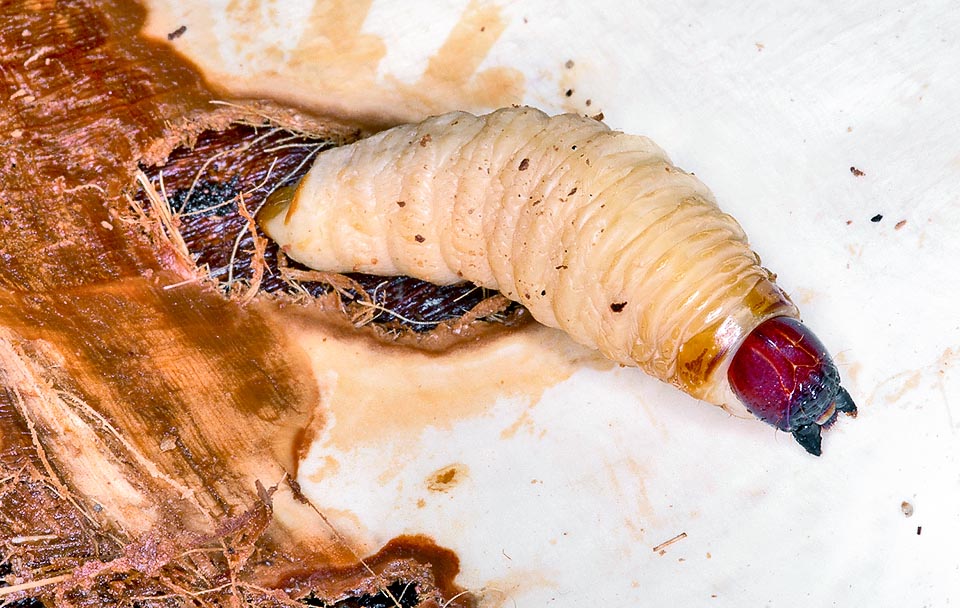 Here one at work. After a maximum of three months the larvae cover of a resistant cocoon, made of fibers of palm, even 6 cm long © Giuseppe Mazza

The fact that the females are polygamous only increases their prolificacy. They lay an average of 300 eggs, inserting them into the interstices of the trunk or in the yielding parts, consequent to the cutting of the leaves.

In only 4-5 days the small larvae are already in the world, to become perfect hungry miners. Tunnels and ample spaces intersect deeply in the trunk, interlacing paths of countless larvae, to reach the collar of the palm.

After a maximum of three months the larvae clothe of a resistant cocoon, made of fibers. The length of these objects can reach the 6 cm, per 2,5 of width. The pupa inside, outline of the final insect, is of yellowish light brown colour. About thirty days will be necessary to become adult. 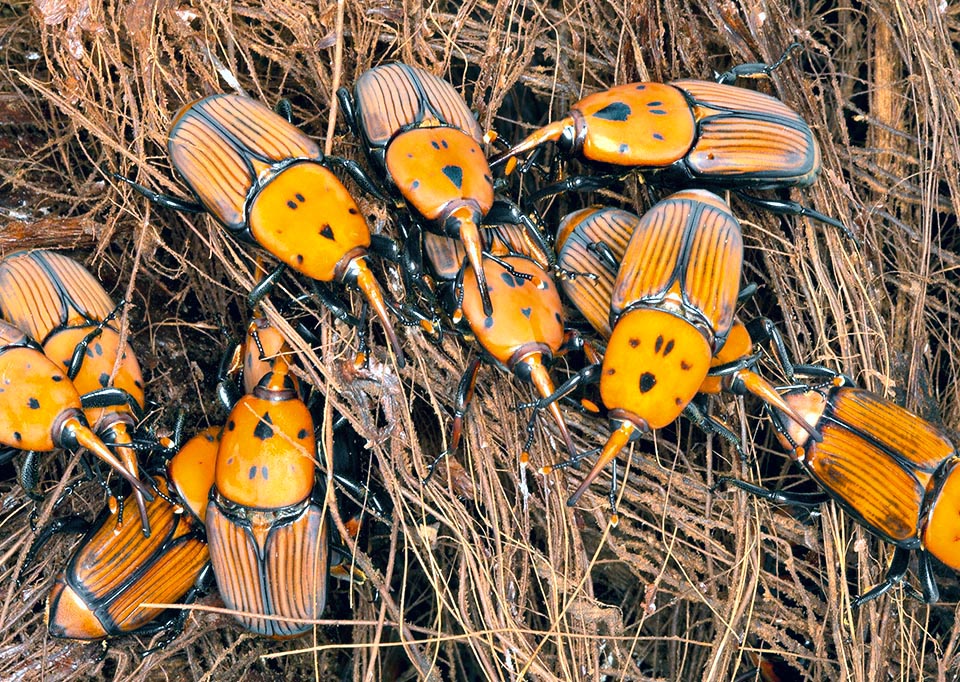 Cheerful gathering on a palm. The males produce an aggregating substance, the “ferrugineol” that attracts the missing multiplying the reproductive capacities © G. Mazza

To fully exploit the banquet appears an aggregating substance produced by the male, the “ferrugineol”, that induces the still isolated individuals to join the new colony. Many individuals of both sexes, grouping, improve the performances and even the duration of life.

The species of Washingtonia, for some time considered as immune have turned out to be themselves vulnerable. The apparent difficulty of aggression does not depend, as it had been hypothesized, by special defensive substances, but most probably by the foliar coverage, that does not favor the access of the insect.

Other particular preferences concern the Phoenix canariensis, whose male is aggressed at least one year before the female and usually the specimens attacked by the red palm weevil must be at least seven meters tall. 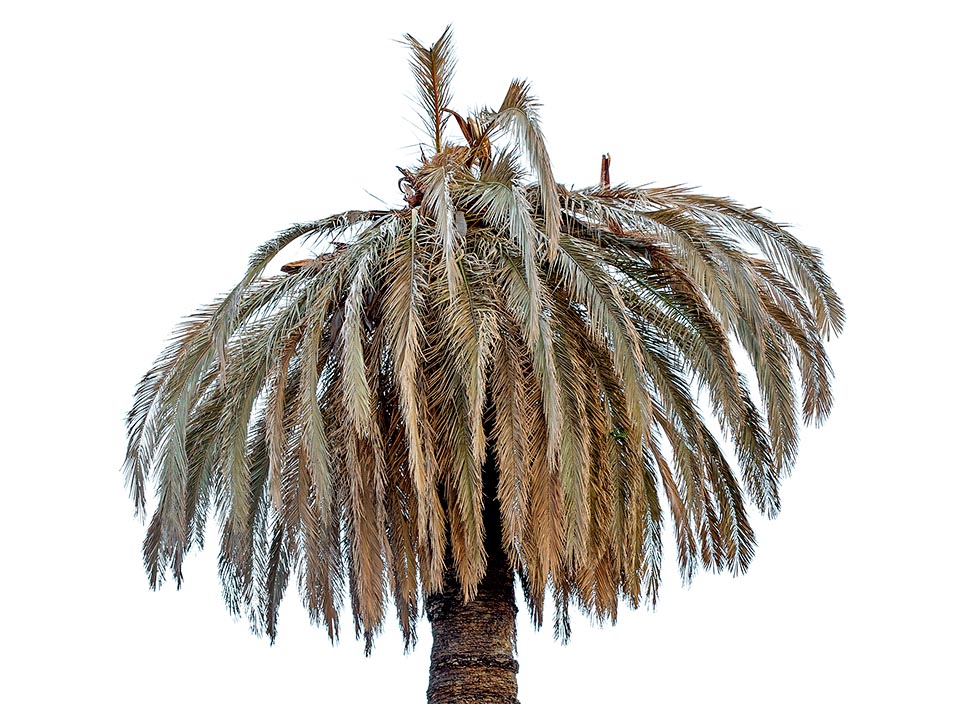 Today unfortunately it is not rare to find a Phoenix canariensis with a collapsed look, similar to a wig, killed by the inexorable Red palm weevil. The rotting trunk becomes for months a sort of nursery, from which depart, flying, during the night, hundreds of adult insects ready to attack other palms in increasingly larger territories © G. Mazza

The cleaning and the periodical pruning of the Phoenix canariensis, produce the emission of attractive substances that have rendered more palatable the species. We can add that the presence of the black rat (Rattus rattus), with erosions to the fronds where it nests, may can encourage considerably the infestation.

It is useful to remind that also other species do exist, relative to the Rhynchophorus ferrugineus, that might expand in the same way, with other nefarious modalities.

For instance, the American insect Rhynchophorus palmarum, also vector of very harmful nematodes. This should arouse more interest for the prevention. Besides some still ongoing speculations, it should have been determinant a precise preventive plan, at least one year before the arrival of our predator of palms. Many palms could still be now alive by preparing the plants with adequate long-releasing substances injected into the trunk.